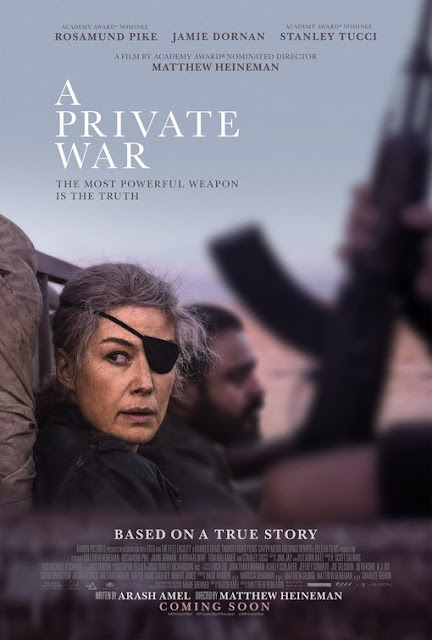 It feels like the grim tone of A Private War was always gonna be a barrier to it becoming a widely-seen domestic box office hit but it's still a pity this feature came and went in such a quick fashion back in November 2018. Topping out at only $1.6 million, A Private War was one of the worst-performing wide releases of 2018 and one of a number of recent releases from Aviron Pictures (alongside Serenity and After) to go belly-up at the box office. As everybody knows, though, box office grosses are not an exact barometer for quality and A Private War is actually a well-made war drama that deserved far more attention than it got.

Based on the real life of Marie Colvin (Rosamund Pike), A Private War follows journalist Colvin over the course of eleven years from 2001 to 2012. Colvin is a writer who travels to war zones and other dangerous areas so that she can report to the world first-hand accounts on what's going on in the most important conflicts on the planet. It's an important job, but also a dangerous one, as seen by how the film opens with Colvin losing her left eye. That's only the start of the personal problems Colvin experiences as a result from her journalism experiences, which also include bouts of intense PTSD. Even while dealing with all of that, though, Colvin keeps on returning to these life-threatening journalism assignments.

The question of whether Colvin is constantly going back to these assignments as part of a noble duty to provide information to the world or because she can't live without the assignments themselves (or even a mixture of the two) is pondered throughout Arash Amel's screenplay in its thoughtful warts-and-all exploration of Marie Colvin that doesn't shy away from showing her vulnerabilities as often as it depicts her journalistic achievements. I'm always fascinated by biopic films that actually try to approach real-world subjects this sort of complex manner, it's a great reminder of how history is etched not by untouchable demigods but rather by normal people like you, me and Marie Colvin.

Amel's script is all-around commendable in its depiction of Colvin's personal life but it's especially adept at tackling the psychological turmoil Colvin endures as a result of her job. A brief scene showing Colvin calling her friend because she can't stop herself from constantly seeing the image of a corpse from a recent journalism assignment is unnerving without teetering over into exploitative. The way Amel's writing maintains that balance is echoed in Rosamund Pike's tremendous lead performance. Among this performances many exceptional qualities is how well Pike manages to bring Marie Colvin's mental health struggles to life in a thoughtful manner.

Pike approaches this part of Colvin with a deft hand that serves as one of the best demonstrations for the level of quality she brings to the role as a whole. Really, if there's any reason to see A Private War, it has got to be Rosamund Pike's lead performance. That's not meant as an insult to the rest of the noteworthy film which is full of remarkable qualities, from the way Pike conveys Colvin's gradually increasing sense of weariness as the film goes on to a sequence, done in one extended take, where Colvin finally opens up about her contradictory nature as a person. In this sequence, Pike's delivery of this crucial dialogue subtly and gut-wrenchingly captures just how hard it is for Colvin to open up like this. Good luck finding even the slightest trace of Pike's past work as a performer in this scene and anywhere else in A Private War, she vanishes into this role to an outstanding degree.

That scene of Colvin opening up is a fine sampler of director Matthew Heineman's visual approach as a filmmaker which entails prolonged shots that are frequently done to allow for the danger of Colvin's assignments to be felt as powerfully as possible. This is especially apparent in a brilliantly executed climactic sequence depicting Colvin and fellow journalist Paul Conroy (Jamie Dornan) navigating a Syrian battlefield while the camera follows closely behind them in a wide single-take that truly allows one to be immersed in what these characters are going through. It tragically came and went without a trace at the box office, but now is the time to catch up on all the terrific directing and acting found in A Private War (especially since it's now streaming on Amazon!) It's a grim affair for sure, but it's an important one to watch given what a timely reminder it is of how important normal human are in bringing truth to the wider world.
Posted by Douglas Laman (NerdInTheBasement) at 9:18 AM