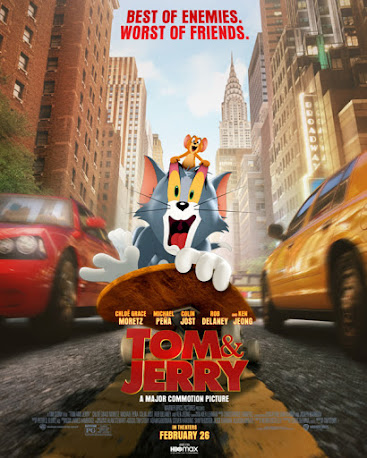 There's not much to the characters of Tom & Jerry, is there? As the theme song to Itchy & Scratchy once said, "They fight, they bite, fight fight, bite bite". That's about it. That's just fine for 10-minute shorts that would air before movies in the 1940s. But it's hard to imagine the duo being able to sustain a 100-minute movie in 2021. Tim Story's Tom & Jerry doesn't make a compelling argument for the pair actually having that gift. If anything, it suggests that, like so many classic cartoon characters who get called up for live-action/CGI hybrid movies, maybe this cat and mouse duo were better off in short films.

In their first-ever live-action film (though second theatrical feature-length adventure) Tom and Jerry are pursuing their grand ambitions in New York City. Tom wants to achieve his dreams of being a big-time piano player, Jerry just wants a place to call home. At the same time, Kayla (Chloe Grace Moretz) has conned her way into a job at a fancy hotel under the watchful eye of Terrance (Michael Pena). This hotel is where Jerry has taken up residence, sending the hotel staff into a panic as they prepare for the glitzy wedding of Ben (Collin Jost) and Preeta (Pallavi Sharda). The typical mouse and cat shenanigans will prove especially hazardous in this environment, though it won't inspire much in the way of original gags.

Screenwriter Kevin Costello has largely resisted the urge to update Tom & Jerry as characters, but that's part of the problem. It's nice that Tom & Jerry aren't doing dances straight out of TikTok but Costello is content to rehash gags straight from the old gags. Rather than coming up with new form of brutal slapstick for the duo to engage in, he's just giving viewers big-screen reruns to digest. Even worse, his script feels like it was put together by an A.I. inspired by other kids movies. The New York City backdrop that was used in movies like The Smurfs? It's here. Extended bouts of bathroom humor? Yep. Bizzare needle-drops of songs that don't fit the tone of the movie? Also here.

The only thing that's really unique here is that the computer-animated used to render Tom & Jerry as well las all other animals attempts to mimic classic hand-drawn animation. At times, it looks spot-on and fools one into thinking they're actually watching vintage animation. Too often, though, it's distracting in how much it comes up short. Characters that aren't either Tom or Jerry especially look off. Whether it's because of the designs or how they blend into live-action environments, these characters just look like they came from a level in Taz: Wanted. In an era where The Peanuts Movie and Spider-Man: Into the Spider-Verse exist, there's no excuse for the shoddy erratic animation seen in Tom & Jerry.

Without much in the way of impressive animation to distract your attention, it becomes readily apparent just how empty Tom & Jerry is. It’s an obligatory branding exercise that doesn’t even have the decency to be fun while it goes through the marketing motions. The story is way too rigidly constructed to adhere to the rough and tumble anarchy that marked the best Tom & Jerry shorts. Even the youngest kids will be able to pick up the plot beats a mile away and Tim Story’s execution of that story offers up nothing fun to excuse the derivativeness. It’s boilerplate filmmaking for a boilerplate story.

Worst of all, the whole thing wastes the time of Chloe Grace Moretz and Michael Pena, actors who could have easily spent their time better than acting off generic cartoon slapstick antics. In an age where Paddington exists, something like Tom & Jerry has no excuse being this flat. When the best thing you can say about a movie is that it's better than Yogi Bear, you've got a problem.