In Laman's Terms: forget COVID-19 movies, musicals are the future of post-pandemic cinema 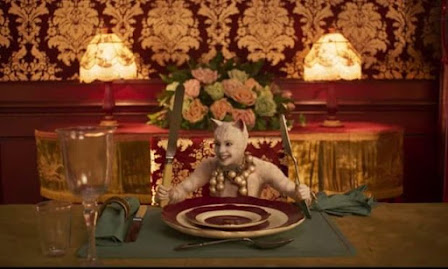 Like Doctor Manhattan talking about the regular o'l mortal humans of Earth, I'm tired of all these COVID-19 movies.

We've already gotten Songbird and Locked Down but each day seems to bring news of a new feature film fixated around the ongoing COVID-19 pandemic. Judd Apatow is doing a movie about actors trying to social distance during the pandemic. There's a whole slew of movies about the whole GameStop "Stonks" thing that will inevitably focus heavily on COVID-19. On and on the list goes as Hollywood is convinced that this terrifying event that's cost hundreds of thousands of lives across the globe can be turned into entertainment. Tell me, when this is over, who is going to want to go to a movie theater and pay cash to see a movie about a cataclysm they just experienced?

The future of movies isn't movies about the COVID-19 pandemic. But that doesn't mean this health crisis won't impact what kind of movies audiences will want to see. In fact, there's a genre of filmmaking that could be the perfect outlet for escapist entertainment in the wake of the pandemic.

This is a genre of entertainment that's always proven to be useful in helping people to escape the worries of harsh reality. Just look at how much the genre flourished in the wake of the horrors of World War II. The grim noirs of the 1940s were surpassed by glitzy musicals where Judy Garland and Gene Kelly sang their way into people's hearts. While the genre went into dormancy by the time the late 1960s arrived, it managed to sporadically attract audiences with titles like Grease before staging a full-fledged comeback with Chicago in 2002. Since then, the musical has been back, but usually, as a Christmastime treat for maximum award season visibility. Aside from live-action remakes of animated Disney movies, it's rare to see musicals outside of December.

An annual treat could become something more dominant in a post-COVID-19 landscape, partially because of how studios seem to be committed to musicals. The massive box office success of original musicals La La Land and The Greatest Showman has gotten studios eager to replicate that success. In the Heights, Everybody's Talking About Jamie, Cyrano, Dear Evan Hansen, and West Side Story are all set for 2021 releases. Beyond those titles, Little Shop of Horrors, Sunset Boulevard, Spamalot, and Wicked are all in development. Some of these are being adapted because Hollywood loves familiar names and those are all apparent in the cases of Wicked and West Side Story.

Inadvertently, though, these musicals could be perfect for a post-pandemic climate. For starters, musicals are movies that, when done right, can make lift your body up with energy and joy. How can you not wanna tap your toes to Life's a Happy Song? How can the lyrics in any song written by Howard Ashman not make you smile? Musicals can convey as many tones as there are stars in the skies but Hollywood loves upbeat musicals. Those are the kind of movies that could be the perfect antidote to the pandemic blues. I know I've turned to revisiting the musical numbers from Velvet Goldmine and Hedwig and the Angry Inch plenty of times during quarantine. The chance of seeing new vibrant set pieces on the big screen that could make my soal sing would be enough to get me to buy a ticket.

Even better, though, is how the musical is a genre that can't be done alone. I mean, just the genre of the round song requires multiple people to be properly executed! Plus, so many musicals are about people uniting and working together. Doesn't a movie about people being friends and working together while singing jaunty tunes sound just divine right now after being cooped up in our homes for a year? The same can be said for the dazzling choreography in the best musicals. Which would you rather watch, people making the same "toilet paper is gone lol!" jokes in a pandemic-themed comedy or the next The Boys Are Back?

And then there's the simple point that the best musical movies are a joy to watch with a packed house. It's not the same glorious experience as watching these things as live theater, but God, watching people get enamored with musicals is a magical experience. People applauding after individual musical numbers. Moviegoers humming their favorite tunes as they leave the theater. Best of all though is that unspoken sensation as the movies going on. Everyone's united in being totally enraptured in watching what's going on on-screen. Just as the characters in a musical are united in a common goal, so too are the audience members united in a love for what they're seeing.

That level of wall-to-wall unity will be at the forefront of the minds of movie studio executives as they try to get theatrical moviegoing to return to some level of normalcy in the coming months. Clearly, one way they're trying to accomplish this is by greenlighting a whole lot of movies that explicitly involve the pandemic. I have no problem with thoughtful auteurs like Ava DuVernay or Richard Linklater making character pieces that evoke this health crisis. But Locked Down alone makes the idea of further genre entertainment lamely covering the COVID-19 pandemic sound like a disaster.

How about instead giving me and moviegoers' everywhere vibrant musicals that remind us of the joys of unity, belting out our deepest desires and plain o'l fun? That sounds like the perfect antidote to the last nightmarish year of dealing with this health crisis. The musicals have managed to be a respite from reality in the past, it's time for the genre to do that once again!