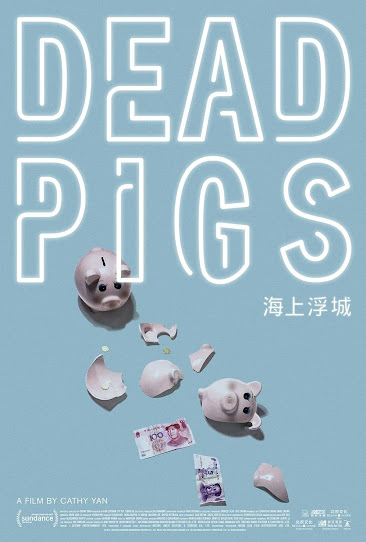 It's always strange when a director's first movie isn't the one that gets officially released to the public first. Due to all sorts of weird circumstances ranging from distribution problems to personal circumstances, sometimes directorial debuts have to wait a while before seeing the light of day. One of my favorite random examples of this is Lars Klevberg, whose directorial debut Polaroid was delayed for two years thanks to all those problems with The Weinstein Company. In the meantime, he directed the Child's Play remake, which ended up coming out first. So is the case with Cathy Yan's Dead Pigs, which debuted at Sundance 2018 but is only making its way to domestic moviegoers in 2021, a whole year after Yan's second movie, Birds of Prey.

While it's taken a while to get here, Dead Pigs turns out to have been well worth the wait. All that directorial vigor Yan demonstrated on Birds of Prey is alive and well here in Dead Pigs, which follows a slew of characters across Shanghai. The most notable of these figures are Old Wang (Haoyu Yang), a pig farmer in tremendous debt, and his sister Candy Wang (Vivian Wu). The latter is housed up in her grandparents' house and refuses to sell it to wealthy landowners who need her land to start construction on a big living complex. Also around is Wang Shen (Mason Lee), the son of Old Wang who is looking to make money however he can, including faking injuries from "severe" automobile accidents.

Yan's screenplay for Dead Pigs juggles several storylines in a fashion that echoes early Paul Thomas Anderson works like Magnolia. Uniting everyone is the presence of money, everyone in this movie, except for Candy Wang, is driven by a desire for money. This is especially true of real estate developer turned model Sean Landry (David Rhysdahl), who becomes wealthy simply by standing around and spouting generic phrases. The intimate cost of all that money or bulldozing old homes doesn't cross the minds of many of these characters, they just need cash. Dead Pigs depicts an all-too-familiar world where money means everything and yet nothing at all.

It's a fascinatingly-rendered concept made all the more engaging by how Yan isn't afraid to take her plot to great extremes. This includes a finale involving Candy Wang staring down a big bulldozer that imagines what would have happened if Carl Fredrickson had stuck around and fought off the real estate developers lusting after his house. Much like I, Tonya or Showgirls, Dead Pigs realizes the only way to authentically reflect the most absurd parts of humanity is with similarly outlandish storytelling. The characters of Dead Pigs act in over-the-top ways but it always resonates as something evoking tangible reality.

This type of storytelling also allows Yan to imbue the characters of Dead Pigs with enjoyably pronounced personalities. I especially adored Candy Wang who gets a variety of interests in Yan's script beyond just wanting to preserve her family's house. She likes painting, she does aerobics, she laughs at old Cary Grant movies, even when she's engaged in a form of prolonged protest, Wang leads a rich life. This makes her such a great counter to the rest of the film's money-fixated characters. Whereas Sean Landry has no real-life beyond his duties to a real estate company, Wang is representative of what happens when you live for something beyond monetary gain.

These characters flourish in the same kind of propulsive wit Yan would go on to lend to Birds of Prey. Even in her directorial debut, Yan already shows a remarkable level of polish behind the camera. Whether it's juggling so many different storylines with ease or her distinct sense of staging & blocking, Yan's directorial debut shows a filmmaker already in command of her craft. Her creative audacity even extends to closing the film out with the whole cast engaging in a sing-a-long, a routine that evokes a similarly bravura musical scene from Richard Kelly's Southland Tales. It's a shame Dead Pigs has taken so long to get a proper release because the film itself is an impressively-crafted ode to how ridiculous a life defined solely by money truly is.

Posted by Douglas Laman (NerdInTheBasement) at 10:34 AM