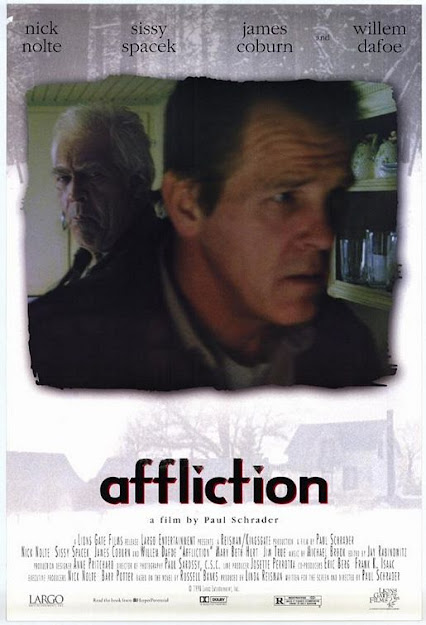 My experience with the Paul Schrader movie Affliction was a classic case of going into a film expecting one thing and experiencing something else entirely. The plot description for Affliction on the Amazon Prime streaming service frames the production as more of a mystery thriller, a yarn about a small-time cop who begins to investigate a murder in his small town. That's a piece of the puzzle for sure, but what actually occurs here is much more in the mold of a traditional Paul Schrader movie. That made this an unexpected feature, but one that nonetheless ended up winning me over. Even if it's not what I signed up for, Affliction is an appropriately haunting look at the cyclical nature of abuse.

Wade Whitehouse (Nick Nolte) is a police officer in a small town in New Hampshire. We meet him while he's trying to spend Halloween night with his daughter, an excursion that's undercut by Whitehouse's controlling tendencies. He doesn't listen to what his kid wants, he's only motivated by his own desires. Afterward, Whitehouse is stewing over the thought of not being a presence in his daughter's life when he's informed about a hunting accident that's left a man dead. Jack Hewitt (Jim True-Frost) was the only witness to the accident and Whitehouse becomes gradually convinced that Hewitt killed the man as part of a larger conspiracy involving the mob.

At the same time, Whitehouse is dealing with all sorts of personal turmoil, including the death of his mom, the prospect of marrying longtime sweetheart Margie Fogg (Sissy Spacek), and having to live with his abusive alcoholic father, Glen Whitehouse (James Coburn). With all these troubles piling up, Whitehouse sees solving this murder as the only way out of his current despair and a chance to prove to the world that he's something special.

As Affliction goes on and the psychology of Wade Whitehouse becomes more apparent, the film emerges as another Paul Schrader meditation on men who perceive themselves as God-like figures who are the only hope for a world gone awry. In the mold of his screenplay for Taxi Driver and his 2018 feature First Reformed, Schrader once again explores this theme with Affliction, though this time he's added the element of fatherhood into the mix. Specifically, the exploration of how Wade Whitehouse's upbringing at the hand of Glen Whitehouse and his own troubling behavior as a father has impacted his psyche. Whereas Travis Bickle in Taxi Driver was largely a loner whose relatives were offscreen, Wade Whitehouse is no isolationist, he's somebody deeply entrenched into other people's lives.

This adds a unique unnerving layer to his escalatingly irrational behavior because we know that these actions won't happen in a vaccum. They'll impact his daughter, his girlfriend, and even the citizens he's supposed to protect as a police officer. By leaning on this detail to inform the tension in Affliction, Schrader makes this a unique entry in his exploration of men suffering from delusions of grandeur. Furthering the uniqueness is how the movie commits to emphasizing that conspiracies Wade and even his father rebel against don't really exist. Whereas First Reformed wrung drama out of showing a man incorrectly responding to understandably horrific real-world atrocities, all of this behavior in Affliction is just shaking a fist at a problem that isn't there.

We eventually learn in Affliction that there was no mob conspiracy, no grander plot that Wade Whitehouse had to foil. The man just died from a hunting accident. Meanwhile, Glen Whitehouse drunkenly rants against women having more autonomy over their lives as if it's a larger plot to upend society. Both of these men have created problems in their head while avoiding the actual issues glaring at them straight in the eye. Schrader laces these conflicts with enough specific detail to make them genuinely harrowing to watch, especially his depictions of Wade becoming more and more like the very father he hates so much.

Not every aspect of Affliction works as well as its exploration of its main character's grim psychology. Handheld camerawork used in flashbacks to differentiate the scenes visually from the rest of the movie is interestingly conceived. However, they rely so much on shaky-cam that the dramatic power of these fragments of an abusive childhood is undercut. There are also a handful of scenes with extended dialogue exchanges that feel a bit too meandering in a way that doesn't add anything to the overall movie. On the whole, though, Affliction is far often more engaging than it isn't, particularly since Schrader both thoroughly commits to the grim tone of the production and skillfully directs a stacked cast (Nolte and Coburn are in especially rare form here). It may not be the movie I expected to watch, but Affliction is still a noteworthy directorial effort from Paul Schrader.