It's the big things that weight The Little Things down 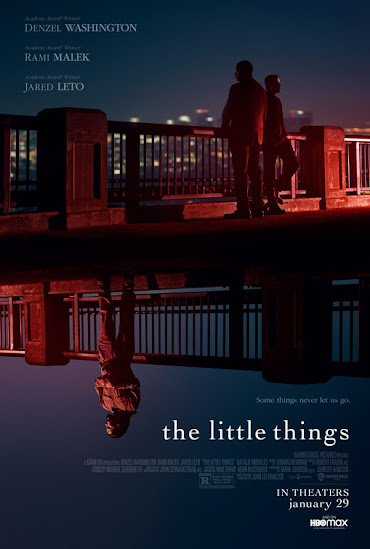 Back in 1995, Denzel Washington explored the neo-noir genre with The Devil in a Blue Dress. An underrated crime movie, the film saw Washington fitting into the standard noir protagonist archetype as cozily as an old winter coat. It also benefited from director Carl Franklin's assured filmmaking and an unforgettable supporting turn from Don Cheadle. A really good movie overall and certainly better than Washington's newest foray into the neo-noir domain, The Little Things. Rather than working with Franklin again, The Little Things see's Washington being directed by The Blind Side helmer John Lee Hancock. That kind of says it all, doesn't it?

Deputy sheriff Joe Deacon (Denzel Washington) has been working under the radar the last few years after his obsession with a serial killer left him a bad reputation in his old stomping grounds in Los Angeles. He returns to that city to investigate some evidence, leading him to run into detective Jim Baxter (Rami Malek). Just as Deacon returns to town, Baxter is looking into a serial killer whose behavior matches the killer Deacon got fixated on all those years ago. Both of them are determined to track this psycho down, so Deacon and Baxter team up. In the process, they become determined that a local resident named Albert Sparma (Jared Leto) is their guy. Could they be on the trail of a killer...or are they just falling into a pit of obsession?

At first, The Little Things only frustrates visually. Hancock can't seem to ever capture the simplest movement in a single frame, he's got to cut around four or five different shots to depict Denzel Washington getting into a car. It's like he's worried about losing the audiences attention even for a second so he keeps awkwardly shifting over to new shots. If Hancock wanted to keep the viewer engaged, though, he should have come up with a way better script. The Little Things is a generic neo-noir, the cinematic equivalent to an off-brand version of  your favorite meal. It looks like something you'd previously enjoyed, but all the flavor is gone.

The biggest problem is the films morose tone. The best noirs, neo or classical, can deliver a grim tone that's captivating rather than oppressive. However, those films tend to justify their tones with either evocative filmmaking or weighty themes. The Little Things has neither. Hancock's script features a lot of dimly-lit scenes and characters talking in vague whispers about the cruelty of man. However, it never lays down anything specific that can justify why the movie is so glum. Meanwhile, Hancock's dialogue is so mechanical and devoid of personality. Characters engage in surface-level phrases like they're learning to engage in conversation for the first time. It's all so artificial and not in a way that feels intentional.

That level of vagueness sinks the whole movie, especially when it tries to get into the mind of Deacon. A scene in his hotel room where it's made apparent that he's haunted by all the girls he didn't save is incredibly derivative. It only gets worse once Washington has to spit out a line that makes the underlying intent of the sequence laughably obvious. Then there's Leto's Sparma, whose performance kept reminding me of Allesandro Nivola in Face/Off for some reason. He's played in such an over-the-top unnerving fashion that it's clear he can't be all that he's cracked up to be. Sparma embodies how The Little Things has a tone that's aiming for Se7en while featuring characters so broadly-defined they might as well be on Teletubbies.

With these kind of characters and storytelling, The Little Things has no ambiguity and it has no suspense, two elements that are critical for any good neo-noir. The film is further weighed down by the pointless decision to set this film in 1990. Aside from a murder victim having a No Doubt flier on their fridge, nothing in here screams "1990 period piece". The 1990 setting is just one of many baffling decisions here alongside a laughably obvious "twist" ending that's just make you want to watch the infinitely superior Memories of Murder. Even beyond that Bong Joon-ho masterpiece, there's plenty of superior neo-noir and crime thrillers to watch (like Devil in a Blue Dress!). Don't waste your time with The Little Things, you'll be as bored watching it as Denzel Washington is starring in it.

Posted by Douglas Laman (NerdInTheBasement) at 9:59 AM