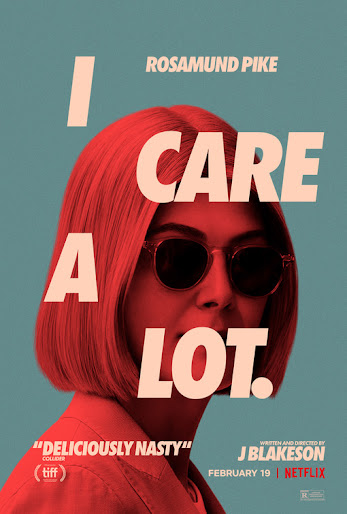 Marla Grayson (Rosamund Pike) makes it apparent through opening voice-over narration that she has a bleak view of the world. In her eyes, you're either predator or prey and Grayson certainly doesn't want to be prey. This informs why she makes a living creating sham conservatorships for elderly people. After collaborating with a doctor to make it seem like these people are ill-suited to take care of themselves, Grayson proceeds to lock these individuals up in nursing homes and then sell all their belongings. It's a scheme she's been using to make money for ages now...but her newest client, Jennifer Peterson (Dianne Wiest), could be a problem. Peterson may be locked up in a nursing home but she has friends on the outside who will do anything to stop her money from being exploited.

I Care a Lot has a whopper of a starting premise, one that couldn't have asked for a better pop culture landscape to be plopped into given all the buzz surrounding the recent Britney Spears documentary focused on corrupt conservatorships. Beyond functioning as an extension of the current go-to watercooler pop culture talking point, I Care a Lot's story also lays the groundwork for unflinching dark comedy. Writer/director J Blakeson pulls no punches in its tone, there is no good person protagonist to offer as a counter to all the seediness. This is a movie drenched in selfishness right down to how it embraces depicting Grayson as a ruthless monster.

It's a nice touch, too, that Blakeson refuses to dive into any kind of backstory for Marla. There is no tragic origin story to explain why she is the way she is. Marla is simply looking out for herself and wants money, like so many actual people in the world. Such a character is a perfect fit for Rosamund Pike, a master in the art of self-aggrandizing monologues about her character's own wickedness. Pike is terrific at capturing Marla as someone who's become an expert in deviousness, she's utterly compelling to watch. Ditto for Peter Dinklage, who eventually emerges as Roman, her adversary. Though playing different personalities, both Pike and Dinklage prove transfixing even when they're doing things as simple as vaping or slurping a smoothie.

If only I Care a Lot had taken a cue from its lead performers and kept things restrained. Unfortunately, the midway point of the movie sees the proceedings turning from a dark comedy into a more generic cat-and-mouse gangster film. This wouldn't quite be a problem except Blakeson struggles far more with this gangster drama material compared to just wallowing in the depravity of Marla's actions. For example, Roman and his gangsters vary in their effectiveness as killers to a distracting degree. It's hard to generate dramatic tension with foes who aren't much of a menace and protagonists who can survive near-death experiences with barely a scratch.

The feud between Marla and Roman also proves a problem in how it mostly ignores the whole corrupt conservatorship angle the rest of the movie was built on. Jennifer Peterson and the other elderly victims have vanished. Now we're stuck with a way less interesting movie that also wants us to root for Marla to win. That doesn't happen. On top of all that, incorporating a mob hailing from a foreign country (Romania) undercuts the sociopolitical subtext of Marla's actions being a microcosm for how American wealth comes at the expense of other people. That message gets muddled when so much wickedness is laid at the feet of baddies from a foreign land.

This concept is reinforced through an ending that tries its best to emulate the conclusions of both The King of Comedy and Uncut Gems but overexplains itself too much to even come close to those two movies. It's a shame I Care a Lot ends up petering out in an unsatisfying fashion because its performances and early commitment to omnipresent cruelty are admirable. Unfortunately, the production isn't confident enough to follow its creative convictions all the way. Innovation gives way to a derivative crime thriller. At least Rosamund Pike got to deliver her best lead performance since Gone Girl, what an extraordinary talent she is!