Klute is a dynamite thriller with depth to spare 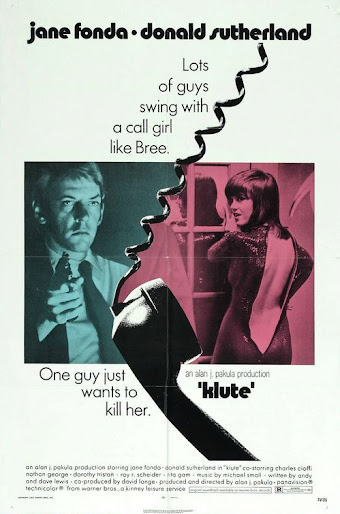 The arch of progress doesn't just point to constant upward trends. Unfortunately, society tends to take as many steps backward as it does step forwards when it comes to helping marginalized communities. The American film industry is no exception. While many steps have been taken for increased positive on-screen representation of certain oppressed groups in the last fifty years, watching the 1971 movie Klute reminded me how far we've fallen back in some respects. I can't even fathom a modern-day movie from Warner Bros. releasing a movie starring a sex worker, let alone one that depicts the sex worker as a fully-fleshed-out human being.  That wouldn't fit in with WB's modern approach of making movies "for the fans" or modern Hollywood's desire to erase the existence of sex entirely.

What a shame that we've fallen so far in this respect in 50 years. Oh well, at least we'll always have Klute, which follows Bree Daniels (Jane Fonda), who works as a sex worker in New York City. She becomes embroiled in an investigation into the disappearance of Tom Gruneman conducted by detective John Klute (Donald Sutherland). Turns out Daniels had repeated contact with Gruneman and could help provide clues as to what happened him. Both Daniels and Klute come from opposite sides of the tracks, with Daniels being free-spirited and Klute being all stuffed-up and proper. However, they'll have to work together to solve the mystery of Gruneman''s disappearance.

This mystery is a critical part of Klute but it's not the central focus of the entire movie. Actually, the crux of the production is exploring the character of Bree Daniels, whois at a personal crossroads in her life. Her personal turmoil is rendered explicit in a series of scenes showing Daniels at her psychiatrist where she details all the thoughts and desires. The script by Andy and Dave Lewis affords the character of Daniels plenty of screentime to be defined as a person beyond her occupation as a sex worker while her multi-dimensional quality defies the traditional Hollywood portrayal of a sex worker. Conceptually, it's already a subversive character, and luckily, the two writers give such a rich character thoughtful quandaries and dialogue to tackle.

I especially love the way she frames her internal conflict over developing feelings for Klute. Her dialogue perfectly captures a woman whose head is in a constant state of tug-of-war over what she wants. Those kinds of complex details are superbly handled by Jane Fonda, whose performance truly is remarkable. She can juggle every aspect of this character with such finesse, whether it's being a comforting presence to her clients, a vulnerable soul in her therapy sessions, or in her wry comedic rapport with Klute. Klute gives Fonda mountains of varied experiences to convey but she surmounts them all with such ease.

Fonda plays much of the movie off Donald Sutherland, an actor who has made a career out of playing composed figures representing upper-class authority in everything from Ordinary People to The Hunger Games. It's an archetype he once again inhabits successfully here, but this is no mere rehash of other Sutherland turns. Not only does Sutherland bring unique ingredients to his work as John Klute but Klute also has the unique ingredient of handing him Jane Fonda as a screen partner. Their earliest scenes together almost have a What's Up, Doc? quality to them in how this buzzy woman amusingly bounces off a stiff guy seemingly rooted to the floorboards.

These two exceptional lead turns are executed under the direction of Alan J. Pakula, who just cranked out masterpieces of tension throughout the 1970s. His gift for suspense makes Klute a movie that always keeps you guessing but he never loses sight of the characters in the middle of all the uncertainty. Just look at how the climax hinges on an extended conversation between Olsen and the surprise villain of Klute rather than just a barrage of contrived twists. Pakula is in rare form here as are so many of the creative participants of Klute. Please Hollywood, make more modern movies like Klute, both in terms of how it handles sex workers and its overall quality!

Posted by Douglas Laman (NerdInTheBasement) at 11:44 AM