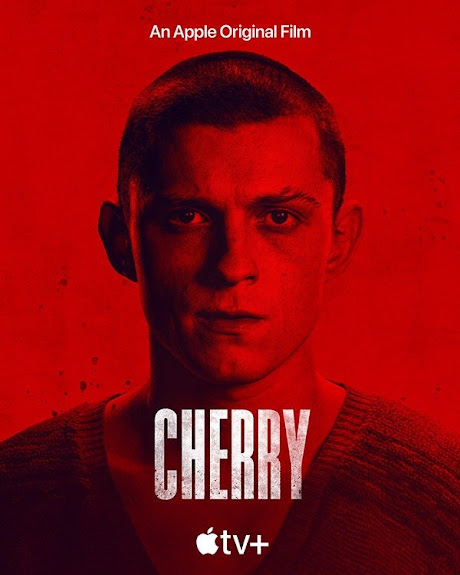 What do you do after you direct the highest-grossing movie of all-time? If you're James Cameron, you go off and plan a quartet of Avatar sequels. If you're Avengers: Endgame helmers Anthony and Joe Russo, you go small. Real small. After directing a pair of movies with a combined budget of over $700 million, The Russo Brothers have taken to directing Cherry, an independently-financed movie that cost $10 million. It's also an adult movie dealing with the Iraq War, drug addiction, young romance, and all sorts of other heady topics. Clearly, this directorial duo wants to demonstrate that they can direct things that aren't just Disney blockbusters. The ambition is admirable but their execution leaves much to be desired.

Based on an autobiographical novel of the same name by Nico Walker, Cherry chronicles the experiences of a guy named Cherry. While in college in 2002, Cherry falls in love with Emily (Ciara Bravo). It's a relationship that brings them both so much joy, but the prospect of Emily leaving to go to art school in Canada leads a dejected  Cherry to enlist in the U.S. Army. While there, Cherry experiences so much brutality that he can't even function properly when he returns to general society. Haunted by PTSD, Cherry turns to OxyContin to help calm his nerves, which leads him down the path of addiction. To pay for his drugs, Cherry begins a series of bank robberies, fully cementing his turn from a doe-eyed college student to a criminal.

The first film Cherry reminds me of is the Trey Edward Schults movie Waves in that both are indie movies trying to tackle as many hot-button sociopolitical issues as possible. Also like Waves, Cherry's reach extends its grasp. Despite running for over 140 minutes, Angela Russo-Otstot and Jessica Goldberg's script for Cherry never offers much in the way of substantive perspectives on issues like the Iraq War or the ongoing Opioid epidemic. This is despite Cherry throwing all kinds of wacky accentuations at the audience that range from on-screen text to Cherry talking directly to the camera to constantly shifting aspect ratios.

The best encapsulation of these showy but empty flourishes is seen in the name of the banks Cherry robs. These places are given punny titles like Capitalist One, Bank F**s America or Sh**y Bank. With these monikers, you'd think they'd be part of larger social commentary in the script directed at banking institutions. But there's nothing like that in here. Neither the story nor Cherry as a character has much to say about how banks impact people. Cherry initially turns to rob them out of a desperate need to pay back a drug dealer, not to make a statement on America's banking institutions. The bank names, then, just stick out as an anomaly, a weird attempt at sub-Mark Millar "edgy" social commentary that goes nowhere.

On and on Cherry goes, offering vague handwaves at offering commentary on the larger world but never voicing specific viewpoints or thoughts. Even elements like Cherry periodically talking to the viewer end up having no pay-off, it's just another showy but hollow detail. The films setting of Ohio ends up being also generically defined, a peculiar result given that the two directors and one of the writers grew up there. Aside from Subway being a go-to place for celebrations, though, there's nothing unique about Cherry's central locale. This story could take place anywhere. It's another aspect of Cherry that has no distinctiveness to speak of.

Unfortunately, the characters of Cherry are just as generic as the state they inhabit. This is especially true of the romance between Cherry and Emily, which is supposed to be the crux of the movie. Unfortunately, Cherry never makes time to give us those small intimate scenes that could sell these two as a believable couple worth investing in. Instead, they're rife with conflict from the get-go there's never a breathing moment where they can just exist and be in love. In adapting so much of its source material (the movie spans over two decades), small moments of humanity have gotten lost in the process. As a result, it's hard to find anything tangibly human to latch onto in this expansive saga.

At least the acting is uniformly good, even if the performers struggle to work with such thinly-defined characters. Tom Holland's already proven his dramatic chops in titles like The Impossible, so he has no trouble bringing way more depth to Cherry than what's written on the page. While the filmmaking tends to lean in too much on the supposedly "shocking" sight of seeing Spider-Man do heroin or pleasure himself, Holland just approaches the character as a complex human being. Though Ciara Bravo is stuck with a thinly-sketched love interest character and doesn't have much chemistry with Holland, she still throws herself admirably into such a bleak role.

As for the directors these actors are working under, Joe and Anthony Russo, in the context of Cherry, show off more interesting ideas than actually impressive filmmaking. shifting around the aspect ratios and filming styles to differentiate parts of Cherry's life (the film is split across six timeframes) is a nifty notion. However, they don't end up lending enough visual variety to each individual segment while an overreliance on dim lighting to suggest a bleak tone just suggests that somebody forgot to buy enough lightbulbs. Cherry has its moments, but they aren't enough to make up for a movie that doesn't offer much despite throwing so many things at the wall.