A crime thriller gets successfully crossed with a lowkey vibe in Ghost Dog: The Way of the Samurai 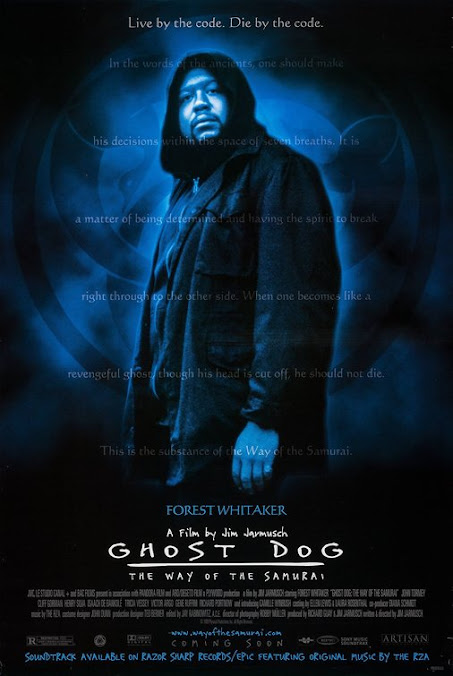 Something that tends to crop up in my favorite directors (Richard Linklater, Barry Jenkins, Greta Gerwig, etc.) is an ability to make every character on-screen feel lived-in. These filmmakers lend a sense of rich depth to each and every person that walks into the frame. It doesn't matter if they have zero lines, everybody in a movie has a story, they don't just exist to support the protagonist. This quality lends a sense of authenticity to the proceedings in addition to extra layers of entertainment. This same quality is around in abundance in Ghost Dog: The Way of the Samurai, which crosses writer/director Jim Jarmusch's laidback observational filmmaking with a crackling gangster thriller.

Who is Ghost Dog? While his name may make him sound like a Hanna-Barbera character, Ghost Dog is actually the alias of a man portrayed by Forest Whitaker. He's a hired killer who lives his days in New York City tending to his rooftop pigeons and learning the ways of the samurai. That's Ghost Dog's real passion, he lives and breathes every word of the spiritual guide Hagakure. His life gets complicated, though, after one of his targets turns out to be a relative to a local mobster, who wants Ghost Dog dead. Of course, Ghost Dog isn't going down without a fight and he proceeds to fight back against the men who are trying to kill him.

Throughout Ghost Dog: The Way of the Samurai, there's an amusing visual motif where all the big-shot gangsters are shown watching classic cartoons (and also a pair of Itchy & Scratchy shorts) whenever they're watching television. It's an already amusing sight gag to see the juxtaposition between characters who walked right out of Goodfellas chuckling at Woody Woodpecker. But the content in each of these cartoons depicts a confident antagonist being outmaneuvered by their adversary. These cartoons are a microcosm of the central story in Ghost Dog: The Way of the Samurai. Ghost Dog is the Road Runner and mobsters like Ray Vargo (Harry Silva) are Wile E. Coyote.

Watching that kind of dynamic proves interesting throughout, especially since Jarmusch frames all of the violence in a blunt manner that largely eschews making this stuff look "cool" (the way Ghost Dog twirls his guns around before holstering them being the one welcome exception). There's a frankness to how, for example, Vargo shoots and kills a cop. Blood doesn't go spraying across the walls, quippy one-liners are nonexistent. Not only does this reinforce the gravity of the situation Ghost Dog is trapped in but it also lends practicality rather than bombast to Ghost Dog's vengeful rampage. This practicality aligns with the thoughtfulness of the Hagakure text that guides his every action.

Ghost Dog: The Way of the Samurai isn't all violence, though. On the contrary, the lion's share of the movie's attention goes to lowkey dialogue exchanges. Here is where Jarmusch's affection for onscreen characters becomes apparent as he takes the time to slow things down and allow Ghost Dog to interact with people like French ice cream dealer Raymond (Isaach de Bankolé). Ghost Dog and Raymond's conversations are especially fun as Jarmusch shows the two (who are separated by a language barrier)  inadvertently echoing one another far more often than they realize. It's a lovely touch that makes their friendship so believable and unique.

Anchoring both the gangster and casual comedy parts of Ghost Dog: The Way of the Samurai is Forest Whitaker's lead performance. Whitaker's always been an actor you could count on to imbue gravitas into a role, even in something as featherweight as Vantage Point. For Ghost Dog, he's in rare and versatile form. He gets to showcase a quietly daunting physical presence in the shootout sequences while conveying a believable sense of experience in his recurring voiceover work reading aloud passages from the Hagakure throughout the film. There's such dimensionality in Whitaker's performance and it's great that Jarmusch takes the time to explore those layers of his character and the rest of the cast of Ghost Dog: The Way of the Samurai.

Posted by Douglas Laman (NerdInTheBasement) at 10:52 AM