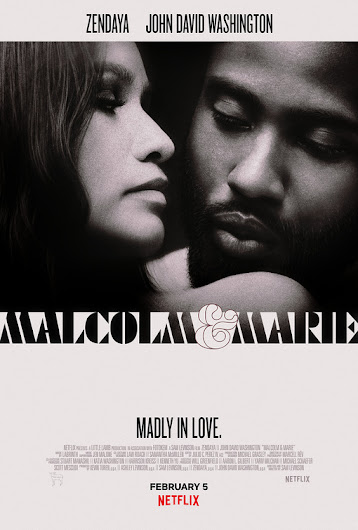 It's been one heck of a night for filmmaker Malcolm (John David Washington). He just came back from the premiere of his newest movie, which just killed, people loved it. As he rambles on about his accomplishments, his girlfriend, Marie (Zendaya), stands silently in the corner. These are our two lead characters for Malcolm & Marie and the tension in their relationship is already evident in how Marie is largely unresponsive to Malcolm's extended monologue. Malcolm is in his own world. Not even Marie can pierce his singular focus. But the duo will be forced to confront both their problems with each other and their own individual issues as a series of volatile arguments ensue. Tonight may have started in triumph but it's about to end with Malcolm and Marie holding nothing back in spewing bile at each other.

Malcolm & Marie belongs to a tradition of movies that can work incredibly well when executed properly. Said tradition concerns films that are limited to just one locale and the sight of people talking. Classics like 12 Angry Men or the works of John Cassavetes spun gold out of limited resources. Just recently, one of the highlights of Sundance 2021 was Mass, a movie that kept its gaze zeroed in on four people in a church basement. Done right, this is a stripped-down kind of film that can serve as a showcase for talented acting as well as writing that impresses with its restraint.

It's admirable for writer/director Sam Levinson to attempt this kind of movie, particularly given how different it is from his breakthrough directorial effort Assassination Nation. Whereas that film was like one giant Molotov cocktail hurling through a window, Malcolm & Marie is quieter in its brutality as it aims to be more akin to a thousand jabs to the heart. Levinson has also eschewed the bright colors of that film and his HBO show Euphoria for an entirely monochromatic color scheme, another commendable deviation from his comfort zone. Unfortunately, Levinson stretching himself hasn't resulted in something particularly engaging. Malcolm & Marie is more of a concept for a movie than a fully-realized movie.

The biggest issue is a simple one; the characters. Neither Malcolm nor Marie are all that interesting to be around for 106 minutes. If a movie is going to limit itself to just dialogue exchanges between two characters, then the character work needs to be sharp as a tack. Levinson stumbles here mightily. Malcolm especially is a poorly-realized creation. His cruel behavior towards Marie and ranting nature are clearly meant to make him an antagonistic figure, yet Levinson is too in love with listening to him prattle on for hours to investigate the character in a meaningful way. What could have been an intriguingly formidable human being is instead a bunch of rants from a Facebook comment section strewn together.

As for Marie, she's a person with such a vaguely-defined personality that Zendaya has nothing to latch onto. She and Washington are marooned in a sea of generic dialogue exchanges and even these talented performers can make lemonade out of this lemon of a screenplay. Worse yet, extended monologues where each character talks about their tragic backstories don't convey their intended effect of either chilling the viewer to the bone or lending insight into what makes these people tick. On the contrary, Levinson's penchant for going for the most extremely dark backstories possible just made me think Malcolm was eventually going to say "every morning I break my legs, every night I break my arms."

Even more frustrating is that Levinson doesn't even fully commit to keeping his characters in a confined space. Multiple times throughout Malcolm & Marie, one of the two titular characters will just go outside and walk around in a vast open space to kickstart some contrived drama. Explicitly showing Malcolm and Marie outside of their home immediately deflates the tension of the movie. Classics like Rope or 12 Angry Men worked because they were confident enough to use constant confinement as a source of extra tension. As any parents of kids who are stuck in a long car ride can attest, people stuck cramped together for a long time will eventually begin to fight. Malcolm & Marie, on the other hand, undercuts the intensity of its arguments through its brief digressions to the outside world.

It's a flaw emblematic of how Malcolm & Marie struggles to commit enough to its lofty ambitions to create a cohesive motion picture. There have been many great movies restricted to just a small cast and some conversations. Malcolm & Marie is not one of them.