All hail the well-crafted horror filmmaking in Saint Maud 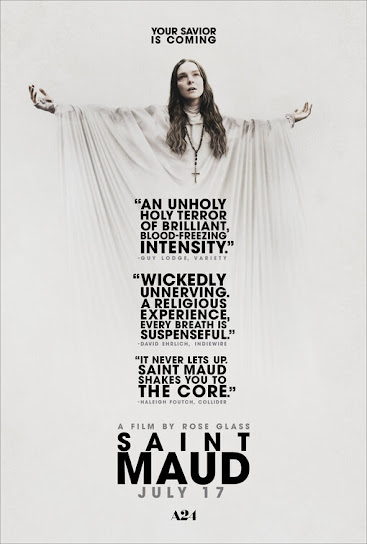 When I've been wistfully reminscing about theatrical experiences since the COVID-19 pandemic began, I've usually been recalling experiences where the audience was united in enjoyment over what was happening on-screen. However, equally memorable in a theatrical space are those instances where audiences were baffled by what was going on on-screen. The VVitch, for instance, people were leaving that one so confused. I may not agree with those responses but it's always thrilling to see movies get any kind of profound response out of people. I bet Saint Maud (which is currently streaming on Epix for some reason) would have gotten those kind of pronounced reactions, drawing out equal measures of "Wow!" and "What?!?"

A former nurse named Maud (Morfyyd Clark) is now working as a caretaker after a traumatizing experience where she failed to save a patient. It isn't just her occupations that have changed in the wake of that event. Maud has also become a dedicated Roman Catholic, she lives every day, every moment, every movement, wondering how she can better live up to the Lord. This includes her time spent caring for a dying woman named Amanda Kohl (Jennifer Ehle). Though the two seem to bond in their days together, Maud can't seem to get Amanda to convert to her faith. These theological struggles begin to send Maud off an edge that will see her embracing her faith to a startling degree.

It's a cliche at this point to say this about top-shelf horror movies, but there's no other way to put it; Saint Maud works extremely well at touching your nerves even when it's just exploring the mundane day-to-day life of Maud. In particular, the sound work does a remarkable job putting us inside the frantic mind of this protagonist. Every scrape of a glass across a table, every crunch, Maud is always on alert. The trauma she's experienced means she never lets her guard down and this takes every noise around her to the extreme. It's an incredible way of putting us inside her headspace without the viewer ever realizing it.

Similarly successful at evoking Maud's point-of-view is the camerawork. Early on, when Maud's getting along with Amanda just fine and her relationship with the Lord isn't tested, director Rose Glass and cinematographer Ben Fordesman frame the movie in a manner traditional for artsy horror fare. Lots of wide-shots, characters framed from afar, there's a sense of control to how they're capturing Maud's word. But when things get more and more out of control, the visuals begin to get more warped. Close-up's become more noticeable, the camera gets titled, Maud's world is now upside-down and Saint Maud finds creative ways of visually reflecting that.

Saint Maud is an impeccably put-together affair that scores what every horror movie should strive to achieve: memorable scares. I was just so on edge throughout this whole movie! The screenplay by Rose Glass effectively establishes Maud as someone who could just snap like a twig at any moment and Morfyyd Clark's ethereal performance conveys the same quality. She's like the human manifestation of Hitchock's adage of a bomb under a table; we all know she's going to explode, but when? This imbues a remarkable amount of tension into the whole movie, particularly one nail-biter of a sequence where an old friend by the name of Joy comes to her apartment. The tension's so thick here you could cut it with a knife!

With such a compelling lead character told through impressively-realized filmmaking, you really can't take your eyes off Saint Maud.  It's such a richly-detailed film, particularly in the challenging morality of its characters. Amanda, for example, will (appropriately) grate on your nerves one minute before conveying such a haunting sense of tragedy the next minute. That's another one of the many creative ways the film keeps you on your toes. Really, the only complaint I can lob at Saint Maud is that I wish I could have seen it in a theater, I would have loved to see a packed house of moviegoers respond to this movie. Especially that mic-drop of an ending, holy cow, what a perfect ending!

Posted by Douglas Laman (NerdInTheBasement) at 9:06 AM