Settle in with the quietly powerful ambiance of Nomadland 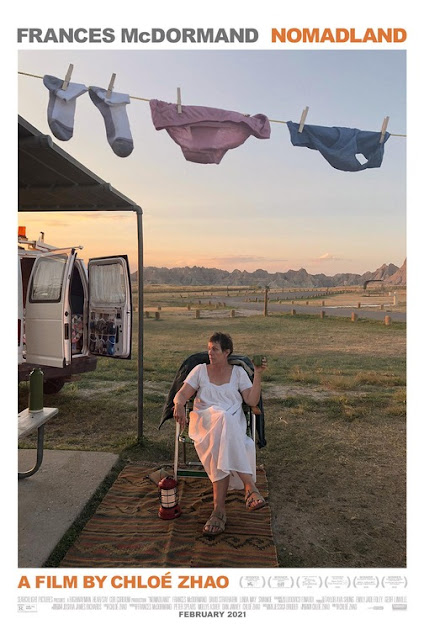 The 2008 global recession was a tidal wave and it left countless people drowned. In the wake of that event, where do you go? What can you do? It's not like you can just pick yourself up and keep moving. After all that financial hardship, can you just keep living like you always have?  American society tells us there's only one way to live. Maybe, in the aftermath of all that hardship, it's time for something different. So ponders the protagonist of Nomadland, Fern (Frances McDormand), whose journey across various parts of America makes the viewer contemplate what truly defines a fulfilled life. Is it just getting by financially...or is there something more out there?

Fern used to live in Empire, Nevada. But then the US Gypsum plant where she and her late husband worked closed down. With that place gone, the town collapsed. Now Fern has nowhere to live, let alone to work. From the start, writer/director Chloé Zhao shows a smart eye in depicting Fern's situation. We start the movie with that plant having already closed and her husband having already died. Zhao doesn't linger on Fern reacting to fresh tragedy, she begins her story with Fern deciding to take her life in a new direction. Already, Zhao is departing from the cinematic norms of depicting the impoverished in America. This is not "poverty porn". This is something far deeper.

That new direction Fern has decided to go in is to become a nomad, a person who lives out of their RV and travels from place to place. It's something born mainly out of necessity, as Fern's employment opportunities (like working in an Amazon shipping center or at an RV park) are across America rather than in one spot. But by doing this, Fern becomes acquainted with a whole new culture. It turns out there's a lot of people who have turned to becoming nomads in the wake of recent events in their lives. Whether it's familiar tragedies, financial hardships, or any number of other circumstances, the traditional way of life isn't satisfying anymore. It's time to hit the open road.

For the first time in her career as a feature-length filmmaker, writer/director Chloé Zhao gets to work with professional actors in Nomadland. However, there are only two such performers in the whole cast, McDormand and David Streaithern. Otherwise, she adheres to the docudrama approach of her first two movies, Songs My Father Taught Me and The Rider. Like those films, Nomadland features real-people playing characters that are their actual selves. Real-life nomads like Linda May, Swankie, and Bob Wells are the most prominent figures to appear in this manner. Also like with her initial two features, Zhao's affinity for this kind of casting works exceedingly well in imbuing authenticity into Nomadland.

This is especially apparent in a sequence where various nomads share testimonies about what drove them to this lifestyle around a campfire. One woman's recollection about how her dying husband told her not to waste another day of her life especially stuck in my mind as powerful, particularly her use of the term "sailboat in the driveway" to summarize a life wasted. This is the kind of emotionally raw moment that can be found throughout Nomadland. The quiet atmosphere of the entire piece means that Zhao makes time for the little moments that truly make these characters come alive as fully-dimensional. A low-key scene of Fern, Linda May, and Swankie goofing off in a high-tech RV is a perfect example of this. It's such an exceedingly charming moment that gets so much mileage out of the affable chemistry between the three actors.

Plus, these kinds of scenes show that Zhao has a sharp eye for what moments in life truly leave an impact on us as people. In the movie Up, Russell recalls how, when it comes to his memories with his dad, "the boring stuff is the stuff I remember the most". Nomadland is never boring but it's a movie made up of the moments that we could think of as boring when we're living them. These are also the moments that American society tells us we can't pause to reflect on lest we not make more money. Talking with friends over the campfire. Goofing off in an RV with friends. Talking about tattoos over a lunch break. Square-dancing in some old Southern eatery. Even just walking down the street on a particularly beautiful night. None of these moments involve a lot of money, but whether we realize it or not, they bring us closer to others and ourselves.

Zhao and cinematographer Joshua James Richards capture these moments with such warmth and beauty as if they're being recalled through the rose-colored tint of our memories. The way the locations of Nomadland would appear in our wistful recollection is how they look on-screen. These stunning visuals accentuate a melancholy tone that proves perfect for the kind of internal experienced Fern is navigating. Speaking of Nomadland's lead character, Fern's story becomes so emotionally engaging that her circumstances can make small-scale problems seem like the end of the world. The fact that Zhao got me to gasp over seeing Fern's items accidentally shattered or hearing her engine sputter, I love that, I love when I get so invested that the tiny things suddenly feel momentous.

Much of that is also due to Frances McDormand's lead performance, an incredible piece of work that cements once and for all how this actor could be engaging in any circumstance. Much of Nomadland hinges on just watching McDormand do simple things like walk across a camp of nomads or waiting for her laundry at the laundromat to be done. All the while, McDormand commands your attention thanks to her performance that delicately balances a quiet demeanor with signifiers of years of hardship. Just through a facial expression, McDormand always reminds us that Fern has been through a lot but she never solely defines her performance by that torment.

After all, people are more complicated than that. So is life. We don't have a lot of time to think about that in this world that's usually propelling us from one paycheck to the next. Nomadland offers viewers a chance to contemplate those sort of weighty matters, all through the prism of outstanding filmmaking courtesy of Chloé Zhao.