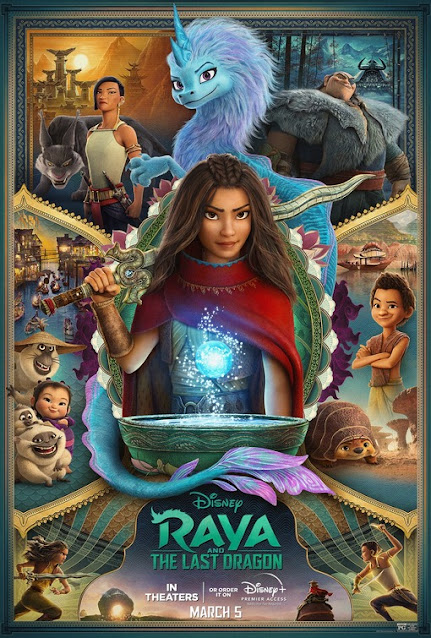 Walt Disney Animation Studios has always loved fantasy storytelling. Heck, it’s been ingrained into the studio's DNA since its first movie, Snow White and the Seven Dwarfs. But there’s a different strain of fantasy storytelling going on in Raya and the Last Dragon, one that owes more to Jeff Smith’s Bone than Frozen. Action-oriented fantasy isn’t something Disney Animation has a massive amount of experience in, but Raya and the Last Dragon makes for a fine foray into that domain. Lovers of traditional Disney fare need not despair, all the hallmarks of these films (cute animal sidekicks, celebrity-voiced comic relief, etc.) are still around in a pleasant enough fashion to excuse their familiarity.

Raya (Kelly Marie Tran) is the daughter of a chief in the land of Kumandra. This realm has been divided into five sections, with no one trusting each other as a massive plague ravaged the land and turns all it touches into stone. There is hope for this land, though. Raya believes that the very last dragon in existence, Sisu (Awkwafina) has the power to save Kumandra just as she did once long ago. To achieve this, Raya and Sisu will have to unite the disparate pieces of a magical orb while working with a ragtag group of misfits, including an adolescent chief and an intimidating warrior. They'll also have to face off against Namaari (Gemme Chan), with whom Raya has a personal grudge, as well as Raya’s difficulties with trusting anyone.

The weakest spots of Raya and the Last Dragon are the ones where it tends to play things traditional. The comedy, for instance, can end up being too broad, particularly distracting uses of modern-day slang (“Bling is my thing!”) in a period-era setting. There’s also the issue that the opening fifteen minutes are too heavy on expository dialogue, characters end up lecturing about the past rather than just being people. Luckily, much of Raya hews towards unique traits, such as the stark way the movie defines its heroes. There's a sense of darkness to how the film depicts its world ravaged by the past from the moment it first introduces Raya riding atop her beetle/bear steed Tuk Tuk across a desolate desert landscape. She looks like a John Ford protagonist as imagined by Avatar: The Last Airbender.

That aesthetic is unique enough to grab one's attention while the undercurrent of sobriety in the ensuing story maintains your attention. Rather than have a mystical prophecy set everyone up as easily believable saviors, Raya and her various companions are defined by their loss. They’re all navigating an unfamiliar world deprived of the ones they love. There’s underlying trauma to even the goofiest characters in Raya and the Last Dragon. Committing to treating that trauma seriously turns out to be one of the movie's best assets, it lends the whole thing some tangible gravity. The same can be said for how screenwriters Qui Nguyen and Adele Lim commit to making Raya messy in her trust issues. Raya can be an exhilarating fighter and kind soul but like any of us going through intense emotional experiences, Raya's also capable of not doing the right thing. There's a relatable sense of imperfection to this protagonist that's nicely-realized, particularly through Kelly Marie Tran's vocal performance.

All of that character-based material makes for a good grounding to the adventure aspects of Raya, which prove fittingly sweeping. Directors Don Hall and Carlos Lopez Estrada, the former of whom previously helmed the action-oriented Disney Animation film Big Hero 6, use Raya as a chance to embrace all kinds of stylized set pieces that could only be captured through the world of animation. Their action reminded me of a line from the producers of Kung Fu Panda, where they mentioned they didn't want their action scenes to leave anything for the big PG-13 blockbusters. Similarly, Raya's various chase scenes and big hand-to-hand fight scenes are exciting enough to fit into any good blockbuster, they're not just sanitized versions of what you'd find in older-skewing fare.

That action is captured through well-done fight choreography that has real weight to it (a difficult feat to pull off in fully-animated environments) while Hall and Estrada show an admirable affinity for memorably grandiose imagery. They also make use of slick camerawork that, at times, feels like it's channeling the rapid-fire editing and camerawork seen in a Guy Ritchie vehicle. Speaking of visuals, any of the scenes revolving around Sisu and her unique abilities as a dragon make use of some delightful animation This isn’t a “grounded” vision of a dragon, this is a dragon as envisioned by a ten-year-old. Plus, giving Sisu water-based abilities sets her immediately apart from the traditional fire-breathing dragons in pop culture, even if her name kept making me think of a defunct streaming service

It's not just Sisu that proves to be a visual treat here in Raya and the Last Dragon. There's no shortage of beautiful backgrounds here in Raya, with the various sets for the individual kingdoms especially conveying so much history. I desperately wish both of Disney's animation houses could find more varied animation schemes than juxtaposing cartoony characters with ultra-realistic backgrounds. Ditto for finding more inventive ways of designing computer-animated humans. Still, at least Raya is a pleasing version of those visual details. In its animation and other key ways, Raya and the Last Dragon is definitely a familiar Disney Animation yarn. However, it (mostly) packages up the familiar in enjoyable wrapping while also delivering its fair share of inventive touches, especially in its adventurous tone. Any movie that makes me want to go home and crack open my The Complete Bone book has got my approval!