An under-recognized legend gets rendered as a person in Be Natural: The Alice Guy-Blache Story 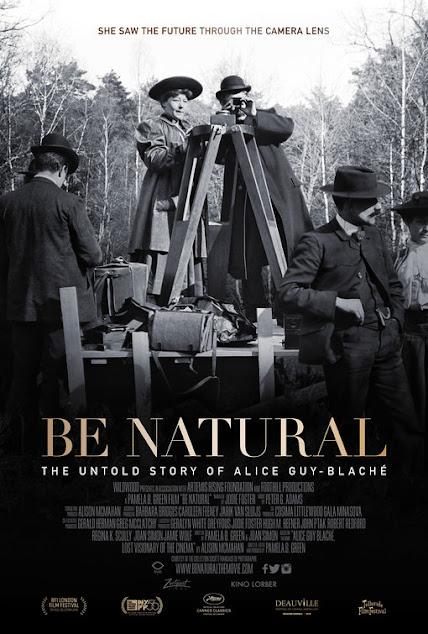 Sometimes, the circumstances of a movies release intertwine directly with its own themes. So it is with the documentary Be Natural: The Untold Story of Alice Guy-Blache. Directed by Pamela Green, this story of the first woman filmmaker and how she got erased from history scored strong reviews and had an easily-marketable starting premise. Alas, it has become relatively obscure. A call to champion an unsung cinematic hero has also become unsung itself. The fact that this didn’t get a wider release* and picked up by a bigger arthouse studio is a tragic reflection of how the forces that led to Alice Guy-Blache being erased from history are still alive and well today. Stories, experiences and art from women are considered as unimportant in 2021 as they were in 1921.

That's such a brutal thought and a stinging indictment of the general arthouse distribution scene, which immediately create a perception that something like Be Natural can never resonate in the mainstream simply by refusing to give it a shot at entering the mainstream. At least the documentary itself is good enough to warrant frustrations over the lack of conversation in the general film scene. Though Be Natural, filmmaker Pamela Green gives viewers a whole bunch of different kinds of movies. On the one hand, we get a traditional linear look-back at the life of Alice Guy-Blache and what led to her become such a trailblazing filmmaker.

But we also get to see modern-day segments dedicated to Green tracking down living relatives of Guy-Blache as well as technology to preserve interviews with Guy-Blache's ancestors. There are also numerous interview segments with famous filmmakers and actors as well as a recurring storyline about a cinematographer trying to filming footage with one of Guy-Blache's cameras. That's a whole lot of food being packed into one dish, but Be Natural mostly avoids feeling overstuffed by uniting the disparate segments through an infectious passion for its central subject.

Also helping to provide connective tissue is the idea that this structure is necessary to compensate for how much Alice Guy-Blache has been ignored. She hasn't been able to garner countless documentaries over the years about her life and work like so many other classic filmmakers. Thus, this one documentary is gonna correct that in one fell swoop. And like I said, it all works surprisingly well, giving us insight into Guy-Blache's creative process and the various forces that enragingly left her uncredited for her contributions to the art of cinema. When everything works together with this well, it's impossible to complain about a movie like Be Natural being crowded.

Also proving delightful is the wide array of interview subjects, which range from Julie Depy to Ava DuVernay to Andy Samberg (yes, that one). Through these talking heads, the viewer gets a greater appreciation not only for how widely-influential Guy-Blache's works are but also how widely-erased her works have been. When Peter Bogdanovich openly talks about how he'd never heard of Alice Guy-Blache before being interviewed for Be Natural, then you fully comprehended the gravity of Guy-Blache's erasure. It's a little puzzling why Peter Farrelly is here, though, did the director of Osmosis Jones really have valuable insight to lend on Alice Guy-Blache?

The interview segments of Be Natural expand the scope of Guy-Blache's contributions to cinema. But Green is smart in knowing just when to pull things back to a more intimate scope so that we never forget about the human being Guy-Blache was. This is especially in the poignant final five minutes, which include home video footage of Guy-Blache In the last few years of her life. Just as film opened up new doors of expression for Alice Guy-Blache in her directorial career, so too does the medium offer a glimpse into her perspective in her final days.  Films were always a defining element of Alice Guy-Blache’s life and the documentary Be Natural makes it apparent why the world is so much better for that.

* Kine Lorber distributed this domestically and they're a great arthosue studio in their own right, it's just a pity that Be Natural couldn't have been like recent documentaries like Three Identical Strangers and Won't You Be My Neighbor? and gotten distribution from a major arthouse studio.