Shirley as an Excellent Page-Turner of a Movie 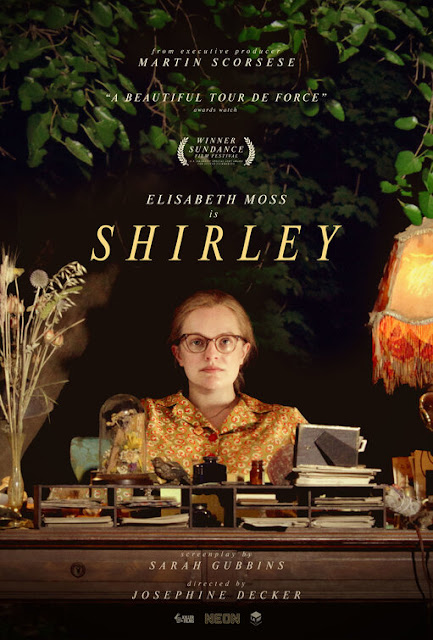 Speaking from experience, the process of being a writer is an utterly strange one. One would like to imagine it's easy as just sitting down at a laptop and typing away at keys that magically produce the next great American novel. Instead, it's all about patience, trial-and-error. You'll write yourself into many dead ends. Distractions creep in easily. You might spend just as much time worrying about if you're doing enough writing as you actually do the writing. The process of writing is ultimately rewarding but boy does it have its strange effects. If the new Josephine Decker movie Shirley is any indication, author Shirley Jackson, the writer behind The Haunting of Hill House among other works, could attest to that.


We do not begin Shirley with the titular lead character. Instead, we start with Rose Nemser (Odessa Young), a newly married woman who, alongside her husband, Fred (Logan Lerman), is moving onto a new life. Said life will entail the two of them staying at the residence of Shirley Jackson (Elisabeth Moss) and Stanley Edgar Hymen (Michael Stuhlbarg). As Rose enters this new town, Shirley establishes its intrusive style of filmmaking. The residents of this new location, even just a trio of kids playing in an alleyway, seem to loom over Rose. Decker's camerawork puts the viewer right into the point-of-view of Rose. In the process, both this town and Shirley's house are rendered as dauntingly overwhelmingly as they are in the eyes of Rose.

Once the two arrive at their new humble abode, they quickly fall into specific roles. Pregnant Rose is tasked with being the helper around the house and a companion for Shirley while Fred is off being a teaching assistant at the college Hymen lectures at. As she stays around the house, Rose quickly becomes aware of Shirley's erratic behavior and fragile psychological condition. Such parts of Shirley's personality become all the more apparent as Shirley attempts to write a new book based on a local college girl that went missing. Said girl soon becomes a stand-in for how both Shirley and Rose have lost themselves at the mercy of adhering to the ideals of what men in their life want.

This concept, as well as the interior lives of both Rose and Shirley, inform a chilling tone that's perfectly accentuated by the score by Tamar-kali. In contrast to typical film scores (think the works of Hans Zimmer or James Horner) that try to instill a sense of epic scale in their music, Shirley's score always has a sparse quality to it. Its participants, like large string instruments, always sound like they're performing in a room totally by themselves while individual tracks make heavy use of silence. Even instances of choir chants in the score carry this haunting lonely quality. This striking creative choice makes for great-sounding music as well as a perfect auditory reflection of how isolated the characters of Shirley and Rose are. The movie itself seems to recognize how good Tamar-kali's score is considering how it smartly eschews dialogue for numerous sequences to let the score take center-stage.

Almost as insightful as Tamar-kali's score is Shirley's numerous instances of truly wonderful stylized imagery. Get ready to question what's real, what's not, and whether the line blurring the two even means anything. The fractured psyche of Shirley's protagonists is rendered in a heightened manner that would make David Lynch proud. Haunting visions seen by Shirley in a bathtub dream sequence and an exterior shot of Shirley at her desk in the nighttime stand out as particularly exceptional examples of this aspect of Shirley's. Such unique & thoughtful imagery isn't just stunning to look at. It also instills a sense of thrilling unpredictability into Shirley. One never knows when the rug of reality will be pulled out from under the viewer.

Meanwhile, Shirley also presents visual reflections of the characters' internal turmoil in more everyday circumstances. For example, there's an extended shot of the camera lingering on a creaking wall as Hymen becomes increasingly frustrated with his significant other. Even better than that is an instance of Rose while working in the kitchen, just letting several eggs fall to the ground. It's an evocative shot, all those yolks just laying there on the floor. But this memorable image also tragically and quietly conveys how this is the only way Rose can get her frustrations expressed as a woman. To do otherwise would be to be "too loud", "too demanding", all those things "proper" women aren't supposed to be in traditional society.

Unlike traditional society, though, Shirley as a movie embraces complex and imperfect women and it's all the better for it in every respect, Huggins' script, for instance, is rife with great dialogue all around but I especially love the dialogue for Shirley Jackson. Huggins gives the character so many pieces of juicy acerbic dialogue that cut right to the bone. It's a great way of reflecting the insightful and cunning nature of a person so many local townspeople see as just a despondent hermit. Meanwhile, Shirley's ability to let its lead characters be multi-faceted people also proves a boon for the central performances. This is particularly true of Elisabeth Moss, who delivers her second great lead turn of 2020 following her impressive performance in The Invisible Man.

As seen by her work in projects like Her Smell, Moss has a gift for diving in head-first into messy fragmented people. She's the "runny mascara" actress who makes the pain of her characters seem unbearably real. That talent comes in mighty handy for the role of Shirley Jackson, which calls for Moss to portray someone whose supposed to keep everybody, including the viewer, on their toes. Does Jackson have no grasp on reality? Is she, perhaps, the only one with a true grasp on the real world? Moss keeps you always guessing to great effect while just her eyes can communicate so much about Jackson's interior life. Meanwhile, Odessa Young impresses as Rose, particularly in regards to how memorable she is despite the fact that she spends most of the movie holding her own directly against Moss. Rather than be a footnote against Moss' performance, Young, instead, plays excellently off of Moss. The two performances complement rather than overwhelm each other. I especially love the way Young depicts how her characters' interactions with Shirley Jackson help Rose to evolve throughout the runtime.

Speaking of noteworthy supporting turns, Michael Stuhlbarg as Stanley Edgar Hymen provides both plenty of humorous line readings ("Run with vigor!" and all of his other old-timey phrases are perfectly delivered) and quietly unnerving menace. Shirley may be the one that local townspeople murmur about as some kind of monster but Stuhlbarg's Hymen really sets your hair on edge. Stuhlbarg and the other cast members deliver exquisite work under the direction of Josephine Decker. Her mesmeric filmmaking skills prove to be as perfect of a fit for Shirley as they did for her 2018 immersive theater film Madeline's Madeleine. Whether it's the house belonging to Shirley and Stanley or visions Shirley has of the story she's writing, Decker always knows how to transport viewers directly into the overwhelmingly unnerving but endlessly captivating world of Shirley.
Posted by Douglas Laman (NerdInTheBasement) at 9:55 AM