The Past Becomes The Present In Da 5 Bloods 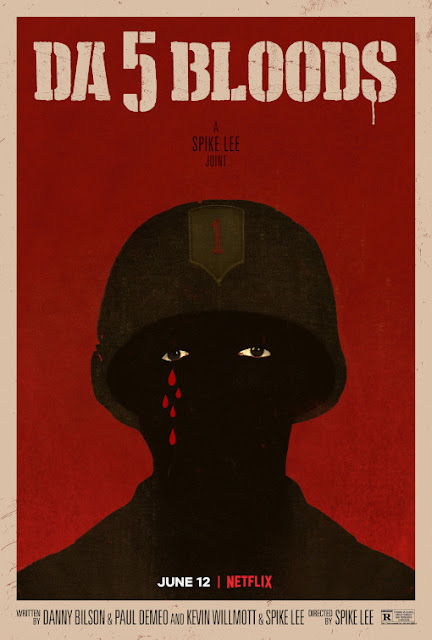 Da 5 Bloods makes it no secret where its creative inspirations lie. Any movie about men heading off to unearth gold and developing distrust with one another is bound to draw comparisons to The Treasure of Sierra Madre. Writer/director Spike Lee has been open on that influences as well as how Da 5 Bloods takes inspiration from another Vietnam film, Apocalypse Now. Meanwhile, I myself found Da 5 Bloods frequently evoking William Friedkin's Sorcerer. Da 5 Bloods has an obvious rich love for the cinema of the past. However, this is not one of those movies that lean on homages alone. Instead, past films are used as a springboard for something new, something exciting, and something boldly-realized.


The title of Da 5 Bloods refers to a group of Vietnam soldiers consisting of Paul (Delroy Lindo), Otis (Clarke Peters), Melvin (Isiah Whitlock Jr.), Eddie (Norm Lewis) and the now-deceased Norman Earl Holloway (Chadwich Boseman). The surviving four members have reunited in Vietnam in the present day in the hopes of recovering the body of Holloway, who died in combat. At the same time, they, alongside Paul's son David (Jonathan Majors), hope to reclaim a crate of gold that the 5 Bloods group buried in Vietnam years ago. This monumental task quickly gets complicated in every way possible. Among the most pressing of these issues are Paul's obvious psychological problems, a dangerous terrain surrounding the gold, and grudges between members of the group.

Spike Lee finds a myriad of creative ways for Da 5 Bloods to reflect its central theme of the past being inseparable from the present. Much of this comes from aspects of the script, such as the fact that the mistreatment of Black people throughout history motivates Holloway and his men to take the gold for themselves. America's past and present mistreatment of Black people provides an intriguing underlying motivation for so much of Da 5 Bloods' central gold-hunting mission. Another clever manifestation of this theme is the visual unity between scenes set in the past and scenes set in the present.

Da 5 Bloods has a number of flashbacks following the titular group in their exploits during the Vietnam war. Though filmed in a different aspect ratio than scenes set in 2019, Da 5 Bloods finds creative ways of providing visual unity between the past and the present. For one thing, Paul, Otis, Melvin, and Eddie are all depicted as their older selves rather than as young men. The war is impacting their individual worlds so profoundly in 2020 that even their memories feature their present-day selves. Meanwhile, editor Adam Gough creates some inspired transitions between modern-day scenes and flashbacks. These editing techniques reflect how connected these disparate time periods are. The Vietnam War may have technically ended in 1975.

Yet, through its visuals, Da 5 Bloods vividly conveys how the war never really ended for the soldiers that fought in it. Nowhere is that idea more apparent than in the character of Paul. Though everyone in the titular group left the war-scarred, Paul was especially traumatized by what happened to him in the Vietnam War. In the present-day world, Paul is an easily irritated Trump supporter with a toxic relationship with his son. His entire life, whether it's in his political beliefs or in his psychological state, is trapped in yesteryear. That, plus his obsession with the gold he and his fellow soldiers left behind, is making it impossible for him to have a future.

The character of Paul is an absolutely incredible creation. Much of that comes down to how writers Lee, Danny Bilson, Paul De Meo, and Kevin Willmott do not hold back in any regard with this character. When a new aspect of Pauls's personality emerges, the screenplay totally commits to it. From his first scene, where Paul's political beliefs are made apparent as he wears a Blue Lives Matter Punisher Skull T-shirt to later sequences where he makes his distrust for any person who crosses his path as clear as day. Paul keeps so much close to the surface yet he still bottles up so much. He's a classic example of a character who'd rather pushed everybody away rather than getting close to one person.

Paul is an incredibly absorbing figure and one made all the more engrossing by a powerhouse performance from Delroy Lindo. Lindo's depiction of the abrasive yet quietly tragic Paul conjures up a lot of descriptors. Sometimes, it's a chilling performance. Sometimes it's a heartbreaking one. Sometimes it's an amusing performance. The array of different emotions Paul can elicit is a testament to both the characters' erratic behavior and the power of Lindo's performance. Whatever Da 5 Bloods calls Lindo to do, he's there to render it with such authenticity. Lindo is so good that Da 5 Bloods can just leave a scene in the third act entirely to Lindo monologuing to the camera. Less is more, as they say, and when you got a performance as good as Lindo's, it's hard to imagine what else you need.

Lindo is accompanied by a sterling supporting cast, including Jonathan Majors following up his outstanding work in last year's The Last Black Man in San Francisco with another terrific performance. As for other noteworthy aspects of Da 5 Bloods, Spike Lee's direction is truly impressive when it comes to the suspenseful scenes of the feature. Especially impressive is Lee's execution (no pun intended) of abrupt & frank instances of grisly violence in these scenes. These bursts of blood upend the heretofore quietly unnerving proceedings so well. They also instill an appropriate sense of unpredictability to the journey of the lead characters. Anything can happen on this mission for lost gold.

There's so much in Lee's bold creative vision for Da 5 Bloods worth celebrating. The recurring incorporation of real-world images and archival footage are well-done, particularly in a prologue that establishes the political climate of America in the 1960s and 1970s. Meanwhile, there's a number of extremely creative uses of Marvin Gaye's songs throughout the soundtrack. Particularly brilliant are three different renditions of Gaye's What's Going On, each of which manages to imbue this song with a different tone. The 2020 movie Da 5 Bloods utilizes this 1971 tune in such an inspired manner. It's just one of the many ways Da 5 Bloods so ingeniously reflects the relationship between the past and the present.
Posted by Douglas Laman (NerdInTheBasement) at 7:27 PM