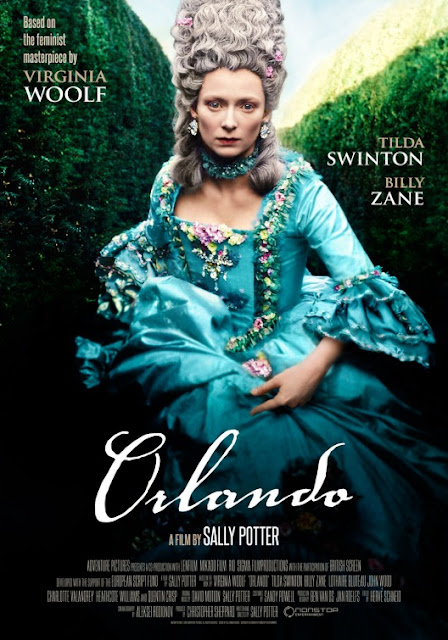 What is it about Tilda Swinton that makes her such a compelling actor? I mean, on the most basic level, she's just a good performer, one who thoroughly commits herself to any role she takes on. But I'd also say that what makes Swinton so captivating is how she always stands out from the crowd. Many performers excel by channeling an "everyman" quality, but Swinton's de facto aura suggests there's something idiosyncratic about her. It's an aspect of her acting that's especially impressive since she can use it in so many different styles and tones. In Lynne Ramsey's We Need to Talk About Kevin, for example, Swinton uses this aspect of her acting style in a haunting manner to indicate how detached her character is from the rest of society after her son becomes a school-shooter.

This quality of Tilda Swinton is also put to great use in Sally Potter's Orlando in portraying a character who travels through different centuries and gender identities across the course of one movie. Swinton's character is that of Orlando, who begins this movie as a brash figure of royalty circa. 1603. Orlando is a man fixated on poetry, women and preserving the castle left to him by Queen Elizabeth I. Eventually, he travels to the Ottoman Empire, becomes involved in a conflict over there and then finds himself transformer into a woman. Returning home, Orlando now finds his entire existence turned upside down. All kinds of restrictive laws applying exclusively to women now confine her from, say, owning an enormous castle without having a husband.

Orlando, which is based on a Virginia Woolf novel from 1928, and its contemplative narrative spanning from the 17th-century to 1992 can't help but remind me of the 2012 film Cloud Atlas. Most notably, both films end up contemplating what defines a person. Society tends to have a very surface-level view of how we define ourselves. Possessions. A simplistic reading of gender. Money. Orlando begins this story enamored with those type of entities, determined to cement his legacy through more trivial means. As the film goes on and both Orlando and the world around him are transformed, a more complex reading of what it means to have a fulfilled existence begins to emerge.

Much like Cloud Atlas, Orlando probes deeper on what can make a person last. Maybe it's a piece of art they create. Maybe it's a love shared between two people. Maybe it's even something as simple as just exhibiting kindness to another person. Not everything can endure over centuries of history, as Orlando learns over the course of this film. It's a lesson writer/director Sally Potter manifests in such fascinating ways that aren't afraid to embrace a grandiose sensibility to make their point. Orlando can run through a World War I battlefield to visually signify her own inner turmoil while Orlando's shift from male to female occurs through shimmering light that lend a majestic quality to the sequence.

Potter's visual work in Orlando is truly resplendent and it manages to make the underlying themes of the movie equally powerful. Potter's visual style is accompanied by excellent cinematography by Aleksei Rodionov and particularly gorgeous costume work by Sandy Powell & Dien van Straalen. Not every costume designer could handle the task of conjuring up outfits adhering to a myriad of fashion aesthetics based on different centuries of history. But that's just what Powell and van Staallen have managed to accomplish with their work in Orlando. No matter what era Orlando occupies, they're accompanied by radiant costume work that perfectly conveys whatever time period the story is taking place in.

Orlando is such a visual feast that it could have just coasted by on a surface-level thematic exploration of its central themes. But Potter's script instead delivers a weighty examination of those themes, ditto for Tilda Swinton's lead performances. Swinton's aforementioned talent for having an immediately distinct personality is a perfect fit for the character of Orlando, who starts out this story so confident in his every thought he even has the ability to make small asides to the audience. Swinton renders that confidence vividly but she lends equal levels of conviction to each new place Oralando's perspective evolves to over the course of the runtime. It's a truly magnificent lead turn that manages to emerge as one of Swinton's very best performances, which is really saying something. Swinton alone makes Orlando worth watching but there's still plenty of other parts of this Sally Potter directorial effort with praising highly.
Posted by Douglas Laman (NerdInTheBasement) at 11:02 AM