In Laman's Terms: Gone With the Wind and Reconsidering What Makes a "Great" Movie 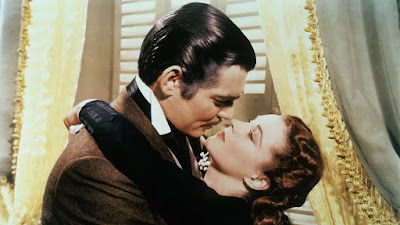 CW: References to racism & murder ahead

The ongoing worldwide protests responding to the deaths of George Floyd, Breonna Taylor, and countless others as a result of case-based police brutality have already had impressive ripple effects. Most importantly, the city of Minneapolis will be dissolving its police department in favor of an alternate form of law enforcement. Statues of Confederate figures are being torn down while the phrase Black Lives Matter is becoming a part of the mainstream lexicon. There's so much work left to be done, including bringing the murderers of Breonna Taylor to justice. But it's clear that change is in the air. People are inspiring a revolt against the racist status quo and it's incredible to watch unfold.


Part of that status quo, of course, includes pop culture. In the wake of a renewed focus on systemic racism, studios, TV channels, and streaming services are all taking a look at what kind of content they've been producing & distributing. This has led to certain programs suddenly becoming unavailable, including the 1939 motion picture Gone With the Wind. Last night, it became apparent that this feature was suddenly unavailable on the new streaming service HBO Max. A mild panic broke out among old white people and right-wing commentators (but I repeat myself) over the fact that a movie widely available on every home video format available to man wasn't also available on a streaming service barely anybody uses.

Interestingly, this wasn't just a random move on the part of HBO Max. It appears Oscar-winning screenwriter John Ridley has at least partially inspired HBO Max to remove Gone With the Wind from their library. On June 8, Ridley penned an op-ed for The Los Angeles Times entitled Hey, HBO, ‘Gone With the Wind’ romanticizes the horrors of slavery. Take it off your platform for now. Per Ridley, "It doesn’t just ‘fall short’ with regard to representation. It is a film that glorifies the antebellum south. It is a film that, when it is not ignoring the horrors of slavery, pauses only to perpetuate some of the most painful stereotypes of people of color.” Ridley's essay goes on to further explain how Gone with The Wind romanticizes the Confederacy, erasing the horrors of their slave-endorsing actions in the process.

Now, before going forward, I want to make something clear: what HBO Max has done here is not censorship. An individual business not holding a title for sale is not an example of censorship. Gone With the Wind still exists, it's not being burned in the town square just because HBO Max isn't carrying it at this time. Just because these circumstances befell something that appeals widely to old white people doesn't mean it's censorship. To boot, HBO Max is planning to bring the title back in the near future with accompanying material meant to give the project a greater sense of historical context. In my opinion, that's a great idea and should become the de facto approach for watching and presenting a movie like Gone With the Wind in the future.

Gone With the Wind isn't just a racist movie by the standards of 2020 pop culture. In its original 1939 theatrical release, the film was already drawing negative responses from African-Americans. Their complaints echoed the grievances John Ridley penned in his L.A. Times op-ed; the film glorified the Confederacy and engaged in harmful stereotypes against Black people. Confronting how inherently harmful Gone With the Wind is isn't the result of a "PC" boogeyman coming to claim another victim in the crusade against free speech. Instead, to confront the racism of Gone With the Wind is to confront complaints about the movie that have always been there as well as aspects of the production that are as plain as the nose on my face.

To boot, Gone With the Wind, unlike many films from 1939, still holds a major place in 2020 pop culture. Theatrical screenings of the film still happen with frequency in the modern world and tend to draw big crowds. Just last year, Gone With the Wind grossed $2.17 million from just four days of theatrical exhibition. 81 years later, Gone With the Wind is still popular and spreading both a distorted & dangerous view of both the Confederacy and Black people. This is how normalized racism is in every aspect of our society, including pop culture. A movie like Gone With the Wind can still play to sold-out crowds as a crowdpleaser motion picture without even an ounce of thought for what kind of toxic side-effects it has had in the broader world

Part of how Gone With the Wind has proven to be so influential plays into another larger problem related to what kind of films are deemed "essential classics" by American film discourse. Like The Birth of a Nation, Wind has long been seen as a sacrosanct entry into the American film canon. They've been elevated to a stature above most other American movies and that's an issue for a number of reasons. For one, it makes starting discussions on the complexities of Wind and Nation's racist qualities nearly impossible. Who wants to be the person who points out that these cinematic Emperor's aren't wearing royal robes but rather Klansman uniforms?

For another, the widespread influence of movies like Gone With the Wind normalizes racist approaches to people of color in American cinema. The entire cinematic language of American films is built upon the idea that racist works from D.W. Griffith and Victor Fleming are the ideal way to make movies. Movies like Gone With the Wind that prioritize white perspectives above all others while reducing people of color to supporting caricatures aren't just a product of 1939. They're alive and well in modern-day movies like The Blind Side, Free State of Jones, and Million Dollar Arm. This what happens when we don't confront our racist past. We end up with a present-day world that's hardly moved forward at all.

How can we move forward then? Well, presenting classic films like Gone With the Wind alongside disclaimers, featurettes, and interviews that recontextualize its problems would help. Even more helpful would be placing a greater emphasis on works made by filmmakers of color, particularly ones from the 20th-century. For example, twenty years prior to Gone With the Wind's retrograde approach, Oscar Micheaux was directing films like Within Our Gates that treated Black characters with actual humanity. Meanwhile, Tressie Souders directed the film A Woman's Error in 1922, becoming the first Black woman filmmaker in the process.

The fact that I, a film critic whose studied movies extensively, didn't know the name of Souders until writing this piece exemplifies both my own blind spots as well as how deeply flawed the general perception of film history is. Scarlett O'Hara gets to dominate the space of classic cinema while the works of Micheaux and Souders get little to no recognition.

Names like Souders, as well as other early Black women filmmakers like Kathleen Collins, Madeleine Anderson, and Safi Faye, should be every bit as prominent in our discussions of important filmmakers as the people behind Gone With the Wind have been. The fact that they arne't exemplifies how what we consider to be great movies is rooted in the idea that only the perspectives of white artists matter in this medium. In reality, nothing could be further from the truth. The works of directors like Micheaux, Collins, and Julie Dash exemplify the very best qualities of what film as an artform can accomplish.

Let's use Gone With the Wind's sudden absence from HBO Max as a chance not for inaccurate whining about "censorship". Rather, this is a chance to reflect on the inherently toxic ways American cinema deems something a classic. It's also an opportunity to listen to voices like John Ridley and their quarrels with the widespread dehumanizing prominence of films like Gone With the Wind.
Posted by Douglas Laman (NerdInTheBasement) at 11:05 AM