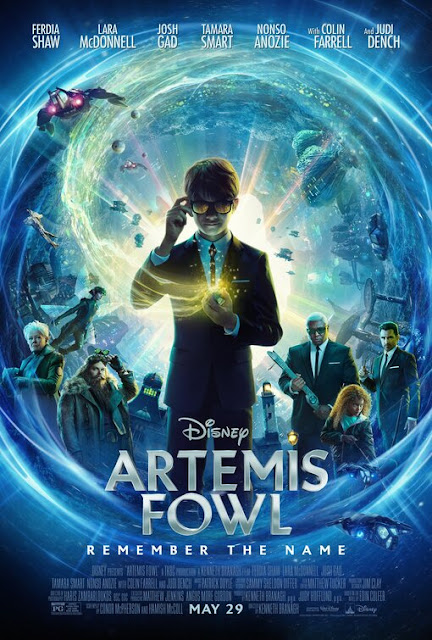 Why is Artemis Fowl getting released in 2020? At least there'd be some logic to its existence if it had debuted in the years between 2006 and 2010. That's when Harry Potter knock-off's like Eragon, The Seeker: The Dark is Rising and The Spiderwick Chronicles ran rampant. Artemis Fowl would have fit right in. But in 2020, even knock-off's of The Hunger Games have leveled off, Harry Potter knock-off's are practically extinct. Artemis Fowl now emerges in 2020 as a visitor from the distant past, from an era when The Black Eyed Peas topped the Billboard charts, and the Tiger Woods scandal was still fresh news. Whatever year it premiered in, though, Artemis Fowl, which is now streaming on Disney+, would still register as a totally bad movie.


Hailing from a series of novels by Eoin Colfer, the titular Artemis Fowl (Ferdia Shaw) is a ten-year-old boy with super-duper high levels of intelligence. He's also established as being incredibly arrogant and having contempt for most people. His dad, Artemis Fowl Sr. (Colin Farrell), is a grown-up who's constantly absent from his son's life. Whenever he is around, he tells little Artemis extended stories about fairies and magical creatures. When Artemis Fowl Sr. goes missing, Artemis Fowl learns that not only was his dad a thief but all those fantasy stories are true. Fairies, goblins, trolls, they all exist and one of those creatures have kidnapped his dad. Artemis begins to devise an elaborate plan involving a mystical object called the Aculos all to get his father back.

Directed by Kenneth Branagh (yes, that Kenneth Branagh) and written by Conor McPherson and Hamish McColl, Artemis Fowl proves to be a baffling production at every turn. For starters, the character of Artemis Fowl is such a weird creation. For starters, it's hard to see how the character, as written here, would be appealing to children. Most children's story protagonists (Harry Potter, Matilda, Ramona, etc.) are underdogs to reflect how kids feel so overwhelmed by the adult world around them. I can't imagine a wealthy super-intelligent kid with vaguely defined interests as Artemis even working for youngsters as a wish-fulfillment figure, let alone as someone they could connect with.

McPherson and McColl's screenplay further puzzles in how it opts to tell a fantasy story with such a limited amount of locations. The majority of Artemis Fowl takes place in Artemis' home of Fowl Manor. A $125 million-budgeted Disney blockbuster has the same amount of different locations you'd find in a Full Moon Features or Blumhouse production. Meanwhile, much of the runtime of Artemis Fowl is dedicated to an avalanche of voice-over narration. It appears voice-over work has been employed to provide exposition once meant to be delivered in a barrage of deleted scenes. This wall-to-wall voiceover reminds one of fellow 2020 family movie dud Dolittle or the obvious creative inspiration for Artemis Fowl, Future War,

Much of this voice-over is provided by Josh Gad's comic sidekick Mulch Diggums (Josh Gad) a dwarf/giant mixture. Gad has chosen to give Diggums a voice reminiscent of what a five-year-old would think an intimidating voice would sound like. I emitted an audible "Oh no!" upon realizing his scraggly vocals would be playing such a heavy part into the proceedings. It's a mystery who decided Gad, the man responsible for Olaf the Snowman, would be a good fit for a grouchy anti-hero role, but it's a terrible piece of miscasting. Of course, it's doubtful any actor could have made Diggums' massive CGI maw not terrifying. Josh Gad unleashing his gigantic mouth in Artemis Fowl is more terrifying than anything seen in either of Ari Aster's two movies. Also underwhelming in the supporting cast is Judi Dench as a fairy commander. Every time Dench is on-screen, she looks like she doesn't want to be here. Dench managed to look engaged throughout Cats and even she can't muster up anything resembling a pulse for Artemis Fowl.

Who can blame Dench for her lack of interest considering the lifeless movie she's inhabiting? Even the action scenes of Artemis Fowl are devoid of excitement. Much of the action in Fowl is just a mixture of noise, unconvincing CGI and awkward camerawork. Branagh's previous forays into action movie filmmaking, Thor and Jack Ryan: Shadow Recruit, were far from impressive. But even the middling action seen in those films was a drastic improvement on what passes for a set piece in Artemis Fowl. No matter how much CGI or chaos is happening on-screen, Artemis Fowl fails to make one care about any of it. There's a reason people say quality should come over quantity. Artemis Fowl is a key example of what happens when quantity utterly suffocates quality.

After all this unengaging material, Artemis Fowl dares to end its runtime on a scene establishing Artemis and his new cohorts Diggums and fairy cop Holly Short (Lara McDonnell) heading off on a new adventure. It's a gob-smackingly insulting scene that renders Artemis Fowl as merely a feature-length post-credits sequel tease. After a whole movie of inert action, tedious characters and insultingly bad jokes (who thought a gluten reference would be timely in 2020?), Artemis Fowl expects viewers to actually be excited at the prospect of further Artemis adventures? No. Way. Send Artemis Fowl back to 2009 where it belongs.  Let it gather dust with that terrible Lightning Thief movie.
Posted by Douglas Laman (NerdInTheBasement) at 11:18 AM