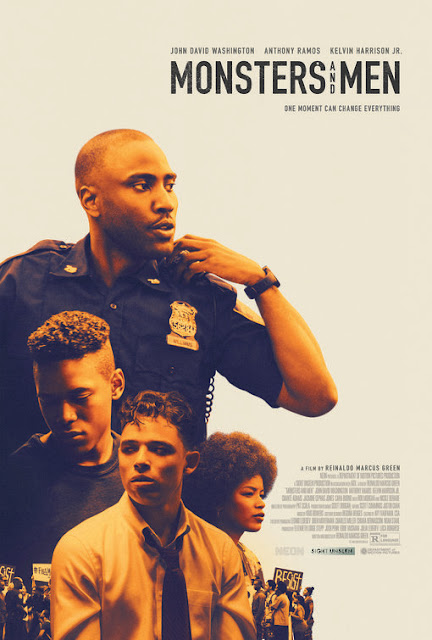 CW: References to police brutality ahead

Monsters and Men is a 2018 feature from writer/director Reinaldo Marcus Green that was intended to be inspired by the death of Eric Garner. Though we don't technically see the death of the Eric Garner stand-in at any point in Monsters and Men, pieces of dialogue (particularly mention of the now-deceased person being murdered by police for selling cigarettes) make it clear who this story is about. Of course, Eric Garner is not the first Black person to die at the hands of the police. Acts of violence on the parts of police officers motivated by racism have been going on since basically the police were invented. They've also certainly been rampant in the six years since Garner's death.

In 2020, Monsters and Men's story still carries a relevant sting. Within this film, one can see parallels to ongoing protests against racism happening around the world right now. This isn't just a movie about Eric Garner. It's about Breanna Taylor. It's about George Floyd. It's about the countless Black trans people murdered every year. Monsters and Men may have been inspired by a real-world event from 2014 but Green is clearly crafting a film that's meant to resonate in any year. Green's script for Monsters and Men is split into three different sections, each following a different person. The first of these storylines follow Manny Ortega (Anthony Ramos), a father and former felon looking for work.

One night, Manny witnesses and films with his cell phone his unarmed friend, Darius Larson, being murdered by police. Manny is pressured by everyone around him, including a couple of cops, to wipe that cell phone footage off the face of the Earth. Meanwhile, our second story focuses on Dennis Williams (John David Washington), a police officer caught between two worlds. On the one hand, he's well aware of the racist practices of police officers, but on the other hand, he feels the need to defend his occupation anyone who questions it. And then there's Zyrick (Kelvin Harrison Jr.), a High School senior with ambitions of playing at a good college next year. However, in the wake of the murder of Darius, his focus gradually begins to shift towards doing local activism.

Something particularly interesting about Monster and Men's story is how Green emphasizes the difficulty of standing up to systematically-ingrained corruption. To do something noble is not a guarantee that you'll never have anything bad happen to you. On the contrary, instances of Manny and Zyrick taking an active approach in confronting corrupt law enforcement tend to inspire derision rather than support from the people around them. Righting wrongs is an uphill climb, especially for marginalized members of American society. However, even in the face of tragic hardships, there's something quietly stirring about how Monsters and Men remind viewers that anyone can make a difference.

Just like in the real world, it's everyday individuals like Manny and Zyrick who manage to influence change. Meanwhile, somebody with actual influence and power, like Dennis Williams, tends to be complicit in systemic racism. Green's script weaves a nicely-realized complex mindset for Williams, but in the end, he's still somebody who refuses to stand up against what he knows is wrong. There's a reason his storyline ends with him witnessing fellow officers engaging in the racist practice of stop-and-frisk and proceeding to do nothing. It's not enough to know something's wrong. You have to speak out against it. As Monsters and Men constantly demonstrates, that's never an easy thing to do but it is an essential thing to do.

Green's exceedingly wise script is accompanied by his direction that lends visceral underlying tension to even mundane conversations scenes between Williams and his wife. Meanwhile, the cast of Monsters and Men is all-around impressive, with the two stand-outs being Anthony Ramos and Kelvin Harrison Jr. The latter actor continues to impress me in his ongoing streak of exceptional film performances (everyone needs to see his incredible work in Luce) I'm so excited to see where Harrison Jr. goes next as a performer. For now, though, let's focus on his 2018 film Monsters and Men, a thoughtfully-crafted drama that casts an eye upon the humanity needed to confront systemic evils.
Posted by Douglas Laman (NerdInTheBasement) at 11:23 AM