Puncture Wastes A Promising Story On a Clumsy Screenplay 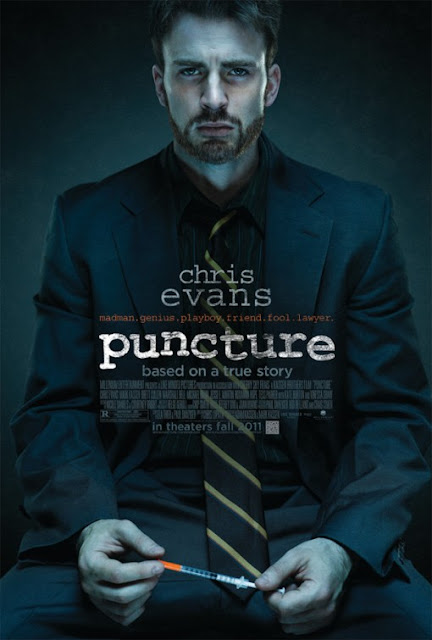 "Sometimes the brightest light comes from the darkest places" is an oft-repeated line throughout Puncture. It's one of a number of dialogue motifs throughout Chris Lopata's screenplay, which also includes a large number of food-based metaphors. Unfortunately, none of these recurring fixtures manage to amount to a thoroughly compelling courtroom drama. That's a shame given that Puncture is based on an interesting true story. A lawyer mired in drug addiction who also sought to take down hospitals that were jeopardizing medical workers by continuing to use bad needles. That's an intriguing set-up that doesn't get executed well.


Mike Weiss (Chris Evans) isn't a bad attorney necessarily but he is prone to being overwhelmed by his demons. Struggles with his addiction to hardcore drugs (including heroin and cocaine) make him frequently late for meetings and courtroom assignments, much to the chagrin of his law partner Paul Danzinger (Mark Kassen). However, the newest case for Weiss and Danzinger has riled up the better instincts of Weiss. The case concerns a nurse who contracted AIDS thanks to a faulty needle at the hospital that she worked at. A friend of hers has concocted a far safer needle that could save countless lives. No hospital will look at it. Why? Turns out, there's big money in the world of medical supplies. Hospitals don't wanna upset all that cash.

In taking on this case, Weiss and Danzinger have to fight countless massive corporations, all of whom will ensure the two lawyers struggle to get any new clients The stakes couldn't be higher, so why does Puncture so often lack suspense? Partially, it's because Lopata's script struggles to imbue lasting consequences for key events. Midway through Puncture, Weiss suffers a major medical emergency that requires him to be rushed to the hospital. Seemingly a critical turning point for the story, he's up out of that bed and back to his lawyer case in the span of a scene. Rather than having this health crisis leave a lasting impact on Puncture, Lopata chooses to brush it off like it barely even happened.

Meanwhile, the script also suffers from a sense of extreme conventionally. Despite working with such a unique story, Puncture has some truly hokey narrative elements. These range from attempts at thoughtful dialogue like the aforementioned "Bright likes darkest places" line to the physical characteristics (such as heavy amounts of tattoos) used to mark characters as drug addicts. There's also the sudden third-act presence of a character played by Michael Biehn who provides impromptu aid to Puncture's protagonist. He's an abrupt savior figure that doesn't fit at all into the grimy grounded aesthetic of the rest of the film.

Directors Adam and Mark Kassen fail to provide any more of a personality to Puncture in their filmmaking. Their camerawork is mostly competent but it rarely suggests much of an identity. Even the rare notable visual flourishes, like opting to use only wide shots for an early courtroom scene, feel random rather than purposeful. Between the uninvolving characters and stagnant camerawork, it's hard to get invested into Puncture. Thankfully, a few details here and there help keep the production from being totally disposable. Among such details is the lead performance from Chris Evans, a guy who has demonstrated a knack for playing morally complex characters across his career.

His work in Puncture is nowhere near as good as his delightful scumbag turns in Scott Pilgrim and Knives Out and scenes where Evans is demonstrating his exceedingly muscular physique somewhat undermine the idea that Weiss is a studious lawyer with an addiction problem. Still, Evan lends a convincing nature to the frustrated yet doggedly determined nature of Weiss. Even when the script hands him clumsy dialogue to deal with, Evans usually finds something human to deliver. The supporting cast mostly delivers fine work as well, it's just a shame this roster of actors couldn't be given a more engaging thriller to appear in. Maybe the brightest lights come from the darkest places, but as Puncture proves, great films don't come from lousy scripts.
Posted by Douglas Laman (NerdInTheBasement) at 1:00 PM