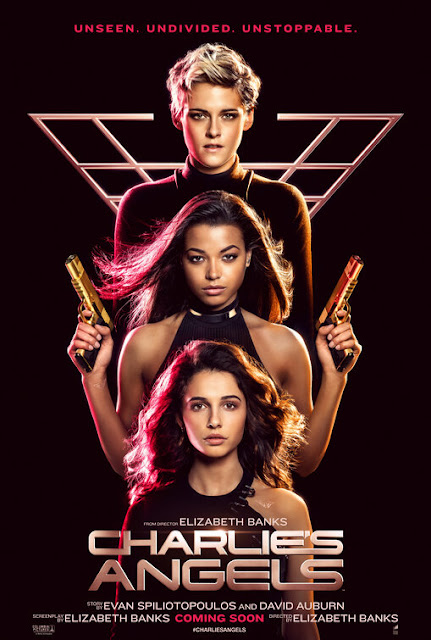 First drafts can be rough. Speaking from experience on this matter, first drafts can frequently hold a lot of promise but also a lot of rough patches. Ideas may not be as fully-formed as they should be. The structure of your piece can be clumsy. Your singular voice may not shine through as distinctively as it should. No worries, though. After all, who gets it right on the very first try? Certainly not me! Unfortunately, Elizabeth Banks' Charlie's Angels reboot feels like the cinematic equivalent of a first draft. Full of promise and hinting at something interesting but it still needed some more work.

The third feature film adaptation of the 1976 TV series of the same name, Charlie's Angels always concerns three members of an elite group of lady spies who all report to an unseen male leader by the name of Charlie. This go-around, the trio consists of Sabina Wilson (Kristen Stewart), Jane Kano (Ella Balinska), and Elena Houghlin (Naomi Scott). Houghlin just got recruited by Wilson and Kano due to her work on an Alexa-like device named Calisto. Turns out, somebody plans to use Calisto for nefarious means! Now these three women, alongside mentor figure Bosley (Elizabeth Banks), are off to try and save the world.

The screenplay for Angels (penned by the film's director, Elizabeth Banks), which sees the three angels entirely separated from a larger spy agency, seems to be channeling the "spies on their own angle" of recent James Bond and Mission: Impossible movies. It's not a terrible set-up for a spy adventure film and Banks shows a solid proficiency for creating the skeleton of individual character arcs for the trio of protagonists. Her script also manages to pull off a big twist in regards to who the actual villain of the piece is that actually caught me off-guard, which is always fun. The penchant for Charlie's Angels to abruptly incorporate pretty gruesome deaths for its various foes also turns out to be a treat.

Banks also shows some chops as a director when it comes to camerawork related to either comedy or reflecting the points-of-view of her characters. For example, an early sight gag that reveals Houghlin has been vomiting just off-screen has got a good sense of timing. Speaking of Houghlin, an early scene depicts her talking to her boss Peter Fleming (Nat Faxon). The camera lingers on Fleming's grabby hands and his mouth spitting out condescending rhetoric towards Houghlin. These visual touches nicely reflect toxic work environments where men wield power over women even in what men perceive as just "mundane" conversations. Conceptually, this depiction of everyday horrors women have to go through should make for a great contrast to the freeing and exhilarating spy action in the rest of Charlie's Angels.

Unfortunately, the execution of the action scenes in Charlie's Angels leave a lot to be desired. An early car chase scene sets a bad precedent for what's to come on a filmmaking level. A flurry of clumsy camerawork and awkward editing (how many cuts do we need to depict a car tumbling down a flight of stairs?) plague what should be Houghlin's harrowing introduction to the world of spy antics. Similarly underwhelming directing and editing creeps into each of the subsequent set-pieces. These include an extended fight in a factory right next to a rock quarry that feels surprisingly cheap in every respect. There's just not much in the way of excitement in Charlie's Angels, though that flaw isn't entirely due to the action scenes.

The lack of propulsive thrills can also be chalked up to the lack of a really good villain for the leads of Charlie's Angels to fight. Because Angels has chosen to conceal the main villain until the last twenty minutes, the rest of the movie gives the three protagonists an assortment of generic mini-bosses to fight. These include a rich Australian guy, a nearly-silent tattooed assassin, and a tech billionaire played by Sam Claflin (looking an awful lot like Michael Fassbender). None of them have much in the way of a personality and they're not very fun to watch. Without a concrete antagonist to anchor the story, the sense of stakes in Charlies Angel's remains hard to get invested in.

Also dragging Charlie's Angels down are a number of other awkward elements in Banks' screenplay, including way too much time spent explaining what Calisto is as well as weird tonal shifts. Sometimes Charlie's Angels is going for a Kingsman vibe. An overlong comedic conversation about Birdman of Alcatraz feels like the kind of improvised comedy one finds in a Judd Apatow comedy. An out-of-nowhere montage of women in various career field at the very beginning has the atmosphere of a Ford trucks commercial to commemorate International Women's Day. The climax set at a fancy mansion with neon interior lighting seems to have been lifted from a John Wick sequel. Charlie's Angels oscillates between numerous different tonal influences but struggles to create its own distinct identity.

On a more positive note, the three leads of Charlie's Angels are consistently a delight. As the audience point-of-view character, the extremely charismatic Naomi Scott proves to be an enjoyable presence, particularly in comedic moments emphasizing how she's so new to the world of espionage. Meanwhile, Kristen Stewart gets the best moments of the entire production in her turn as Sabina Wilson. Stewart has excelled as a dramatic actor in such grim fare, who knew she could also do a wisecracking Han Solo-esque personality so well? All three of the main performers in Charlie's Angels are so charming that I wouldn't mind seeing them in further Angels adventures. Let's just hope such sequels are less of a cinematic first draft than the 2019 Charlie's Angels.
Posted by Douglas Laman (NerdInTheBasement) at 10:22 AM