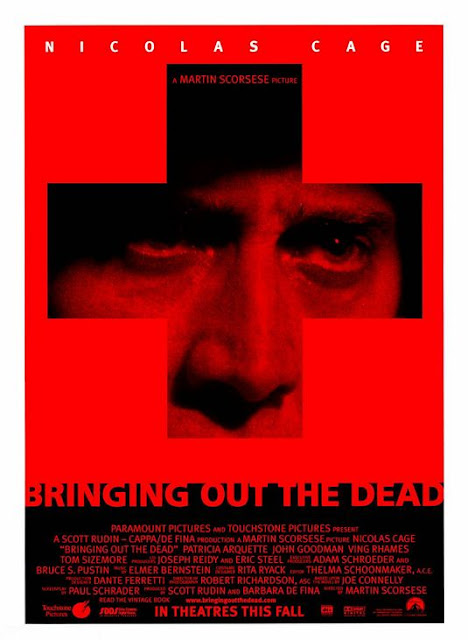 Death haunts Frank Pierce (Nicolas Cage). That's to be expected given that he works as an ambulance driver in New York City. But for Pierce, it goes deeper than that. During his graveyard shifts, he's constantly plagued by hallucinations of a young woman he couldn't save. Every sidewalk he glances at or stores he wanders into, there she is, reminding him of how he failed her. His entire job is dedicated to helping people & saving lives yet here's a reminder that he failed at that job. Over the course of Bringing Out the Dead, Pierce grapples with the state of his life while interacting with a host of characters who have their own relationship with the fine line between life & death.


The sweeping supporting cast of colorful NYC residents in Bringing Out the Dead echoes the earliest Martin Scorsese directorial effort After Hours. Whereas that was a screwball dark comedy, Bringing Out the Dead is a much more grim use of the myriad of vibrant personalities that wander the streets of NYC at night. Such characters tend to be much more confident in who they are compared to the constantly paranoid Pierce. Devoted Christian Marcus (Ving Rhames) and mellow drug dealer Cy Coates (Cliff Curtis), for example, aren't devoid of their own personal hardships but they also know exactly what path they're walking and why. Pierce, by contrast, is starting to lose any semblance of what's real anymore.

The dissonance between the protagonist and the supporting players in his story is one of the many excellent qualities of Paul Schrader's screenplay. Another such exemplary feature is the creative ways Schrader manifests Pierce's internal anxieties. The recurring appearances of a hallucinatory ghost consistently carry an eerie quality because of how casually Schrader drops them in a given scene. This woman doesn't emerge as a jump scare, she's lingering in the corner of the frame or staring at the camera on a street corner. An extended nightmare sequence, triggered by Pierce taking a narcotic, realizes Pierce's guilt over lives lost in a harrowing manner. There's a sense of haunting madness in this sequence that vividly captures what kind of mental stress Pierce is living with.

Also commendable in Scharader's screenwriting is a refusal to let Pierce and the other characters walk tidy paths. Bringing Out the Dead is tackling weighty questions related to dealing with life, loss, and recognizing the humanity in others. Such questions don't typically have easy answers and the narrative paths Dead's characters walk down are similarly complex. This is especially true of the relationship between Pierce and Mary Burke (Patricia Arquette). When these two started talking to each other, I was certain I knew exactly where their storyline was going. Surely Bringing Out the Dead was going to give them a conventional romantic subplot with all the expected narrative beats.

Instead, the two of them engage in a plotline that's intentionally framed just like the process of coping with the loss of a loved one: messy. Pierce and Burke connect, disconnect, drift apart, come together, their rapport is always marked by a sense of uncertainty. In some scenes, it even feels like Burke is on her own journey separate entirely from Pierce. Burke isn't functioning as just Pierce's love interest. She's more like another person, like fellow Dead supporting players like Noel (Marc Anthony), briefly caught in the pull of Pierce's gravitational pull. Pierce and Burke's storyline provides a great reflection of Bringing Out the Dead's complex nature as well as just thrillingly unpredictable storytelling on its own terms.

Speaking of thrillingly unpredictable, Nicolas Cage turns out to be a perfect choice for the lead role of Frank Pierce. Cage's entire career has been predicated on having the gusto to embrace over-the-top performances and lend them a one-of-a-kind style of commitment. While this talent has spawned its share of mocking memes, films like Mandy and Bringing Out the Dead (just to name a few) demonstrate that Cage is more than capable of using this gift of his for deeply human performances. For the character of Frank Pierce, Cage is able to both vividly and subtly portray how much of a toll Pierce's internally tormented psyche is taking on his body.

The latter quality of subtlety is conveyed in elements of Cage's performance like just the way he portrays Pierce walking around in any given scene. Pierce is always moving like he's got the weight of the world on his shoulders, he doesn't even need to open his mouth for the viewer to understand he's dealing with intense woes. Such turmoil rooted in elements of spirituality have defined some of Martin Scorsese's best movies like The Last Temptation of Christ and Silence. Bringing Out the Dead easily slips into that high-ranking part of Scorsese's filmography. Dead's high level of quality can be heavily attributed to Scorsese's exquisite work behind the camera. He takes Schrader's imaginative visual representations of Pierce's grief and brings them to life with such chilling flair. Meanwhile, scenes of Pierce and his assorted co-workers driving through the dead of the night in NYC crackles with such live-wire energy. In other words, Scorsese's directing excels in regards to both the quiet dead and the rollicking living. A perfect quality to bring to a tale like Bringing Out the Dead.
Posted by Douglas Laman (NerdInTheBasement) at 1:35 PM