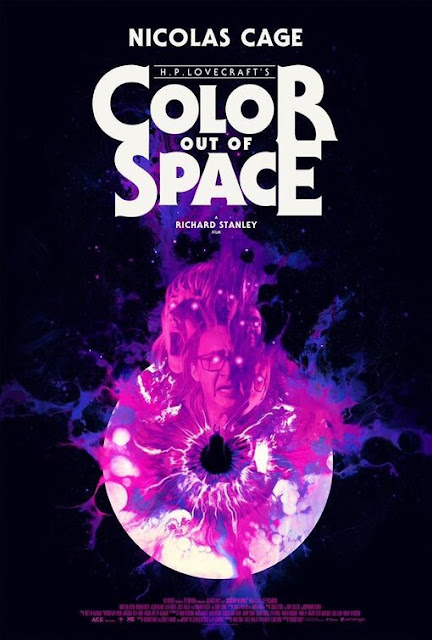 Families always change over time. It's only natural. The sun rises and sets, leaves turn brown and families evolve, it's all a part of life. But rarely has a family changed so significantly in such a short period of time as the Gardner family. Once upon a time, Nathan (Nicolas Cage), Theresa (Joely Richardson), Lavinia (Madeleine Arthur), Brenny (Brendan Meyer), and Jack (Julian Hillard) were just a happy family living on an isolated farm with their alpaca's. But ever since a meteorite plopped into their front yard, strange things have been happening. Strange lights keep flashing on and off. Nathan's been acting so irrational. Strange plants keep popping up. Could it all just be a bunch of peculiar coincidences? Or is something much more sinister happening here?


Color Out of Space serves as the long-awaited return of director Richard Stanley. His last feature film being the 1992 movie Dust Devil, Stanley's been keeping a low-profile ever since he was jettisoned from his passion project, The Island of Dr. Moreau. Having only directed a trio of documentaries since then, Color Out of Space see's Stanley recharged and ready to rumble. Instead of easing himself back into the world of narrative features, Stanley has decided to embrace an extremely stylized adaptation of the 1927 H.P. Lovecraft story The Colour Out of Space. It's an ambitious move but one that pays off nicely with some genuinely unnerving gonzo horror.

One of the smartest moves in the screenplay by Stanley and Scarlett Amaris is how much of Color Out of Space they leave to the viewers' imagination. Rather than bog down the movie with expository dialogue carefully taking viewers through what all the strange events mean or how they operate, Color Out of Space just lets the unexplainable be unexplainable. That's a good move for pacing but it's also smart in terms of heightening the tension of the piece. What you don't know, much like what you don't see, is usually the most terrifying thing of all. This means the random chaos that dictates so much of Color Out of Space proves to be quite unnerving, particularly in its frantic climax that throws any semblance of coherency to the end.

It's also noteworthy that Color Out of Space, much like Hannibal, Midsommar, or Annihilation, bases its visual palette on the idea that the most beautiful things can also be the most terrifying. Color Out of Space makes heavy use of bright colors, particularly purple, while a certain sequences take place in bright daylight. This ends up enhancing the foreboding mood thanks to a prominent sense of abjection. Unnerving sights and unusual behaviors are taking place against colors and lighting choices we're conditioned to accept as trustworthy. This effective & bold visual choice that runs throughout Color Out of Space, much like the meteorite's impact on organic organisms, twists the warm & friendly into something much more sinister.

Meanwhile, both the design work and primarily practical visual effects used to depict the warped state of creatures that have been unfortunate enough to cross paths with this meteorite are rendered in an appropriately grotesque manner. A group of alpaca's turned into one gigantic monstrosity positively harkens back to something one would see in John Carpenter's The Thing. Meanwhile, a creature resulting from two human beings getting fused together is an especially impressive feat of gnarly design work. This being is just uncomfortable to watch when it's just sitting there and the steady stream of screams emanating from it only makes it even more stomach-churning. That's just the kind of creature you'd want in a cosmic horror yarn like Color Out of Space.

While the horror and visual elements of Color Out of Space really are impressive, some aspects of the production don't quite hit their mark. The character of Lavinia, for example, has interesting moments as well as one particularly hard-to-watch scene. However, her character never quite coalescence into even a caricature that's fun to watch bounce off all the cosmic chaos, let alone a figure one can get dramatically invested in. Supporting figure Ward (Elliot Knight) also could have used an extra jolt of personality, especially given his eventual importance to the overall plot. On the other hand, Nicolas Cage makes for an extremely fun presence throughout the film, especially since his character gets to inhabit so many different types of personalities. Hog-wild Nicolas Cage surrounded by all kinds of grotesque sci-fi horror won't be for everyone. Personally, though, I found Color Out of Space to be a visually absorbing way to spend 105 minutes.
Posted by Douglas Laman (NerdInTheBasement) at 10:42 AM