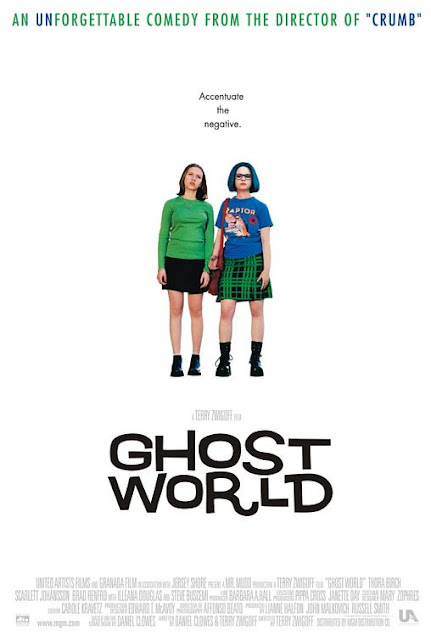 It took me a minute to fully get into Ghost World. At first, the pervasively jaded sensibilities of this Terry Zwigoff directorial effort just were rubbing me the wrong way. Maybe it was just the fact that I was watching a movie about characters who don't care about anything when there were so many real-world events to care about? Timing is everything, including when you watch certain movies. Anywho, it wasn't long before Ghost World won me over just as it's proved irresistible for so many others in the nineteen years since it debut. Turn out there's a lot more going on underneath its jaded surface beyond just teenage nihilism.


Enid (Thora Birch) and Rebecca (Scarlett Johansson) have just graduated High School. Grabbing their diplomas and giving their school building a big o'l middle finger, Enid and Rebecca have concrete plans for the future that entails them living together in an apartment. Rebecca is already off to the races with getting a new job to help pay for this apartment. Meanwhile, Enid is dragging her feet a bit. OK, maybe more than a bit. It's just that she's met this middle-aged music lover named Seymour (Steve Buscemi). He's hopeless when it comes to women and Enid is determined to get him a date with some lady. Soon, Enid can't stop thinking and talking about Seymour. His future becomes far more important to Enid than her own.

Screenwriters Zwiggoff and Daniel Clowes (the latter adapting his own graphic novel) has a very specific worldview. Imagine the dry observational humor of Daria mixed with the glib view of general humanity from Shoot 'Em Up. Like I said, it took me a while to warm up to Ghost World's point-of-view but eventually, it won me over. Partially this is because Zwigg and Clowes are just good at writing memorable lines for Enid and Rebecca to drop. These two wear their feelings about any given situation, location, or person on their sleeves and that makes for some amusingly upfront dialogue. Rebecca's passing comment of  "Mostly, I just wanna poison everybody" in response to how her new job is going is a great example of that.

Ghost World has its fun poking holes at the world its characters inhabit but eventually, something deeper emerges. Much like Superbad, Ghost World is a movie about how teenagers can get caught up in the most trivial things (I can personally attest to that being true) without sacrificing genuine sympathy for its teenage characters. Sure, Enid's focus on Seymour is obviously ridiculous but the Zwigoff and Clowes give a nice sense of motivation for why she'd become so fixated on solving this guys' romantic woes. It's a source of escapism for a person nervous about confronting her own tumultuous home life (including the return of a mother figure she doesn't care for) and the actual world of being an adult.

This critical part of Enid's character lends Ghost World some real depth while the characters themselves are stealthily so engaging. Whenever Enid or Seymour would get into potential jeopardy around the midway point, I found myself enjoyably surprised by how much I was invested in their individual plights. I had gone from being skeptical of Ghost World's whole aesthetic to being outright engrossed by it in certain scenes. Much of this has to be chalked up to the performers, particularly Thora Birch as Enid. Jaded teenagers are a common sight in movies but Birch lends some real distinctiveness to the role of Enid. Nobody else could replicate her sense of comedic timing while the way she lets moments of vulnerability shine through in Enid are truly impressive.

Steve Buscemi really walks away with the movie though in his turn as Seymour. It's easy to a middle-aged vinyl records collector being somebody that could easily become a caricature. But Buscemi has never been one to lean on just stereotypes for his performances. He always manages to unearth something unique in his acting and for the role of Seymour, Buscemi infuses the character with a state of weariness rather than creepiness. Seymour has quietly given up on anything in the world besides his records. He isn't gripped with self-pity, that would require too much effort. There's such subdued sorrow in Seymour's character and Buscemi renders that with such effectiveness. With a performance this good, it's no wonder Ghost World ended up winning me over.
Posted by Douglas Laman (NerdInTheBasement) at 5:01 PM