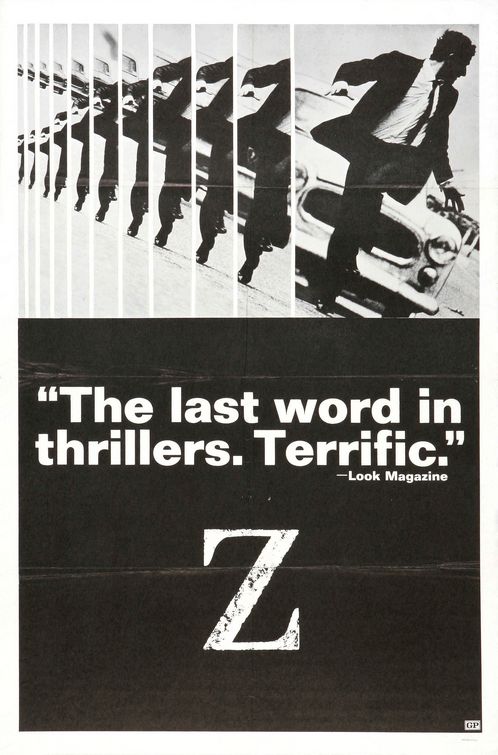 The 1960s weren't just a time of political upheaval in America. As the 1969 Costa-Gavras film Z demonstrates, countries all around the world were seeing citizens stand up to tyranny only to be brutally beaten down by governments in power. To reflect this, Z uses the real-life assassination of Grigoris Lambrakis as a source of inspiration for its tale. Only thinly-detached from reality, Z is a movie that today still stirs the soul and tragically resonates as something urgently relevant. Nothing can make the horrors of the 1960s (like the assassination of figures advocating for peace like Fred Hampton or Lambrakis) manageable but art like Z can help process these tumultuous times.

Screenwriters Costa-Gavras and Jorge Semprún begin the film with cheeky on-screen text stating that "any resemblance between this films characters and real-life figures is not a coincidence". Nary a few minutes into its runtime and Z is already courting danger. From there, we see that the stand-in for Lambrakis (known only as The Deputy) being assassinated after giving a speech regarding nuclear disarmament. His cohorts are also brutally beaten during this event. Afterwards, government officials attempt to spread the narrative that The Deputy was merely killed by a drunk driver, this was no coordinated killing.

However, the autopsy of The Deputy runs counter to these claims, which leads to The Examining Magistrate (Jean-Louis Trintignant) conducting an investigation into what really happened here. Part of the genius in Z lies in how it refuses to give its principal characters names. Though deeply rooted in 1960s Greek politics and especially rage at the Regime of the Colonels that controlled Greece, Z is aware that the saga of Lambrakis is not the only instance of governments stifling dissenting speech. Through eschewing names, Z is conveying the idea that the horrors perpetrated here can happen to anyone and not just one specific historical figure or fictional character.

The thoughtful writing is accompanied by equally detailed filmmaking, which perfectly captures the kind of intense atmosphere these socialist activists had to endure in this era of history. Around every corner there could be an assassin willing to do anything, including plow you down with their car, to wipe your voice out of the public sphere. The direction from Costa-Gavras and the editing from Françoise Bonnot perfectly capture this aesthetic by making the viewer feel as trapped as the characters in the movie! The depiction of violence against the central figures is also carefully and brilliantly realized. There isn't even a trace of grandeur in how this carnage is presented, a reflection of how Costa-Garvas doesn't want characters like The Deputy to become mythic martyrs.

As an extension of how Z aims to portray these characters as distinctly human beings, the depiction of violence against those characters is similarly grounded. It's brutal, it's fleeting, you can feel the confusion the characters must be feeling alongside their injures. Bonnot's editing once again proves crucial as her precisely-timed cuts here convey the sense of bewilderment felt by everyone in the crowd without lapsing into visual incoherence. Also, while I'm praising Bonnot's works, the scene where The Deputy's widow is meeting with a man who touches her check and then we cut to The Deputy doing that same gesture at an earlier time...what a masterful piece of editing. It says so much about this character without any dialogue. This is what top-of-the-line editing is capable of!

Z is really firing on all cylinders in every department, including in its second half that turns into a mystery. Smartly, Z doesn't play the idea of the government being corrupt as the shocking reveal, rather, it derives its mystery from seeing just how widespread this conspiracy is as well as the suspense over whether pivotal witnesses will live long enough to speak their truth. It's all so exquisitely-crafted and it only gets better in the movies final scene. Much like Spike Lee's BlacKkKlansman, Z offers up a seemingly hopeful ending before snatching it away. The message here is clear: the story here is not over. It's never over. That's just as true today as it was in 1969. The injustices chronicled in Z are as timely as ever while its incredible filmmaking is eternally impressive.

Posted by Douglas Laman (NerdInTheBasement) at 10:11 AM