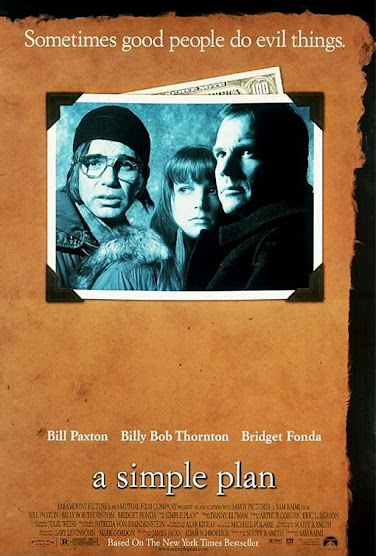 A Simple Plan doesn't automatically feel like a Sam Raimi movie. There's no Bruce Campbell or Ted Raimi appearances (that I could spot) for one thing. There are also no instances of the camera taking on the point-of-view of a menacing creature. It's also more of a grounded drama compared to the horror/comedy exercises Raimi is most famous. Something A Simple Plan does have in common with many other Raimi films, though, is the fact that, simply put, it's just really good. This is a gripping thriller that could have been a simple cautionary tale but leaves you with a lot more to chew on, particularly in regards to its lead performances.

Hank Mitchell (Bill Paxton) and his brother Jacob (Billy Bob Thornton) weren't planning anything special when they went out that snowy morning with Jacob's buddy Lou Chambers (Brent Briscoe). But while chasing a fox into the woods, they stumble upon something extraordinary: a bag full of cash money a crashed plane. There are millions of dollars in that bag and the trio opt to take the money and, once the heat has died down, use all that moolah to improve their lives. Keeping this whole thing under wraps becomes exceedingly more difficult than expected, with just the tensions between the three men being enough to sabotage this whole excursion.

The premise for A Simple Plan, based on a book by Scott B. Smith (who also wrote the screenplay), is a classic "be careful what you wish for" storyline. I could easily see this having been the plot of a Twilight Zone episode. The traditional nature of the story could be seen as a potential problem if executed poorly. How can this thriller be gripping if we know exactly how it goes? A Simple Plan sidesteps this issue entirely simply by relying upon engaging performances and letting us get to know the people who've opted to steal this money. The devil's in the details, as they say, and the details here turn what could have been a rehash into one of Raimi's best movies.

Raimi's intentional desire to just let these down-to-Earth ingredients take center stage is a stroke of genius. The characters in A Simple Plan are those great fictional creations that at once inspire our contempt but also our empathy. There's an underlying complicatedness to A Simple Plan that elevates the proceedings mightily. Also standing out are a number of exquisitely executed big suspense sequences that totally had me on the edge of my chair. A big scene involving the three main men and an attempt to get Lou to commit to a murder he didn't have any part in is the best of these sequences. Every new line in this segment had me totally engrossed, I just found myself waiting with bated breath over where these interactions would go next.

Such a scene makes great use of Thornton's performance as Jacob. When he first walks into the movie, I was so nervous this character would end up being a broad caricature. The haircut, the glasses held together with tape, his speaking style, it had me worried, I won't lie. But that initial trepidation turned into adoration as the movie went on. Jacob leaves behind any sense of being a stereotype behinds thanks to Thornton's acting. This actor's portrayal of Jacob being self-conscious about his status in life ("I've never even kissed a girl") informs the most heartbreaking parts of A Simple Plan. And his final scene! God, I can't stop thinking about it, Thornton just rips your heart out with his understated but deeply tragic work here.

Bill Paxton also excels in one his very best lead performances as Hank Mitchell. Paxton had more than enough range to fill out a variety of characters in his career. In the case of A Simple Plan, he's tasked with portraying an everyman who slowly reveals himself to be somebody who will do anything to keep this money under wraps. Through Paxton, you both fear and also see yourself in Mitchell, sometimes in the same scene. It's such a thoughtfully written character and Paxton portrays it beautifully. Raimi hasn't made many movies like A Simple Plan that are so stripped-down that they become largely dependent on the acting. But take away the buckets of blood and wall-crawling superheroes and it's apparent that Raimi can still deliver a movie as incredible as A Simple Plan.