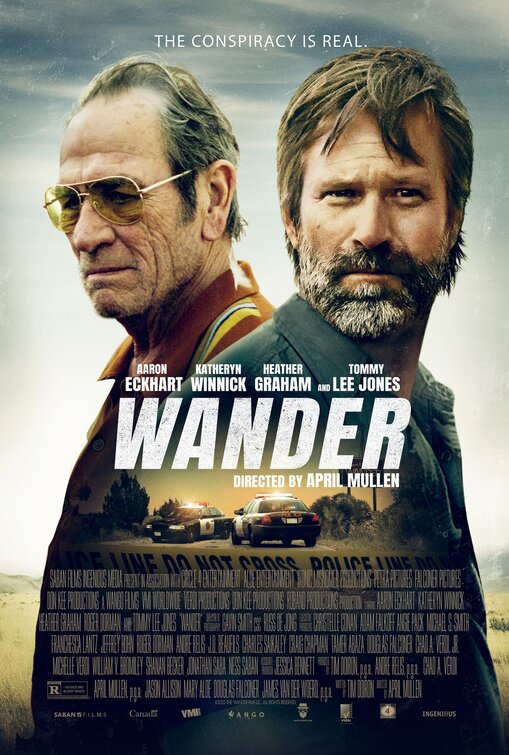 THIS REVIEW IS FULL OF SPOILERS

Wander is about 80 movies at once yet it doesn't really nail any of them. Let's get to it right away: this movie deals with Arthur Bretnik (Aaron Eckhart), a former private investigator who hasn't been the same since car crash killed his daughter and left his wife in a largely disabled state. Now, he's a conspiracy theorist nut living in a trailer with fellow conspiracy theorist and podcaster Jimmy Cleats (Tommy Lee Jones). He's called up by a woman to investigate the murder of a woman's daughter that takes him to the small town of Wander. The murder bears resemblance to the death of the guy responsible for the car crash that wrecked Bretnik's life, so he's interested in this matter.

Once he gets to Wander, the town is quite apparently creepy from the start and he has a hunch something bigger is going down. As it turns out, the citizens of Wander are all immigrants who've been implanted with tracking chips that go off and kill them if they try to leave the town. That's how that lady's daughter died. Bretnik isn't just investigating a murder, he's investigating one of his conspiracies come to life! Or maybe it's all a hallucination brought on by his meds.

My opening sentence isn't lying, Wander really is trying to be so much at once. It especially wants to be a thriller that keeps the audience guessing on what is and isn't real. Unfortunately, screenwriter Tim Doiron's way of keeping things "mysterious" is to just incorporate a lot of non-linear storytelling to mask how little is actually going on. There's a purpose to how Pulp Fiction or the 2019 take on Little Women play around with time. In Wander, telling things out of order simply means it takes longer for the movie to confirm it's going down predictable narrative paths. It's the cinematic equivalent of someone using a lot of big words to conceal the fact that they don't have anything to say.

The predictability of Doiron's script is what really kills it, especially in the second half where it really leans on ambiguity regarding what is and isn't real. Wander just doesn't have the depth to pull off that kind of grim drama. If you're gonna write a story involving immigrants who've been implanted with killer microchips, why not go full trash with it? At least then it could have moments of fun instead of being a predictable slog that aims to be a mixture of Memento and Wind River.

Neither of those two movies was dragged down by a miscast Aaron Eckhart. In a microcosm of his miscalculated performance, Eckhart constantly laying down grim narration where he tries to evoke classic film noir narrators. Instead, he merely sounds like he's doing a bad LEGO Batman impression. In terms of his physicality, Eckhart's approach to reflecting the most desperate parts of Bretnik's like are by bugging his eyes out and going super hammy. Some actors can make these kinds of oversized performances work, Eckhart just can't. Whenever he goes big, it feels strained rather than something that the likes of Al Pacino or Michaele Shannon can make as natural as a duck swimming.

Eckhart inhabits a story that, among its many other derivative qualities, also is way too in love with depicting people of color suffering gruesome murders on-screen. These individuals never get much in the way of names or personalities, they're just corpses meant to motivate Bretnik's investigation. Wander opens with on-screen text that calls for greater awareness of American systems that target BIPOC citizens and immigrants, which is noble. However, given how dehumanizing the ensuing film is to these communities, it feels out of place in Wander as that climactic text in The Miami Connection calling for the eradication of violence.

April Mullen's direction turns out to be the biggest saving grace of Wander. Her execution of dream sequences depicting Bretnik stumbling through his tormented past has an appropriately disorienting quality to it. There's also a smattering of evocative imagery throughout the movie and I can't help but admire her attempt to take the individual pieces of Wander and tie them together into a cohesive feature. Unfortunately, the end result of her efforts isn't as admirable as her ambition. Wander is a derivative thriller that's predictable when it wants to be ambiguous, baffling when it wants to be shocking, and whose incompetent screenplay directly undermines its intent to humanize the plights of immigrants.