Quo Vadis, Aida? is not an easy watch but it is an essential one 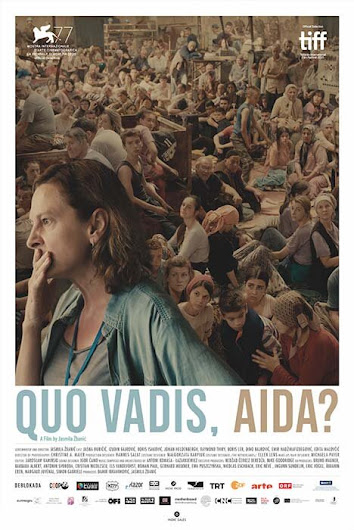 The characters in Quo Vadis, Aida? are standing on the precipice of the most horrific kind of history...they just don't know it yet.

This feature film from writer/director Jasmila Žbanić takes place just before the Srebrenica Massacre of 1995. These horrors are proceeded by the Serbian army invading and taking over the small town of Srebrenica. The residents of this town are now coming in by the thousands to try and get shelter in a United Nations camp. Here, Srebrenica resident and English translator Aida Selmanagić (Jasna Đuričić) tries to help cover the language barrier between the U.N. officials and the displaced locals of Srebrenica. At the same time, she's also trying to keep her husband and her two sons safe. That task will become more difficult as the Serbian army gets closer and closer to the U.N. camp while Selmanagić's pleases for the guaranteed safety of her loved ones falls on the deaf ears of U.N. officials.

From the start of Quo Vadis, Aida?, Žbanić and cinematographer Christine A. Maier make great use of crowds to accentuate the intensity of the scenario our lead characters are navigating. Wide shots of both the residents of the U.N. camp and the displaced citizens waiting outside the gates of this camp capture the enormity of this situation. Looking at these images, Žbanić conveys how devastating the invasion of Srebrenica has been without ever putting a corpse on-screen. The way Selmanagić's partner and children can easily get lost in the sea of people is a subtle but great touch that emphasizes how misery is not just confined to the Selmanagić family. They are just one of the countless stories of heartache occurring in these horrible times, why should the blocking emphasize them above all others?

Žbanić subtly but successfully establishes the world of Quo Vadis, Aida? as one of cramped crowds,. This makes the introduction of one secluded office area that Selmanagić's kids can hide in feel, appropriately, like something from another planet. All this space! So much leg room! Without resorting to a character spelling it out through dialogue, the visual language of Quo Vadis, Aida masterfully uses the presence, or lack thereof, of masses of people to suggest intensity. Even more impressively, the undercurrent associated with a lack of crowds effortlessly shifts from suggesting sanctuary to conveying imminent danger by the time the third act rolls around.

This is achieved by having the general camps, where previously there were people practically spilling out of the rafters, be suddenly empty as the Serbian army loads these people onto buses. The viewer has spent the majority of the runtime seeing this location exclusively in this kind of condition so to see it suddenly empty is eerie. The external influence that the main characters racing against the clock to find some kind of transportation that can take them all as a family only heightens the sense of despair accompanying the sudden discomforting presence of these crowds. Even as somebody who wasn't familiar with the Srebrenica Massacre of 1995 prior to watching Quo Vadis, Aida?, it becomes apparent, through the suddenly far emptier surroundings, that the movie is moving towards something tragic.

I truly can't compliment this visual detail in Quo Vadis, Aida? enough. The use of crowds and empty space accomplishes so many things (conveying the anguish of the displaced and establishing varying tones chiefly) without ever lapsing into being distractingly showy. Žbanić's command of the frame is at the service of emphasizing the horrors of real-world atrocities above all else. The same can be said for the film's lead performance courtesy of Jasna Đuričić. It's heartbreaking to watch Đuričić realize Aida Selmanagić's growing sense of despair that she might not be able to save the ones she loves from inevitable doom.

In the hands of Đuričić, the pain of major historical events is carefully distilled into the agony of one human being. Such agony takes on many forms, including subdued but no less haunting woe in the film's epilogue. That sequence is one of several ways Žbanić's screenplay takes a complicated look at how the lingering aftereffects of atrocities and how they're perpetrated. The latter phenomenon is reflected through quiet depictions of U.N. officials dismissing the concerns of Aida Selmanagić. Standing by in the face of atrocities is a key way the world ends up on the precipice of the most horrific kind of history. With Quo Vadis, Aida?, writer/director Jasmila Žbanić brings viewers to that precipice to view a tale as harrowing as it is outstandingly-realized on a filmmaking level.

Posted by Douglas Laman (NerdInTheBasement) at 9:29 AM