The Mitchells vs. The Machines delivers hysterical gags and creative animation 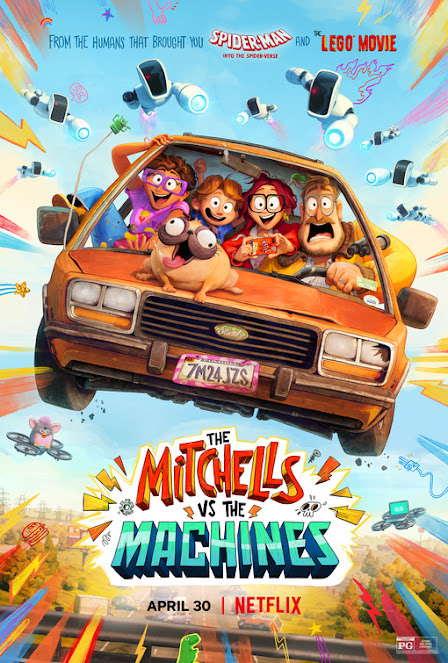 One of the many wonderful things about The Mitchells vs. the Machines is that its a kids movie that doesn't feel like it was tailor-made for my age range. Now, this is a kid-friendly feature that totally works for adult viewers. But it's not a live-action remake of an animated movie from my childhood or another similar property primarily aimed at mining my nostalgia while also being safe enough for a new crop of youngsters to see. The Mitchells vs. the Machines, meanwhile, feels like something made for today's youth. The rapid-fire pacing, the absurdist humor, the positive view of technology, it all feels a pace with adolescents in 2021. This is something that a new generation can call their own instead of being an echo of the past. Oh, and it's all so funny and well-made that anyone can drive enjoyment from it!

Kate Mitchell (Abbi Jacobson) is an aspiring filmmaker and impending college student. She loves her brother, Aaron (Mike Rianda), and her mom, Linda (Maya Rudolph), but shares friction with her dad, Rick (Danny McBride). They're just such polar opposites, Rick being an outdoorsy guy who sets traps for wildlife while Kate likes to edit wacky comedies in her bedroom adorned with a poster for Taxi Driver. To help mend their fractured relationship, Rick executes an impromptu family road trip to drop Kate off at her college. This already difficult journey is made even more treacherous when virtual assistant PAL (Olivia Coleman) takes over an army of robots and begins trapping all humans. Now the Mitchell family is the only thing standing between the Earth and a robot apocalypse. Gulp.

From the beginning, The Mitchells vs. The Machines embraces an "anything goes" attitude with its animation style. Largely told through computer animation, the film regularly employs hand-drawn animated enhancements to emphasize the emotions of the characters. Meanwhile, live-action imagery and footage are juxtaposed against an overtly cartoony world for the sake of some very memorable gags. There are even some sock puppets thrown in here for good measure, which, as Captain Underpants: The Very First Movie showed, are always welcome in any animated movie. The Mitchells vs. The Machines is bursting with too much imagination to be tied down to one visual medium.

The constant visual animations result in a barrage of memorable gags that feel totally unique from most there American animated kids fare. Even visual traits that aren't necessarily around to provide laughs prove impressive. I loved how the backgrounds largely looked like hand-painted watercolors while parts of the character designs, such as Rick's stubble, also look like they were drawn on. And the colors! Who knew the end of the world could look so pretty? Shots of turquoise-colored hordes of robots darting across a darkened sky are utterly gorgeous while even the evil lair of these robots is bursting with vivid hues.

The Mitchells vs. the Machines totally delivers as a visual experience and serves as a lovely reminder that Sony Pictures Animation won't just be restricting its bolder animation techniques to its animated Spider-Man movies.  The gags are similarly all-around successful, with the script by Jeff Rowe and Mike Rianda (the latter of whom directs) finding humor in well-timed visual gags or witty lines rather than dated pop culture references or toilet humor. Even the film's employment of Instagram, YouTube, or a familiar brand like Furby feels like organic ways to create humor rather than just grating produce placement.

This kind of delightful comedy is a byproduct of just how sharply written the screenplay is as a whole. Sure, some lines of dialogue related to the relationship between Katie and Rick are didactic, but that's more of an exception in the writing rather than the rule. More common in Rianda and Rowe's writing is smart ways to keep track of the distinct personality traits of the individual Mitchell family members even as the robotic apocalypse grows more and more chaotic. Plus, the film's approach to technology ends up being quite nuanced rather than just two hours of Boomers ranting about how kids and their phones and their gluten-free cupcakes are ruining society. What a nice change of pace!

Rianda and Rowe's script is brought to life through a wonderful collection of voice talent, including Danny McBride once again showing off his underappreciated range as a gruff dad with a heart of gold. You get folks like Abbi Jacobson and Olivia Coleman putting in delightful work for their respective characters plus a chunky pug named Monchi, voiced by Doug the Pug. The Mitchells vs. The Machines really does throw in everything and the kitchen sink. In less skilled hands,  that could've resulted in a movie that left you exhausted rather than thrilled. Luckily, this is a comedy with its jokes all charged up and ready to go. The result is a hysterical comedy that, like me with my phone screen, you won't be able to look away from.