In Laman's Terms: Where does the domestic box office go after Godzilla vs. Kong? 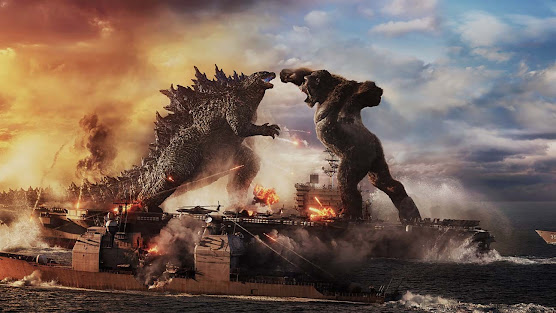 Much like the Backstreet Boys, the domestic box office, over the last weekend, came back.

Godzilla vs. Kong opened to an exceptional $48.5 million over its first five days of domestic release. It can't be stressed enough just how impressive that performance is. Over just five days, this blockbuster exceeded the lifetime domestic grosses of all but two movies that have opened since the pandemic started. It's guaranteed to cross $100 million domestically, the first time a domestic release will cross that mark since Sonic the Hedgehog in February 2020. It was surreal to see, an opening that could have come straight out of pre-pandemic times, and that was with Godzilla vs. Kong playing in over 1,000 fewer theaters than the average pre-pandemic blockbuster!

So what happens now?

It's an understandable question. The domestic box office was never built on just one title, it's always needed multiple titles to thrive. So it is with the 2021 domestic box office. The good news is that more major titles are on the way to movie theaters. Mortal Kombat arrives in two weeks while a new Guy Ritchie film, starring post-The Meg/Hobbs & Shaw Jason Statham debuts two weeks after that. Memorial Day weekend currently appears to be the frame where things really heat up at the box office. Both Cruella and A Quiet Place: Part II are not just set to open there, they've both already kicked off their renewed marketing campaigns. Right after that, a barrage of new releases will hit theaters as studios finally get to release their summer 2020 wares.

It's an exciting prospect to see unfold as someone who would gladly admit they prefer the theatrical experience to all other forms of consuming films. Streaming isn't inherently "lesser than", viewers who can only consume media at home due to medical, personal, or any other kind of reason are just as valid as any other viewer and there are certainly problems with the theatrical experience related to access to the disabled community. But on a personal level, I just love the movie theater for all films. Getting a chance to be cut off from the world for two hours and let a massive canvas for storytelling wash over me, it's like nothing else on the planet.

Well over a year of not being able to go to a theater regularly has only enhanced my intense desire to go back to a theater rather than diminish it. I've been able to catch up on a lot of great filmmaking thanks to streaming during the pandemic, don't get me wrong. But months of having to deal with clumsy Wi-Fi, buffering issues, the lack of pre-1990s cinema on the majority of streaming services, all of that has reminded me that a novel way to appreciate films at home is not a replacement for the idiosyncratic theatrical experience. Judging by those Godzilla vs. Kong numbers, it appears I'm not alone in that feeling.

Of course, the domestic box office isn't out of the woods yet even with one successful opening, though, the good news is, it's definitely gotten over one major hurdle. After all, if Godzilla vs. Kong is a hit, imagine what the new Fast & Furious or Marvel movies will do in a couple month's time. However, there's totally the possibility of Godzilla vs. Kong being a fluke while there's also the issue of studios like Disney refusing to fully commit to the theatrical experience. It's bad enough Disney insisted on cruel terms to theaters for showing their movies before the pandemic but now they're just randomly dumping PIXAR movies like Luca onto Disney+? What a knife to the heart.

(For the record, I'm actually not opposed to Disney offering Cruella and Black Widow as PVOD titles on Disney+. We're still in a pandemic, not everyone around the world has access to vaccines or feels safe about to going a theater. Giving viewers the option to watch those films either at home or in a theater makes sense. But just shoving Luca to Disney+ only? That doesn't help anyone. Not theatrical exhibition employees who need new films, not customers who are deprived of options, and not the hundreds of artists who worked on Luca for 4-5 years and deserve to have their work seen on the big screen.)

While many movie studios are more concerned with filling out the pockets of their richest employees than helping the theatrical exhibition industry, the success of Godzilla vs. Kong, as well as several foreign-language titles like Demon Slayer: Kimetsu no Yaiba the Movie: Mugen Train, shows that the theatrical experience is alive and well. It's a phenomenon that's existed for over a century and it's no surprise that, so far, it doesn't look like a pandemic has wiped out this form of communally watching art. I'm hopeful for the future as well as for the idea that Godzilla vs. Kong's box office is no fluke but rather a harbinger of even better days to come.

Posted by Douglas Laman (NerdInTheBasement) at 11:52 AM