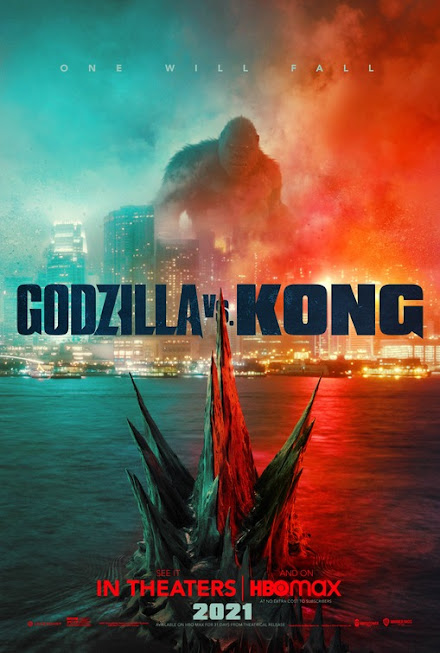 "Godzilla is out there hurting people and we don't know why!"

With that line from Kyle Chandler, the stakes at the start of Godzilla vs. Kong are established. After this big lizard attacks Florida, human beings everywhere are terrified. What could possibly stop this beast? If you're thinking the mighty Kong...not exactly. Dr. Nathan Lind (Alexander Skarsgard), who must always put on heavy jackets and vests to conceal the fact that he the physique of Alexander Skarsgard, has a version of the Hollow Earth theory that proposes that extremely valuable substances are in the core of the planet. If the company Apex Cybernetics can retrieve that material, they can use it to fight Godzilla. The only one who can help human beings get to the center of the Earth, though, is Kong. Using this primate as a tour guide will be difficult, though, since he and Godzilla are in constant war with one another.

Godzilla vs. Kong is made in the mold of G.I. Joe: The Rise of Cobra and Aquaman in terms of seemingly being crafted by a bunch of eight-year-olds smashing toys together after ingesting several Pixie Sticks. That feels like the right approach for this project, which keeps things lean and mean at under two hours. You want the monkey and the lizard to fight? Here you go. You also want an inexplicable remake of The Core? We'll do that too! Do you also want a mostly generic band of humans? No? Well, the MonsterVerse still insists there be way too many humans around, so you're gonna get them as an add-on.

Basically, I got what I came for here and while Godzilla vs. Kong doesn't supersede its trashy roots to become something special like Pacific Rim, it does manage to work well in its own parameters. Much of this due to director Adam Wingard's welcome ability to embrace both silliness and visual splendor. The guy who made such gnarly use of a blender in You're Next turns out to have a lot of endearing imagination when you hand him a couple of Kaiju. I especially appreciate how everything dealing with Hollow Earth ends up taking visual cues from everything from 2001: A Space Odyssey to the flying cars from Blade Runner to landscapes straight out of 1970s hair metal album covers.

Whenever the titular beasts fight, Wingard also shows a welcome tendency to let these fights play out in big wide shots with cogent editing and, best of all, with no visual intrusions obscuring the showdowns. Instead of taking a cue from Godzilla: King of the Monsters and covering everything in a barrage of rain, snow, and soot, Godzilla and Kong duke it out in broad daylight. You can see every inch of their scrapes and that makes it a lot more fun to watch. Even better, Wingard comes up with fun backdrops for the two to have their scuffles in. Rather than just having them fight it out in generic CG screensavers, the ocean and Hong Kong provide interesting challenges and advantages to each of the Titans.

Though Godzilla vs. Kong is outright lunacy in some parts (including how exactly Godzilla reunites with Kong in the third act), I did appreciate how screenwriters Eric Pearson and Max Borenstein took the time for some surprisingly affecting quiet moments between Kong and a young deaf girl by the name of Jia (Kaylee Hottle). Their largely quiet interactions provide a welcome contrast to the bang-bang-boom aesthetic of the rest of the movie. Plus, the friendship between Jia and Kong is the first time the human/monster dynamics in these MonsterVerse movies actually feel earned and interesting. Humans actually engaging with the beasts instead of being generic spectators? What a concept!

The rest of the humans are rudimentary at best, but at least they're in the mold of Kong: Skull Island's humans in being inoffensive broad archetypes rather than the grating quip machines of Godzilla: King of the Monsters. I will say, though, that I found it ironic that this movie features so many live-action humans yet 99% of them still aren't as compelling as the entirely CG Kong. I also wondered if Nathan Lind and fellow failed author in a disaster movie Jackson Curtis (John Cusack) ever swap unsold copies of their respective books? I'm also glad Rebecca Hall got to have a prominent role in a major American movie and didn't have to be a love interest, even if I couldn't describe her character's personality if you put a gun to my head.

Oh! Hey! Millie Bobby Brown is back! She's back from King of the Monsters as Madison Russell. Her whole storyline concerns her and classmate Josh (Julian Dennison) teaming up with podcast conspiracy theorist Bernie Hayes (Brian Tyree Henry) to investigate shady activity from Apex Cybernetics. This subplot is pretty much superfluous given how detached it is from the monster action and how it's hard to create a suspenseful conspiracy storyline when the villains are so obvious from the get-go. At least Henry remains a compelling person to watch. Plus, they don't take up too much of the screentime.

Godzilla vs. Kong knows where its bread is buttered and it's certainly not with human beings like Madison Russell and company. Godzilla vs. Kong is, to paraphrase Brad Pitt in Inglourious Basterds, "in the monster fighting business, and cousin, business is a-boomin'!" What the film aims to do (provide monster mashes that will delight your inner and not-so-inner eight-year-old), it does with aplomb. I smiled, I had fun, I even clapped with glee at some of the more ludicrous bits of action. Much like Kong: Skull Island and Rampage, Godzilla vs. Kong realizes that a lot can be forgiven in a movie when you've got an endearing ape punching things.

Posted by Douglas Laman (NerdInTheBasement) at 9:56 AM