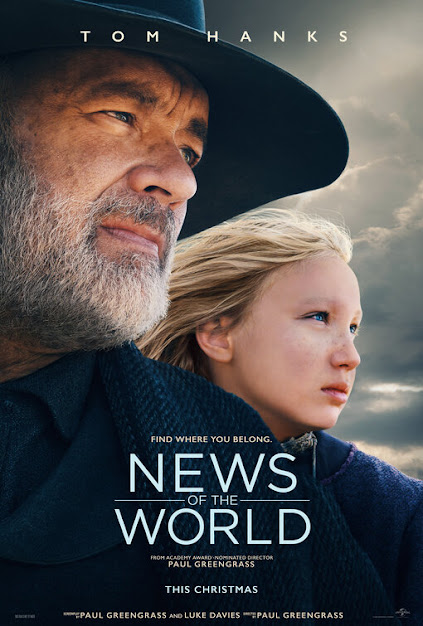 I wouldn't call Paul Greengrass a filmmaker preoccupied with the past. His movies tend to be rooted in the here-and-now. His Bourne sequels tapped into post-9/11 paranoia about who we could trust, he made one of the first movies about the United 93 flight in 2006 and Green Zone was trying to be a ripped-from-the-headlines thriller about the Iraq War. Yet, for his newest film News of the World, Greengrass has gone back in time to right after the Civil War to create a Western that's more John Ford than Jason Bourne. Surprisingly, the shift in aesthetic works nicely for him and creates an unexpectedly moving motion picture.Captain Jefferson Kyle Kidd (Tom Hanks) makes a living reading news to the public. He travels from one Texas town to the next and will read aloud from newspapers about what's happening across this nation. While he espouses the importance of looking outward to others, Kidd himself is outrunning a tormented past and living his life only looking forward. His whole style of living is upended when he came upon Johanna Leonberger (Helena Zegel). Recently orphaned, there's nobody that can take her to only living relatives. Nobody, that is, except, Kidd. Now, this unlikely duo are traveling across Texas and challenging each other's perceptions of the greater world.

News of the World is like if Greengrass and co-screenwriter Luke Davies set out to make a Hays Code-era Western but one with more naturalistic acting and a touch of political relevance. Executing this concept with total sincerity serves the entire production seriously. Rather than wrap the story in a jaded postmodern aesthetic in an attempt to appeal to modern audiences, News of the World wears its heart on its sleeve in terms of its belief that people can come together in even the most tumultuous of times. An old-fashion notion? Perhaps. But when it's done with this level of polish and heart, you really can't complain.

A scene of Kidd slowly winning over an isolated Texas town with the story of Pennsylvanian coal miners who survived a collapsing mine shaft, for instance, totally captures your affection. It's all executed so nicely, from the performance of Hanks to the slow-burn way Greengrass presents the townsfolk coming around to this story. Even the lighting of this nighttime sequence by way of torches shows thoughtfulness. This lighting device initially suggests danger before taking on a quasi-cozy quality as Kidd's yarn engrossed the crowd. On paper, it may sound cornball, but when executed with this level of skill, News of the World makes you believe in the power of stories.

It helps that Davies and Greengrass don't eschew looking at the darker sides of post-Civil War Texas. This is particularly evident in a third-act scene involving Kidd returning to a familiar location under tragic circumstances. This visit just guts you with how understated everyone, including Hanks and James Newton Howard's score, plays things. It's a quiet but effective element that reflects how turmoil is so widespread here that it's become normalized. Tragedy now inspires one's shell to further harden, not extreme expressions of emotions. With these darker qualities cemented, News of the World can make its scenes of refreshingly old-fashion hope feel all the more vital and welcome.

Not all the old-fashion approaches in News of the World work as well as they should, with indigenous characters especially getting disappointingly treated as "others". An old-school tone isn't a bad idea but did we have to inherit these problematic stereotypes? On the other hand, this kind of aesthetic does prove to be a boon for the two lead performances. Hanks has become a modern-day master of what's been affectionately coined "grandpa movies", but when he's this good in them, I say bring on the "grandpa movies"! Here in News of the World, I love how Hanks uses his genial public persona so well in the segments where Kidd reads aloud from newspapers.

Additionally, Hanks reaches into his own range as a performer to lend equal levels of believability to the intimate scenes where his character tries to navigate a world fraught with peril. It's a complex turn that reaffirms how Hanks really is as good as his reputation suggests. Playing opposite Hanks for much of the movie is Helena Zegler. The few of us who saw System Crasher last year know how good Zegler is as a performer and her fearless qualities as an actor serve this part well. In the hands of Zegler, Joanna feels like an authentic rendering of a youngster, not a cutesy prop to help guide down Kidd a character arc. She and Hanks both lend to their respective roles the kind of humanity that marked the best of Paul Greengrass's modern-day dramas. Paul Greengrass deviates from his standard style of storytelling for News of the World and the result is something that can't help but capture your heart.

P.S. One shot in a pivotal third-act emotional scene of News of the World uses a sudden zoom-in from a handheld camera, a visual motif in earlier Paul Greengrass movies. Here, though, I found myself amused by the out-of-nowhere presence of this Greengrass staple. Did Greengrass realize at the last minute he hadn't incorporated this shot anywhere in the runtime and decided to find a spot, any spot, for it?