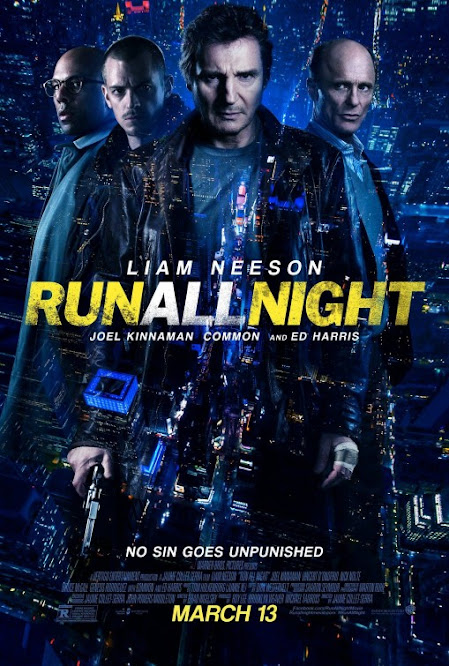 Having done seemingly dozens of these action movies since Taken took off like a shot in 2009, Liam Neeson's action filmography actually has a better track record than you'd expect. All three Taken movies are trash, but The A-Team, The Commuter, Non-Stop, I enjoyed all of those movies to varying degrees. It's also worth noting that The Grey and Cold Pursuit both received good marks from critics. Part of this above-average track record is through Neeson working with talented filmmakers like director Jaume Collet-Serra. One of their three collaborations is the surprisingly solid 2015 thriller Run All Night.

Former mob enforcer Jimmy "The Gravedigger" Conlon (Liam Neeson) is filled with regret over his past. His biggest lament lies in how his son, Mike (Joel Kinnaman), won't even acknowledge he exists anymore, let alone speak to him. Nowadays, Jimmy takes to drinking away his sorrows while getting help from his buddy and gangster Shawn Maguire (Ed Harris). However, one night, Mike inadvertently sees Maguire's son kill somebody. Just as Mike's about to be shot, Jimmy shoots and kills Maguire's son. Now, Mike and Jimmy both have a bounty on their head from a vengeful Maguire. Embroiled in a world of crooks he never wanted to be a part of., Mike will have to keep moving and listen to his dad if he wants a chance to survive.

Screenwriter Brad Ingelsby spends a welcome amount of time in Run All Night establishing the imperfect worlds each of our characters inhabits. In particular, the film lingers on how Conlon is not the kind of wish-fulfillment figure for 60+ year old dudes that Neeson normally plays in these movies. Conlon is a drunken mess who harasses women and makes off-the-cuff racist remarks. He's simultaneously haunted by his past but too frozen to do anything to make his future better. That complicated form of regret is an emotion Neeson handles quite well. The layers of believability he imbues into this side of Conlon immediately help give the project some decent gravitas.

It's also nice that both Ingelsby's script and the chemistry between Neeson & Harris help to sell the idea that there's a long-term friendship between Conlon and Maguire. These aren't two characters who seem destined to be adversaries the moment they start interacting. Instead, there seems to be a genuine affection here that gets steamrolled once Maguire's quiet but no less passionate desire for vengeance enters the picture. Once his quest for revenge begins, Run All Night begins to deliver all the action Taken fans came to this movie for in the first place. The violence-filled set pieces include a big car chase, a hotel shoot-out in the dark, and a fantastic finale in the wilderness.

An early chase scene that's hampered by terrible janky editing had me worried the rest of Run All Night was about to deliver set pieces as visually coherent as that infamous fence-jumping scene in Taken 3. Luckily, the editing calms down once the story kicks it into high gear and the viewer can appreciate the more imaginative flourishes helping to make Run All Night a memorable acting outing. I especially loved the bombastic touches in the big climax that feel totally earned. You emit gasps and cheers in just the right moments because you've organically become invested in these characters and not through cheap manipulation.

Run All Night is definitely far from a perfect movie. In addition to strange editing choices in the first choice, there's also the clumsy recurring motif of the camera traveling across New York City through what appears to be Google Earth. This is meant to make traveling from one character's story to another more organic, but in execution, it doesn't work at all. Overall, though, Run All Night surprised me in how well it works. It delivers the action you want, the characters are more complex than you'd expect, a talented cast gets to work with actually interesting material. Out of all the action/thrillers Liam Neeson starred in post-Taken, Run All Night might be one of his very best.