Without Remorse is a movie without much excitement 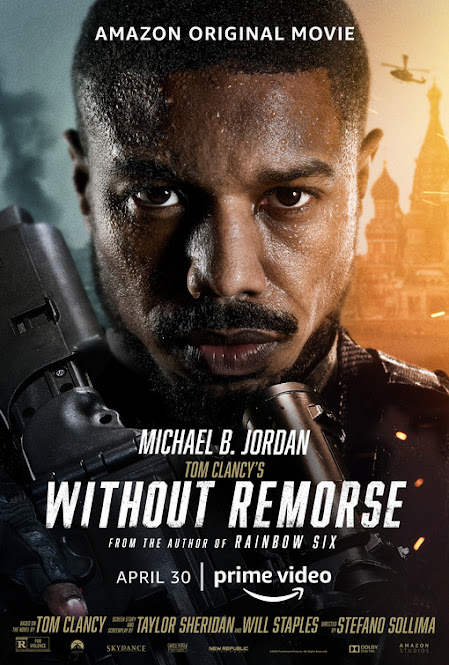 One of my favorite things in movies is when a secret bad guy reveals their hidden wickedness by inadvertently revealing some piece of information they weren't supposed to know. My go-to example of this is in Minority Report when Max von Sydow's Lamar Burgess mentions that he'll look for files "on anyone who drowned" only for Tom Cruise's wife to reply "I didn't say she drowned". It's always so exciting, God, it gets me every time!

It's a testament to the incompetence of Without Remorse that it tries to do the same thing in its climax but it couldn't even get a slight smile out of me. The screenplay by Taylor Sheridan and Will Staples totally fumbles this moment, suffocating it under an avalanche of unnecessary dialogue explaining the significance of this moment. The elegant simplicity is what makes this kind of reveal work! It's not the only instance of Without Remorse screwing up something that should be a no-brainer to pull off.

Based on the novel of the same name by Tom Clancy, Without Remorse is about John Kelly (Michael B. Jordan), a soldier whose planning to get out of military life and settle down with his pregnant wife. However, one night, he's attacked in his home, which results in the death of his partner. Kelly is now determined to get answers about who tried to kill him and why by any means necessary. He eventually gets his chance to take on the people responsible for murdering his family by teaming up on a mission into Russia with Karen Greer (Jodie Turner-Smith). However, in a shocking twist for the action thriller genre, not everything is as it seems and Kelly finds himself in the middle of a much broader conspiracy than he initially realized.

Without Remorse is part of my least favorite modern-day subgenre: the feature-length prologue. Following in the footsteps of Mortal Kombat and Artemis Fowl, Without Remorse spends its entire screentime being an origin story for adventures audiences actually want to see. Come back in two years and maybe you'll get a sequel that actually stands on its own as its own movie. This is the kind of stuff 1970s TV dramas like The Incredible Hulk would glide through in a montage during the theme song. Here in Without Remorse, it's the whole movie. Must I break out Patton Oswalt declaring that "I don't care where the stuff I love comes from" again?

This dramatically inert story suffers from a whole lot of other problems beyond just being a prologue stretched onward for two hours. For one thing, Without Remorse opts to not give John Kelly a big concrete villain to fight. Instead, there's a vague threat of "Russian enemies" that killed his family and the possibility of traitors in his own inner circle. For the majority of the runtime, Kelly just fights disposable goons and threatens high-level government officials who could never actually take him on in a fight. This erases the tension in any of the fight scenes while the absence of a defined antagonist also reduces the excitement of the narrative.

The ambiguity surrounding the villains could have worked in a properly constructed mystery thriller but Sheridan and Staples simply do not deliver that movie. It's easy to guess who's actually good and whose actually bad given how broadly the supporting players are written.  The script also fails to give us any actually engaging characters to follow, a critical ingredient in any halfway decent entry in this genre. Worse, director Stefano Sollima realizes this screenplay in an abrasively unappealing way. Without Remorse has a tone as dark as its various dimly-lit locations and nothing in the story justifies all the gloominess.

Aside from an early moment where a guy gets run over by a car in a cartoonish way that evokes the I Like Trains kid more than anything else, the gloominess doesn't even result in unintentional humor. Without Remorse is all so dry and derivative that it never approaches being camp. Extended action scenes where people shoot guns at each other in generic locations eventually blend together and inspire tedium. The only remotely memorable set piece involves a crashed plane, otherwise, Without Remorse can't even offer up compelling action, the one element it absolutely had to get right. The only redeeming part of this whole affair is the two lead actors, Jordan and Smith. Both are way too good for this material. Michael B. Jordan especially renders the pain of John Kelly in such a vivid and raw manner that's actually quite moving but feels totally out of place here. Why is Jordan delivering such a distinctly human performance in Without Remorse, a movie so incompetent it can't even properly execute a secret bad guy inadvertently telling on himself?