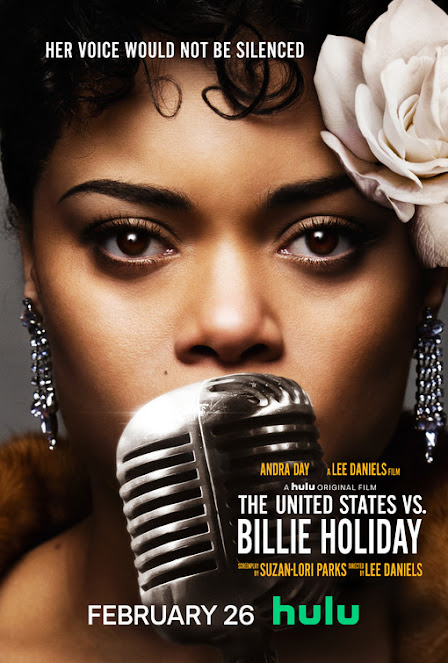 There comes a moment in every bad movie when you realize you're watching a bad movie. When it comes to The United States vs. Billie Holiday, that epiphany came in its opening minutes. Suzan-Lori Parks kicks off her screenplay on a genuinely provocative touch, as on-screen text informs the viewer of how anti-lynching legislation failed to gain traction in the U.S. government. This plays over an image of the aftermath of a lynching. It's the cinematic equivalent of a gauntlet being thrown down and director Lee Daniels executes it nicely. Unfortunately, the movie doesn't begin from there. Instead, we get two more false starts before Billie Holiday decides to finally kick things into gear.

Following up an effectively stirring opening with a succession of two further opening sequences set the tone for the messy narrative to follow. Brace yourselves folks. The United States vs. Billie Holiday is not good. At least it's the kind of bad movie that's interesting to unpack and tries stuff, though, compared to a limp nothing of a feature like Hillbilly Elegy.

For the handful of you unaware, Billie Holiday (here portrayed by Andra Day) is one of the most famous jazz singers of the 20th-century. Many of her songs touched a nerve with the general public, but one in particular, Strange Fruit, a tune about lynching, drew the worst kind of attention. The FBI, and particularly Harry J. Aslinger (Garret Hedlund), want Holiday and her provocative music shut down. From there, the FBI becomes a regular presence in Holiday's life, hammering her hard and exploiting her struggles with addiction to try and tear her down. An undercover agent by the name of Jimmy Fletcher (Trevante Rhodes) becomes an especially prominent figure in her life as both an adversary and a lover.

Noble Prize-winning writer Suzan-Lori Parks has penned many acclaimed and fascinating pieces in her career. Unfortunately, the script for The United States vs. Billie Holiday is one of her weakest works. Tragically, the writing falls prey to a classic biopic flaw: trying to pack too many historical events into one movie. This feature flies right by years of Holiday's life and we never get to fully appreciate how this singer evolves over time. Parks' writing is in such a hurry to get to the next big event that it never finds the time to breathe or to establish Holiday as a human being. Despite a 128-minute runtime, I walked away from this movie having garnered little in the way of insight into what made Holiday tick.

The script also has a terrible habit of holding the audience's hand to an irritating degree. For instance, dialogue that practically pounds you in the ribs in alerting you what a character's thinking abound. As if the shallow characterizations weren't enough to render this movie's characters hollow, that kind of dialogue will do the trick. Meanwhile, the emphasis Parks places on lingering almost exclusively on the suffering of Billie Holiday allows director Lee Daniels to indulge in an avalanche of melodrama. The right filmmaker (think Douglas Sirk) can make melodrama compelling. Unfortunately, in the context of The United States v. Billie Holiday, Daniels doesn't have the touch to make this kind of material work.

A big issue is that the flat visual sensibilities of Daniels' direction undercut the big emotions he wants to depict on-screen. The script is calling for characters to unleash floods of passionate feelings, but Daniels keeps staging and executing things in incredibly stilted terms. An early scene where Holiday strips naked in response to a police team invading her house could be a memorable dramatic moment if Daniels didn't choose to capture it at an awkward camera-angle. As a result of decisions like this, the already flawed script gets further undercut while the visuals on-screen inspire tedium. Basically, the writing and the bland direction in The United States v. Billie Holiday are at war with each other. The ultimate loser in that conflict is the viewer.

Daniels also has a bad habit of incorporating period-era visual details briefly but never doing anything with them, like a late scene of Holiday getting arrested that's presented in a higher frame rate. Credit to Daniels for trying something different, but the execution of this and other similar elements (like brief transition sequences between time periods that employ black-and-white coloring and a different aspect ratio) are incredibly flawed and, worst of all, simply don't add much.

On a better note regarding the productions visual qualities, costume designer Paolo Nieddu delivers a number of lovely-looking outfits with memorable designs for Holiday to adorn while performing her tunes. Similarly doing their best under these circumstances is Andra Day in the lead role of Holiday. The best moments of her performance suggest a more insightful take on Billie Holiday than this movie can handle. Day, some nice costumes and the incredible smile of Trevante Rhodes aren't enough to salvage a movie. My early intuition was right. The United States v. Billie Holiday is indeed a bad movie.

Posted by Douglas Laman (NerdInTheBasement) at 9:51 AM