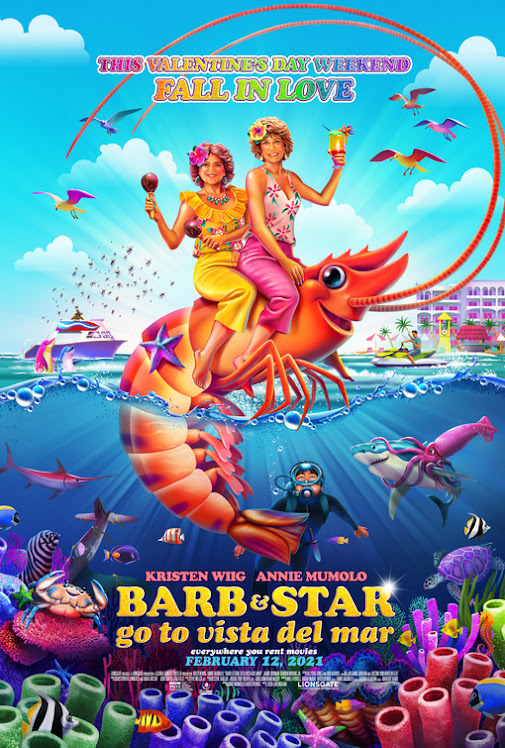 Sometimes, you can immediately tell when you're in good hands with a movie. Such was the case with Barb & Star Go to Vista del Mar, a new comedy starring Kristen Wiig and Annie Mumolo. After a prologue scene introducing the film's villain, the opening chords of Man! I Feel Like A Woman by Shania Twain begins and we cut to...close-up shots of Barb & Star moving their hands and feet in mundane ways. The juxtaposition is immediately hilarious and deftly introduces viewers to the kind of humor the ensuing movie will be bathed in. Plus, we get to hear Man! I Feel Like A Woman, that's never a bad thing!

Barb (Annie Mumolo) and Star (Kristen Wiig) are best friends who work at a furniture store and live a quiet safe life. In the wake of their individual heartbreaks, they just have no inclination to rock the boat. But the prospect of a trip to Vista del Mar in Florida inspires both of them to break out of their routines and finally have some fun. Unfortunately, this trip coincides with evil supervillain Sharon Gordon Fisherman (also Kristen Wiig) planning to unleash a swam of deadly mosquitoes on Vista del Mar as revenge against this sunny locale. Barb and Star are about to get caught in the middle of this plot, especially once they both develop a fondness for Fisherman's loyal henchman Edgar (Jamie Dornan).

It's fitting that Josh Robert Thompson makes a voice-over cameo in this movie given that Barb & Star Go to Vista del Mar does channel the anything goes wacky vibes of The Late Late Show with Craig Ferguson. Its comedy also has more than a few shades of Lonely Island, The Muppets, and Emperor's New Groove thrown in, all of which should be seen as a compliment. This is one wacky as heck comedy but the best kind of wacky comedy, the kind that understands that just because you're making something zany doesn't mean you need to sacrifice quality in the name of humor. This is well-constructed comedic preposterousness, in other words.

And boy howdy, is it ever funny. The adherence to rampant silliness means you never know what Barb & Star is going to throw at you. A crab can just start talking at any moment while Damon Wayans Jr. can similarly emerge at any given time. The best gag to come out of this spontaneity is a musical sequence entitled Edgar's Lament, in which Dornan's Edgar gets his own Bet On It number in which he dramatically expresses his romantic woes. It's so over-the-top and ridiculous complete with stupid yet brilliant lyrics ("Like a cat climbing up a palm tree!") and Dornan's 110% committed performance. Who knew he had this kind of acting in him?

At the heart of all this is Wiig and Mumolo's performance as the two titular characters. It's easy to see a version of this movie where Barb & Starr end up being Saturday Night Live characters who can't sustain a whole movie. But the obvious affection Wiig and Mumolo have for these characters ensures they can headline a longer-form story. These two characters are goofy but Barb & Starr are two people we're supposed to like and root for, we're not supposed to mock. This affectionate quality is paired up with how the two performers are just so darn funny in these roles. The natural way they sell the most absurd lines of dialogue is especially funny.

A talented cast is set against some glorious-looking production design. Director Josh Greenbaum populates this version of Vista del Mar with so many bright colors that are ultra-pleasing to the eye while the costumes are similarly fantastic. So many modern American comedies can barely muster up the energy to look better than your average CBS sitcom, so it's wonderful to see that Barb & Star Go To Vista del Mar actually looks like a movie! It's a glorious-looking affair that dazzles the eyeballs while the gags constantly tickle your funny bone. Pack your bags folks, Barb & Star Go To Vista del Mar is a vacation you do not want to miss!

Posted by Douglas Laman (NerdInTheBasement) at 11:25 AM