In The Mood For Thoughtful Horror? Then Check Out His House 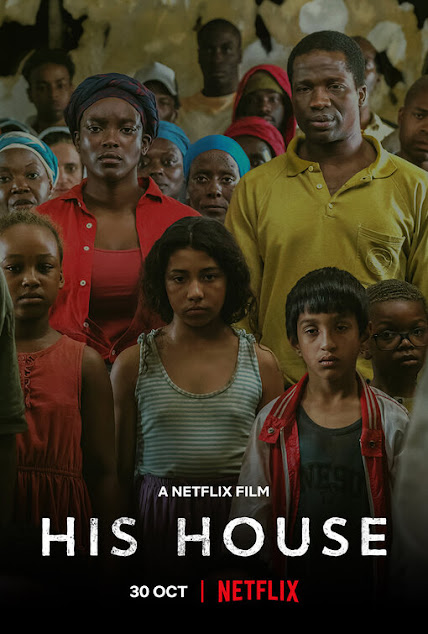 Bol (Sope Dirisu) and Rial (Wunmi Mosaku) have gone through a lot. They've managed to escape from South Sudan, but in their travels, they lost their daughter. Now in Britain, Bol and Rial are granted asylum in the country. However, their living conditions are far from ideal. Their new home is filled with roaches and peeling paint. Worse, they're surrounded by neighbors who see their very presence as an affront to their existence. Oh, and then there's the problem of the ghost. This house has some kind of spiritual being known as an apeth that is now tormenting Bol and Rial. What does it want? To figure that out, Bol will have to confront the past he so desperately wants to forget about.

It's a total cliche to say this when reviewing horror movies, but His House really is impressive on how well it functions as both a grounded drama and a horror movie. Bol and Rial's circumstances are rooted in very tangible experiences related to asylum seekers and immigrants. The apeth is creepy, yes, but just as overwhelming is trying to go about your day-to-day existence while your neighbors resent your very presence. A sequence of Rial trying to ask for directions from her neighbors is framed and shot like any horror movie and why wouldn't it be? Going in this direction renders the difficulty of the challenges she's facing so palpable.

Simultaneously, writer/director Remi Weekes doesn't shy away from the fact that His House is a horror movie. So many "elevated horror" movies (oh, what a wretched term that is) eschew any stylized elements in favor of telling a "serious" story. His House, meanwhile, rolls its sleeves up and delivers both intimate human drama and supernatural scares. When Bol is searching frantically for the figure in his home, Weekes doesn't shy away from having Bol engaging in some super freaky encounters. Particularly overwhelming is a scene of Bol being overwhelmed by figures who hold a knife to his throat! It's a sequence so far out of reality yet its heightened nature allows it to reflect the extreme internal emotions of the characters.

This balance of the outlandish and the grounded is especially apparent in any of the evocative fantasy sequences taking place in Bol and Rial's minds. Bol being out in the middle of the water against an orange sky is such a stirring image detached from any context. However, it proves especially overwhelming when attached to Bol's personal struggles. Similarly memorable is a confrontation between Bol and the apeth that's set against an entirely black backdrop, with only a small fire providing fire. Weekes keeps dropping such imaginative and freaky imagery throughout His House. All the while he makes us more comfortable with the psychology of our two protagonists. It's a truly outstanding feat!

The richly human nature of His House is further reflected in the movie's lead performances. Sope Dirisu especially proves impressive in how he handles the complexities of Bol as a character. Sometimes, Dirisu breaks your heart with how he conveys Bol's pain. Other times, sometimes in the very same scene, he can effectively make Bol seem like more of a threat to Rial than the apeth! It's a performance packed with layers and the same compliment can be paid for Wunmi Mosaku's well-realized turn as Rial. Mosaku especially proves great in an extended flashback where she reunites old friends from her days in South Sudan.

Mosaku and Dirisu's performances encapsulate the thoughtful nature of His House. Even when the third-act arrives and things get truly out-of-control, neither these performers nor His House as a movie forgot those grounded human elements that got one so captivated in the first place. His House strikes a mesmerizing balance between the freaky and the contemplative. What an impressive feat for Remi Weekes in his directorial debut. I'll be totally curious to see what else he makes in the future. For now, though, His House is great. Here we have a totally eerie horror movie that also works as a potent exploration of how traumas of the past reverberate well into the present.

His House is now streaming on Netflix.