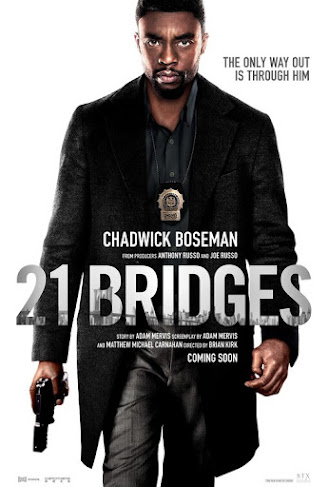 And here we have another movie whose target audience I can't really discern. 21 Bridges is clearly aiming to be a mid-budget action/thriller for grown-ups, something along the lines of a Tony Scott picture. That's not a bad idea, especially since Scott was a great filmmaker. But the final film is way too grim and lacking in "bad-ass" action moments to appeal to people just wanting to watch things go boom. Meanwhile, it's all too flatly-directed and thinly-written to transcend its ambitions and become something weightier. 21 Bridges is rarely outright bad but it's another one of those movies that merely keeps reminding you of superior films you could be watching instead.

Andre Davis (Chadwick Boseman) lost his police officer dad to three violent criminals. That loss has stuck with him all his life to the point that he's now a New York City police officer with a penchant for killing criminals rather than taking them in. One night, a cocaine robbery gone awry has led to the deaths of a number of cops. Davis is partnered up with narcotics detective Frankie Burns (Sienna Miller) to take down the two people responsible for the deaths. The duo turns out to be small-time crooks Michael Trujillo (Stephan James) and Ray Jackson (Taylor Kitsch), who begin to believe that something bigger is going on around here. Davis also begins to suspect the same thing in an adventure that will end up challenging Davis' perceptions of the world.

If there's anything that really sinks 21 Bridges, it's the direction from filmmaker Brian Kirk. Making his feature film directorial debut, Kirk directs 21 Bridges, particularly its earliest scenes, with so little imagination or energy. Everything's so flatly shot that it's hard to generate any sense of suspense. Where's the sense of propulsion in this crime thriller? Such lacking staging is told in an array of dimly-lit sets that are trying so very hard to convey a "mature" aesthetic but just make one wanna fall asleep. All these big-name actors are on-screen but they're all surrounded by visuals that seem more fitting for a TV cop drama.

The action scenes, too, tend to be on the forgettable side. A barrage of shoot-outs and car chases are the name of the game for the set pieces in 21 Bridges. Props for going all-in on an R-rating here with some gruesome deaths that avoid CGI blood, thus maintaining the tactility of the whole project. Still, little of the action leaves much of an impact. Partially that's due to the visual sensibilities of Kirk but it's also on the screenplay by Adam Mervis and Matthew Michael Carnahan. The characters tend to get lost in the mayhem of 21 Bridges, with Davis' primary character traits especially becoming an afterthought once the bullets start flying. Plus, Mervis and Carnahan telegraph the inevitable third-act twist of who's the real villain is way too far in advance, further sucking the suspense out of the production.

If there is a saving grace here, it's the casting. Rather than getting D-list action stars with no emotion to headline 21 Bridges, Chadwich Boseman and Stephan James are our leading men. A scene of them just talking while holding each other at gunpoint proves to be the one truly compelling sequence in the whole movie. Finally, convoluted exposition and generic action have taken a backseat. Now two talented performers have taken the reins of 21 Bridges and they suck you in. James especially channels his incredible If Beale Street Could Talk turn and lends such captivating desperation to Trujillo trying to convince Davis that a larger conspiracy is at work here.

If nothing else, let 21 Bridges be a sterling showcase for the talents of these two actors. Such talents are a lot more noticeable once the third act gets underway. Now the plot for 21 Bridges no longer needs to hide behind a shroud of mystery. With everything a lot more clear, the actors have more to work with and things do come a bit more alive. Still, 21 Bridges, though it has its moments, never fully coalesces into something that works. It neither successfully evokes the older movies that inspired it nor does it become its own engaging creation.

Posted by Douglas Laman (NerdInTheBasement) at 10:30 AM