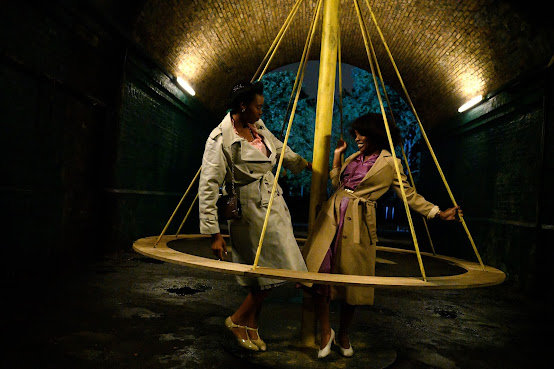 For most of his directorial career, Steve McQueen has been known as a filmmaker who handles dark material. This is no oversimplification but rather an observation on the kind of stories McQueen has explored. A hunger strike in Hunger, sex addiction in Shame, being a slave in 12 Years a Slave and a tapestry of different forms of systemic modern hardship in Widows. McQueen's proved plenty adept at unearthing harrowing tales out of these topics but he goes in a different tonal direction for the second installment of his Small Axe collection entitled Lovers Rock. Here, McQueen does utter euphoria. This is 73 minutes of joy and it's a wonder to behold.

Lovers Rock is a hangout film in the vein of any classic Richard Linklater project like Slacker or Dazed & Confused. It chronicles a house party and all the dancing, singing and joy felt at this gathering. We mostly see this event through the eyes of Martha (Amarah-Jae St. Aubyn), who comes to the party with her friend Patty (Shaniqua Okwok) in a glistening dress and an urge to dance the night away. Her paths eventually cross with fellow partygoer Franklyn (Micheal Ward), a charismatic guy who sweeps her up off her feet. We also get to see just how involved all the party guests get into the music, culminating in a final sequence where you can practically feel the energy of the room coming off the screen.

Said sequence was apparently totally improvised on the part of the actors, which is incredible to process. It's such an intricate scene, everybody in each layer of the show is engaging in their own unique activity. It's the kind of thing you'd presume would have to be intricately choreographed but apparently come out of the actors in Lover Rock organically. That was an intriguing revelation to discover since the scene reminded me of the most chaotic scenes in Gaspar Noe's Climax, which also saw dancers improvising their movements onscreen. Whereas Climax used that trait to convey madness, Lovers Rock uses it to convey a sense of unity and charged-up enthusiasm.

Some of the most powerful moments in Lovers Rock are just like this improvised sequence, involving numerous actors on the dance floor. However, the project proves just as powerful in more intimate sequences. Take Martha's brief foray outside, where she encounters a gaggle of racist white guy. McQueen doesn't just effectively put us into Martha's headspace here. He also immediately and subtly conveys why events like the house party at the heart of Lovers Rock are needed. The outside world is one built on hatred towards the guests and culture explored in Lovers Rock. To just exist outdoors is to inspire the wrath of racist onlookers. To be so unabashedly happy and themselves, they're forced to stay indoors.

Through just this brief moment outside with Martha, McQueen conveys so much about the tragic motivation behind the joyous party. But other intimate moments in Lovers Rock are of a more touching variety. A big moment involving supporting character Cynthia (Ellis George) had me cheering and yelling "Let's go Lesbians!" The final five minutes of Lovers Rock dedicated to Martha and Franklyn enjoying an early morning bike ride together, meanwhile, totally melted my heart. There isn't an ounce of jadedness here as McQueen depicts infatuation in its purest form. Plus, St. Aubyn and Ward have such cute chemistry together that you could just watch them for hours on end.

These two actors and the rest of the cast inhabit a world where vibrant colors are around every corner. From the clothes characters (particularly Martha and Patty wear) to the bright shades of red found all across the party, Lovers Rock makes excellent use of a lively color palette. The lenses used and the soft lighting further lends a warm look to the whole production. This is a visual approach Steve McQueen hasn't used in his prior films, which have intentionally gone for more subdued color schemes. But Lovers Rock sees McQueen stepping outside of his comfort zone in many respects, albeit while keeping the rich humanity that made prior films like Widows so engaging. McQueen's willingness to experiment artistically pays off outstandingly well with Lovers Rock, a cinematic party so bursting with joy that you'll never want it to end.