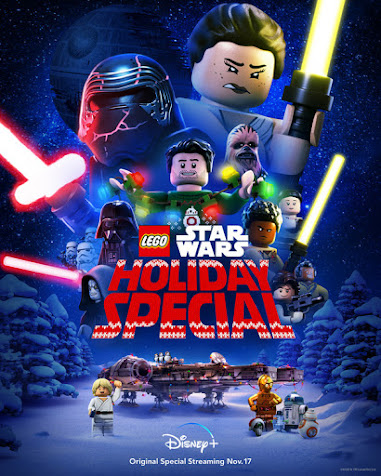 Yes, the Star Wars Holiday Special is back, but this time, in LEGO form! Those expecting a LEGO recreation of that one Jefferson Starship performance should get their expectations in check. The LEGO Star Wars Holiday Special follows a whole new story, albeit one that stills involves Chewbecca celebrating the holiday Life Day with his family. The principal plot involves Rey (Helen Sadler) struggling in being a Jedi master to Finn. While searching for a way to become a proper teacher, Rey stumbles upon a crystal that can open up portals into the past. This leads Rey's to various encounters with pivotal moments throughout the Skywalker Saga and attracts the attention of Emperor Palpatine (Trevor Davall).

Though the presence of a time-traveling crystal may be new, The LEGO Star Wars Holiday Special continues a LEGO Star Wars tradition of smashing together different eras of Star Wars lore for self-referential comedy. This trait was apparent in a 2010 short entitled Bombad Bounty and has continued on into half-hour specials like The Padawan Menace. This makes the comedy of LEGO Star Wars Holiday Special par for the course among LEGO Star Wars specials. However, adhering to this style of levity sucks out the opportunity for this project to stand on its own two feet. The jokes here could have come from any LEGO Star Wars project rather than one related to the holiday season. At least the gags themselves are good-nature and do go all across the saga. No matter which Star Wars movie is your personal favorite, it's bound to get a good-natured ribbing here.

The friendliness of gags doesn't amount to much, though, when originality is in short supply. Star Wars comedy is such well-trodden ground at this point that you have to really bring something new to the table to make yourself stand out. LEGO Star Wars Holiday Special struggles to do just that, even while incorporating characters and events from the recent (and thus not as heavily lampooned) Star Wars sequel trilogy. Particularly egregious in its lack of originality is an ending gag involving Palpatine having a person epiphany whilst flying down the Death Star Two shaft, which is way too reminiscent of a Robot Chicken sketch. The similarity is underscored by how much Trevor Devall's voice work for Palpatine is clearly channeling Seth Macfarlane's Palpatine performance on Robot Chicken.

Jokes related to a Life Day party on the Millenium Falcon are rarely inspired, with some, like a Huttese rendition of Jingle Bells, feel outright cringeworthy. But the better gags here wring some comedic mileage out of juxtaposing the holiday season with the Star Wars characters. These jokes also tend to involve Porg shenanigans, which automatically bumps them up a notch. Plus, it's undeniably nifty to see LEGO mini-figure versions of Chewie's family members Lumpy, Malla and Itchy (all stars of that original Star Wars Holiday Special) make an appearance. Amusingly, though, even a special aimed at children isn't about to have a character be named Lumpy, so Chewie's relatives never get referred to by their names.

No other references to the original Holiday Special appear here as near as I could tell, not even a background came of Bea Arthur's Mos Eisley Cantina bartender. Once again, it's puzzling that the LEGO Star Wars Holiday Special missed these kinds of opportunities to do more unique comedy related to its titular topic. If you're going to do a holiday special, go all out with it, don't just settle for doing what all the other LEGO TV specials have done so many times over. Then again, I suppose kids will laugh more at familiar Empire Strikes Back references than ones to Harvey Korman's cooking robot.