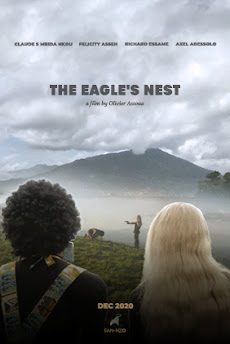 When we first meet Paris (Claude Scholastique Nkou Mbida), the protagonist of The Eagle’s Nest, she’s your usual rebellious teenager. She refuses to say grace before dinner and she flaunts her tongue ring and nose piercing. However, Paris soon finds her life anything but ordinary once her mom and ten-year-old sister are murdered by an unknown gunman. Now the only survivor of her family, Paris craves revenge.

She and her best friend Samantha (Felicity Asseh) are now on the hunt for clues about who could have been behind this slaying. Screenwriters Magno Assoua Adeline and Olivier Assoua (the latter of whom also directs) also incorporate flashbacks to Paris and Samantha’s time as sex workers. These recently involved a client who dropped dead in the middle of a session. That and other secrets in Paris’ life are coming to a head now as she searches for answers behind her mom and sister’s murder.

The Eagle’s Nest is a downright puzzling production. It’s a movie trapped between a variety of creative impulses but only infrequently does it satisfy any of them. On the one hand, The Eagle’s Nest is evocative of all kinds of modern action movies. Its plot feels cribbed from Taken while the use of a “BWAAM” on the soundtrack connects it to modern-day blockbusters. But if there’s any genre The Eagle’s Nest is particularly cribbing from, it’s old-school revenge movies like Blood Debts or Deadly Prey.

The Eagle’s Nest fares best imbuing the outline of these revenge thriller with unique perspective. Those perspectives related to Paris and her desire to leave her hometown. This yearning is established in an early scene of Paris fantasizing with friends about charting a boat to Italy. From there, an impulse to grow elsewhere informs everything Paris does. Whether it’s keeping secrets from her Mom or taking a bag of money, traveling somewhere far away is always the motivation for Paris.

Emphasizing this side of Paris means she gets unique pieces of motivation compared to your average Death Wish sequel. For example, threats to her passport feel as intimidating as Jigsaw threatening to cut off some dudes arm in a Saw movie. Other intimate scenes littered with specific details prove similarly successful. The best of these is a conversation between Samantha and Paris on how to “appear Black”. This sequence  thoughtfully explores the differing perspectives of the two characters while also radiating as something new for this revenge thriller genre.

Unfortunately, the screenplay too often tosses its most distinct qualities on the backburner. The focus gradually zeroes in on being a basic revenge thriller. Paris goes through the motions of hunting down suspects without showcasing her own personality or desires. The script tries to conceal its derivative nature through a non-linear storytelling approach. Yet, it’s all a narrative smokescreen. The reason The Eagle’s Nest feels so formulaic is because it ends up being so formulaic.

By the time we get to the climax, Paris, her desires or any of other sociopolitical elements of The Eagle’s Nest are immaterial. It’s just a conventional action movie finale right down to there being a tied-up hostage Paris must save. All the unique character details have washed away, like tears in the rain. What is the audience left with then?

Well, at least there’s still some strong lead performances anchoring The Eagle’s Nest. Claude Scholastique Nkou Mbida, for instance, makes for a good vengeful lead. Felicity Asseh proves to be the standout among the actors, though. Her portrayal of Samantha shimmers with charisma. Best of all, she has extremely believable lived-in chemistry in her rapport with Mbida. These actors, though, get let down by the most familiar parts of The Eagle’s Nest.

For one thing, The Eagle’s Nest doesn’t improve on its Z-grade creative inspirations as much it probably should. Surface-level approaches to sex workers and gangsters were never cool, to be clear. But they’re par for the course in a direct-to-videos action movie from the 80s. In a 2020 film that dedicates scenes to humanizing immigrant experiences, it’s strange to see such shallow visions of sex workers. Ditto using queer-coding to define who the villain is or explicit on-screen depictions of sexual assault.

If The Eagle’s Nest was going to be such a generic take on the revenge movie, it could have at least had the gall to be fun. Unfortunately, The Eagle’s Nest is still applying a grimly serious tone to what ends up being an average Taken-knock-off. If it was all going to be so glum, couldn’t the focus at least remain on the characters and not a humdrum thriller?

Much like Dead Man Down, The Eagle’s Nest starts out as a promising thriller with a brain before ending as an assembly-line action movie. At least Dead Man Down had the decency to deliver a finale that involved Collin Farrell driving a car into a house. The Eagle’s Nest, unfortunately, is too busy being caught between being a grindhouse and arthouse movie to do anything like that.