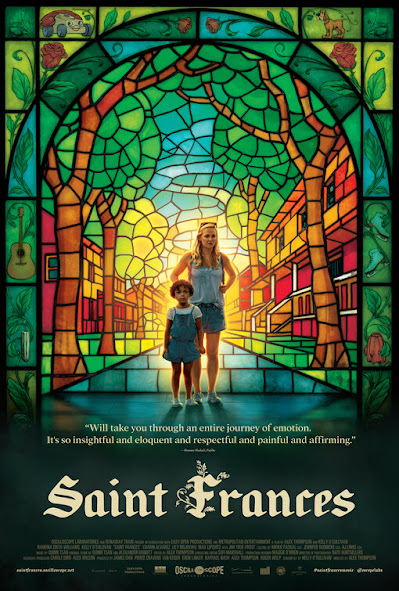 Saint Frances begins by laying every woe its protagonist, Bridget (Kelly O'Sullivan), is going through. How so? Well, through a guy she's talking to at a party. This fellow is telling her about a nightmare he had where he was 34, had no job, no family and no prospects for the future. It was such a depressing existence that, in his dream, the guy committed suicide without hesitation. A nightmare for this guy is an everyday reality for Bridget. She's been struggling to find work and live up to the expectations of what a woman her age is supposed to have accomplished. At least she'll get some income working as a nanny for Frances (Ramona Edith Williams), a youngster with spunk to spare and a candid tongue.

Movies about crotchety adults bonding with precocious youngsters are a dime-a-dozen. Often, they end up like the 2014 Bill Murray vehicle St. Vincent; inoffensive but too beholden to the tropes of the genre to ever be anything memorable. Saint Frances does not have that problem. It takes the basic concept of this subgenre and then blazes its own trail from there. The characters in Kelly O'Sullivan's screenplay are so vividly and singularly defined that Saint Frances is able to contort this subgenre to her needs. Basically, this isn't a paint-by-numbers movie. On the contrary, Saint Frances is the epitome of taking a familiar outline and making it feel brand-new.

Again, so much of this comes down to the characters, particularly Bridget. What a fascinating individual she is. Early on in Saint Frances, Bridget remarks that she doesn't take birth control simply because she hasn't gotten around to it yet. I started squirming in my seat at how relatable that casual procrastination is. Saint Frances is full of moments like that where Bridget really comes to life as a messy character one can relate to. Both O'Sullivan's writing and lead performance are defined by refusing to sand off the messy edges of everyday life. In the process, she creates practically radiates authenticity.

O'Sullivan's realistically messy writing extends to the dynamic between Bridget and Frances. The bond between these two takes time to develop. Their earliest scenes, especially, show, a level of adolescent animosity on the part of Frances that feels ripped right out of the real world. As the film goes on, O'Sullivan finds creative ways for the duo to bond. These include scenes depicting the duo rocking out to Joan Jett music and getting revenge on a loud neighborhood kid. There's anarchic rebellion in these moments, particularly in how they use carrots in their plot for vengeance. But underneath that rambunctious exterior, there is an incredibly sweet emotional connection here between Bridget and Francis that feels totally earned.

Really, one could go on and on about the smart storytelling choices O'Sullivan makes here in Saint Frances. But perhaps my absolute favorite is how she ends up having Saint Frances fixate on the importance of allowing women to be vulnerable. By the end of Saint Frances, it's clear the principal ladies of the story, including Frances' moms Maya (Charin Alvarez) and Annie (Lily Mojekwu), are struggling to live under the burden of societal expectations of how women are supposed to behave. You can't be tired. You can't be disheveled. You must hit this job goal by this age. You can't control whether you have a kid or not. How can one even breathe, let alone live a fulfilling life, with all these crushing expectations?

Saint Frances doesn't even try to solve that systemically-ingrained issue. But it wrings numerous touching moments centering its third act on women finding solace in being open about their vulnerabilities. Maya and Bridget are only able to really connect once they bond over their troubles controlling bodily fluids like urine and blood. The way O'Sullivan's screenplay eventually uses its realistically messy nature to create such unique instances of pathos is tremendously impressive. A feature that was once used to properly Bridget's social awkwardness and anxiety is now being utilized to bring the characters of Saint Frances closer together.

The outstanding writing of Saint Frances is brought to life through thoughtful direction from Alex Thompson. His hands-off nature as a filmmaker isn't the most bombastic approach as a filmmaker but it proves an effective one here. This technique allows the characters to be front-and-center at all times, Bridget and Frances are never overwhelmed by overly flashy camera movements. Plus, he conveys a grounded sensibility in his direction that matches the realism of the script.

Above all else, though, Thompson's direction should be commended for getting such an incredible performance out of Ramona Edith Williams. She steals every scene she's in with her terrific sense of comedic timing and her dynamic with O'Sullivan is top-notch. Williams' performance as Frances is yet another unforgettable quality of Saint Frances. Movies about crotchety adults bonding with precocious youngsters are a dime-a-dozen, it's true. Movies as outstanding as Saint Frances, though, are not.