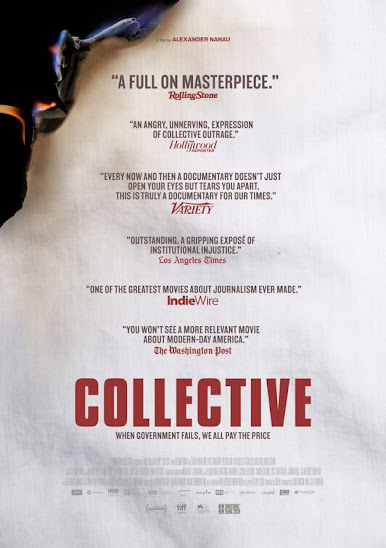 A fire spurs the events of the documentary Collective. The audience is privy to video footage of this fire as it happened in real-time. It all happened on a seemingly ordinary night, with everyone enjoying a concert inside a Romania club known as Club Colectiv. During the performance, a fire began to break out that audience members initially thought was just a pyrotechnic effect. The video shows that panic quickly spread inside the building as the fire consumed everything in its path. The most chaotic part of the video shown in Collective sees the camera shaking to such a degree that the viewer has no idea what happening. We're as unsure of what's going on as the people inside the club that fateful night.
26 people were instantly killed in the nightclub tragedy while an additional 38 were killed in the aftermath of the event due to the severity of their injuries. A further 146 were wounded from the tragedy. The lack of proper care for the wounded, which led to the 38 additional deaths, revealed longstanding problems in Romania's healthcare system. A team of journalists at a local sports Gazette, led by Catalin Tolontan, begin to do some digging. In the process, they discover that these deaths were the result of hospital mismanagement and the use of diluted disinfectants on the wounded. Collective chronicles these journalists in their investigation, which keeps uncovering whole new layers of terrifying corruption.

Collective is like a classic investigative drama like All the President's Men playing out in real time. This is reinforced by how Collective doesn't use traditional documentary techniques like characters addressing the camera, on-screen text explaining who people are or narration. This is a much more restrained affair that evokes journalism thrillers...to a point. Those movies tend to feature the antagonists getting their just desserts. Collective is a documentary much more in tune with chilling reality. Director Alexander Nanau constantly emphasizes how few satisfying answers Tolontan and his team find in their diligent work. Cracking big revelations doesn't lead to bad people going to jail. It just leads to the powers-that-be cracking down and making sure no other info leaks.

This is most clearly seen when the team pinpoints a figure behind the lack of hospital accountability by the name of Dan Condrea. This guy never even gets to stand trial for his actions. He mysteriously commits "suicide" under conditions that immediately lead to speculation that he was murdered before he could talk. It's utterly terrifying to watch these kind of developments play out in Collective. The whole movie is just one punch in the gut after another, which is extra true thanks to occasional looks at one of the survivors of the fire. This woman, now living with a prosthetic hand, emphasizes the human cost of government negligence. This is why these journalists continue in their pursuit of the truth.

Sequences dedicated to this woman keep the human element of Collective apparent while Nanau's quietly impressive filmmaking is further apparent in the aforementioned lack of explanatory devices like narration or on-screen text. These prove extra effective in ensuring there are no distractions from the grim reality Nanau's camera paints. Meanwhile, shifting to the perspective of Vlad, a newly installed minister of health, in the last third of Collective manages to pay off because of how well it shows how deep this health system corruption goes. Tolontan and his fellow journalists have been on the outside fighting for justice. But Vlad finds it no easier fighting for the same cause on the inside. Apathy has taken root in powerful figures, thus ensuring that further horrors like the Club Colectiv fire will happen again.

A documentary with wall-to-wall grimness like Collective might not sound like ideal viewing for anyone right now in a world rocked with so much hardship stemming from the coronavirus. But much like fellow  2020 documentary Time, Collective is a movie that's as hard to watch as it is essential to watch. A movie that captures the horrors of reality, and the human costs of those horrors, so well needs to be seen. This trait is especially apparent n Collective's final scene. Much like the end credits needle drop of Transit, Collective's final moments take an American song and imbue it a whole new level of chilling meaning. I'll be thinking of Collective's devastating ending and the rest of this exceptionally well-made documentary for a long time to come.

Collective is now available for rental and purchase from digital retailers.