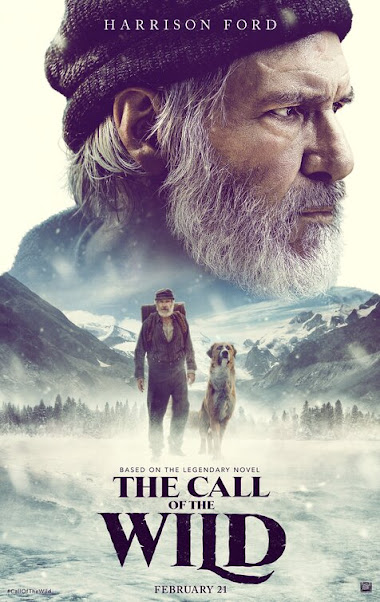 Based on the 1903 novel of the same name by Jack London, The Call of the Wild follows the story of Buck, a dog who once belonged to a judge in Santa Clara, California. Here, Buck, much like Beethoven and Marmaduke before him, caused a lot of ruckus due to his big size and even bigger energy. Buck is eventually abducted and sent to the Yukon. This city dog is now being given a crash-course in the wild as he's taken in as a sled-dog by Perrault (Omar Sy). Eventually, Buck finds his way to John Thornton (Harrison Ford), a man whose still reeling from the loss of his son. Thornton's only real companion these days is a bottle of whiskey. But in Buck, he may find a friend who can help take him on an adventure like no other.

The Call of the Wild is a competent production. It rarely exceeds that, but credit where credit is due, it's never grating. Among family movies, that alone is a gift. Give a parent the choice between motor-mouth Chipmunks belting out pop tunes and the silent Buck learning to embrace his wild side, it's no contest. Michael Green's screenplay has its dumb qualities, including the unnecessary inclusion of Dan Stevens as a human antagonist to hunt down Buck and Thornton in the third-act. However, at least he happily entirely avoids lazy pop culture references and bathroom humor. Plus, despite covering a lot of ground in a 100-minute runtime, the script for The Call of the Wild avoids feeling rushed. Meanwhile, Chris Sanders, the Oscar-nominated director of animated films like Lilo & Stitch, makes a decent leap into live-action filmmaking.

Best of all, Harrison Ford isn't phoning it in here, that's always a pleasant sight. Playing off a digital co-star (one performed on-set by Terry Notary) in a movie aimed at children, Ford, thankfully, never takes those qualities as an excuse to sleepwalk through the part of John Thornton. There's a sense of tangible aching in Ford's portrayal of a guy whose lived with grief for so long that it's become a part of his personality. Best of all, a man famous for his public image as a loveable curmudgeon has some real warmth in his scenes with Buck.

Unfortunately, while Ford''s chemistry with Buck is believable, the canine himself isn't. Herein lies the biggest problem with The Call of the Wild, the choice to have Buck and all other animals be rendered with ultra-realistic CGI. Sometimes, one can grow to tolerate initially off-putting visual effects when you're watching it over the course of a film. Buck and his canine comrades never achieve that. There's always something just off about these animals. Sometimes it's the way wet fur looks. Other times it's the dissonance between Buck's realistic appearance and his movements that suggest weightlessness. Still other moments see Buck just looking more like a statue than a believable canine.

Even I, a person who shouts "DOGGY!!" without fail whenever a dog enters a movie or TV show, was left rather cold by Buck. He just conjures up the Uncanny Valley too much to ever really warm your heart. That realistic CGI approach has also been taken for the majority of the exterior Yukon environments. Like Buck, these domains probably would look OK in a visual effects test reel but fail to conjure up any emotions within the context of a movie. Too many times it look likes Buck and his human companions are wandering around a screensaver. Compounding the puzzling visuals is how Janusz Kaminski is in charge of the cinematography. This is only his second non-Steven Spielberg film since 2010 (following The Judge) yet it's hard to see why Kaminski took the job. The hollow digital environments offer him so little to work with.

Rare flashes of more stylized animation offer a glimpse into a more interesting take on a CGI-heavy version of The Call of the Wild. A black wolf representing Buck's wild spirit and a gigantic tree where a wolf pack resides are both detached enough from reality to warrant being rendered in animation. It's easy to imagine a telling of The Call of the Wild where CGI is used to realize a version of the Yukon that uses stylized imagery to capture the dangers of this chilly land. Instead, The Call of the Wild tries and struggles to use CGI to emulate boring old reality.

In the process, The Call of the Wild undercuts its best qualities, including Ford's lead performance, a script that admirably refuses to talk down to kids and even Sanders' gifts as a director. In his prior animated films like Lilo & Stitch, Sanders had no inhibitions about tapping into the unique qualities offered up by the medium of animation. Doing this didn't call for sacrificing moments of poignancy. On the contrary, a furry blue alien who could never exist in the real world registered as far more human than The Call of the Wild's eerily realistic CGI dog. The Call of the Wild is certainly better than your average family movie, but it's also a prime example of how all the VFX hardware in the world can't make a character real.

Posted by Douglas Laman (NerdInTheBasement) at 10:42 AM