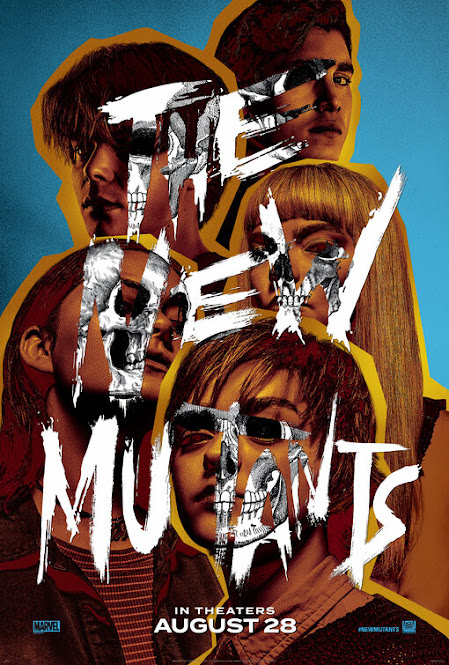 With Guardians of the Galaxy, superhero movies proved they could also be bawdy cosmic adventure movies.

With Spider-Man: Into the Spider-Verse, superhero movies proved they could be home to the unparalleled visual imagination.

And with Suicide Squad, superhero movies proved they could be home to total dumpster fires.

Considering how many Hollywood produces, it shouldn't be a shock that individual superhero movies are constantly pushing the boundaries to see what this genre can accomplish. With The New Mutants, writer/director Josh Boone is taking a group of mutants adjacent to the X-Men and applying them to a horror movie yarn. The result is an odd mess that doesn't congeal together. But the admirable ambition that drove Boone and company to even try this mixture in the first place does result in some memorable moments.

New Mutants begins with teenager Danielle Moonstar (Blu Hunt) undergoing a horrific experience. After getting chased by some kind of being and watching her father die, Moonstar awakens in a hospital. Now watched over by Dr. Cecilia Reyes (Alice Braga), Moonstar is told that she's a mutant and that she needs to be watched over as she comes to terms with her superpowers. The only other people in this hospital are fellow teenage mutants Rahne (Masie Williams), Samuel (Charlie Hutton), Illyana (Anya Taylor-Joy), and Bobby (Henry Zaga). As Danielle tries to figure out what her mutant powers are, she also begins to suspect something might be up at this hospital.

As a horror movie, The New Mutants doesn't really work all that well. Little of it is all that chilling and it mostly reminded me of one of the weaker Blumhouse movies like Incarnate or The Darkness. Part of the problem is that Josh Boone and Knate Lee's screenplay tries to wring eerie ambiguity out of a situation that lacks any uncertainty. Could the hospital devoid of any other people that's also coated in minimal lighting and dark colors possibly be sinister? The New Mutants attempts to play that question for scares but it just means the audience is way ahead of all the on-screen characters. Boone's directorial skills also undercut moments of horror. His filmmaking relies too often on leaning on tired sources of horror (like a vision of a priest acting decidedly un-priestlike) rather than something more original.

On the other hand, taking The New Mutants as a superhero movie, some virtues do emerge. For one thing, committing to a limited cast is an interesting novelty in a genre that too often gets dragged down in bloat. For another, the grim elements that are pretty rote for a horror film are more unique in a superhero tale. Countless horror films feature people expressing remorse over murder, but that's not something you'd see in, say, an Ant-Man movie. Then there's the climax, which is really where New Mutants just abandons the pretense of being a horror film. Here it just becomes another superhero movie, complete with a final showdown where the protagonist fights a CGI being while dropping pop culture quips.

However, that's also the best part of the movie. The visuals used to render the villain Demon Bear and Illyana's superpowered form are nifty. Knate and Boone do a decent job keeping track of the characters in the middle of the mayhem. Best of all, the eventual resolution between Danielle and Demon Bear is actually extremely well-done both thematically and visually. It's probably the most inspired element in the whole production, alongside the welcome presence of an explicitly queer relationship between Danielle and Rahne. Even after this fun climax, though, The New Mutants still wraps up on an awkward scene that ends the movie just as it seems to be starting.

Yes, The New Mutants pulls an Artemis Fowl or Hellboy (2019) by delivering an ending that promises, next time around, you'll get the movie you wanted to see. What a bummer. Of course, it's not like The New Mutants was a smooth ride prior to this underwhelming ending. The New Mutants is really never bad and shows a lot more ambition than about half of the proceeding X-Men movies. But all that ambition can't paper over its noticeable cracks. Such cracks include how the arc for abrasive supporting character Bobby is just so rushed and the clumsy means used to realize Rahne's wolf form (her mutant power is that she can transform into a wolf).

Despite carrying a $60+ million budget, The New Mutants treats her superpower like it's a network TV drama. We never see her fully transform into a wolf and awkward cut-aways are used for the transformation. If you didn't know her superpower before watching The New Mutants, it'd be understandable if you walked away confused about what Rahne's mutations even was. This botched visual element reflects Boone's difficulties behind-the-camera on The New Mutants. The low-budget restrictions of this outing see him resorting to a number of insipid visual cues, including derivative horror movie imagery.

If nothing else, it feels appropriate for such a conceptually gutsy but messy-in-execution project like The New Mutants to close out Fox's version of the X-Men franchise. This series began with an entry whose opening scene proved superhero movies could tackle grim material in a post-Batman & Robin world while also delivering a script that shortchanged its supporting characters. This series has been erratic in quality from the start, juggling noble ideals with messy execution to the very end. Like so many of the proceeding X-Men movies, the way The New Mutants swings for the fences is endearing. The execution of the actual movie, much less so.