For kids and adults alike, Over the Moon is a trip worth taking 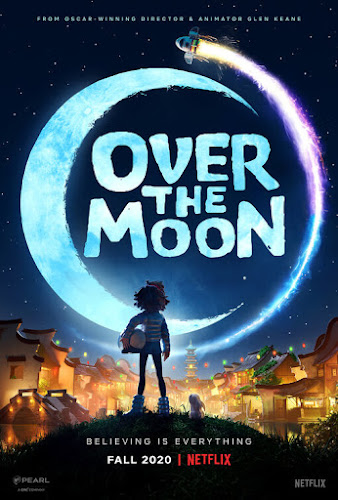 MILD SPOILERS AHEAD
Legendary animator Glen Keane was the original director of Tangled. His intent for this project, then titled Rapunzel, was to push the boundaries of computer animation. Keane was a veteran of hand-drawn animation and he wanted to bring that medium to the world of CGI. In a 2005 interview, Keane explained how Disney was creating new technology to make the world of computer-animation more malleable and evocative of hand-drawn artwork.
Given that Keane had no involvement in the final version of Rapunzel, it's hard to say if it fulfilled his artistic dreams. As someone whose long been aware of Keane's ambitions, though, it was quite something to watch Keane's directorial debut Over the Moon and realize that this guy had finally done it. What we have here is the manifestation of all those hopes Keane had for CG animation years ago.
Over the Moon concerns Fei Fei (Cathy Ang), whose still reeling from the passing of her mother, Ma Ma (Ruthie Ann Miles), from four years prior. Though Keane has moved from Disney Animation to Netflix Animation with Over the Moon, he still can't resist Disney's penchant for killing off moms! Anyway, Fei Fei is distraught over her dad, Ba Ba (John Cho), moving on and falling in love with a new woman, Mrs. Zhong (Sandra Oh). Doubly troublesome is that Mrs. Zhong has an eight-year-old kid named Chin (Robert G. Chui) that Fei Fei sees as super annoying. With all this change to deal with, Fei Feig gets an idea; she'll take a rocket to the moon and prove that the Moon goddess, Chang'e (Phillipa Soo), does exist.
You see, not only is Chang'e a figure that Ma Ma used to tell stories about to a young Fei Feig, but Chang'e's whole thing is that she's only in love with one man. If Fei Fei brings back proof of Chang'e's existence, it could be enough to convince Ba Ba to not abandon Ma Ma for someone new. Fei Fei and unwitting stowaway Chin blast off to the Moon in a rocket, where they find themselves in a race against time to appease Chang'e and get the proof Fei Fie desperately wants. Might there also be a lesson or two about learning to let go in there? Far be it from me to drop spoilers...
If you're gonna watch Over the Moon, it should be just for the visuals. The Earthbound scenes in the first act are more traditional-looking, sure, save for some welcome hand-drawn animation used to render Fei Fei's internal thoughts. But once the characters get to the moon, Over the Moon turns into a feast for the eyes. Bright colors dominate the screen and reality is thrown to the wind. The domain of Chang'e is not interested in replicating the real world, it merely wants to provide unique and lovely looking imagery. Plus, it all doesn't look like the same cookie-cutter computer-animation. Different characters adhere to different visual styles and different rooms of Chang'e's palace have entirely different aesthetics.
All of that glorious animation provides a great compliment to the script by screenwriters Audrey Wells, Alice Wu and Jennifer Yee McDevitt. The trio of writers shows a lot of imagination in coming up with a whole barrage of luminous new creatures and environments for Fei Fei to encounters. How many movies set on the moon involve an army of flying frogs or motorcycle-riding poultry? This level of bravura is furthered reflected in the musical numbers of Over the Moon, which, thankfully, make no apologies for being musical numbers. The songs, penned by Christopher Curtis, Marjorie Duffield and Helen Park, don't contain lyrics that could belong to any run-of-the-mill pop song.
Instead, they relate specifically to the characters and nicely convey important plot details, like the opening number Mooncakes that takes us through Fei Fei's happy home life all the way up to her Mom's passing. The most surprisingly affecting of these tunes turns out to be Wonderful. Sung by Ken Jeong as a green dog, the lyrics use elegant simplicity to cut through the complex experiences of coping with the loss of a loved one. It certainly got me all choked up and is worthy of being called, well, wonderful.
If there is a downside to Over the Moon, it's that, as a whole, it does feel a bit more like enjoyable individual pieces rather than an enjoyable cohesive whole. This doesn't really become a problem until the ending when big emotional pay-off's don't quite hit as hard as they should because of the disparate nature of the story. In particular, Fei Fei and Chin's big emotional resolution rings hollow because the two characters have been separated for so much of the runtime. We haven't been able to watch them grow closer as characters so how can we buy that they've come to love each other?

Even with an awkward march across the finish line, Over the Moon's visual wonders and memorable tunes make it a cut above your standard animated kids' movies. All these years later, Glen Keane's hopes of taking computer-animation to new and bold places has been realized with Over the Moon.

Posted by Douglas Laman (NerdInTheBasement) at 9:40 AM