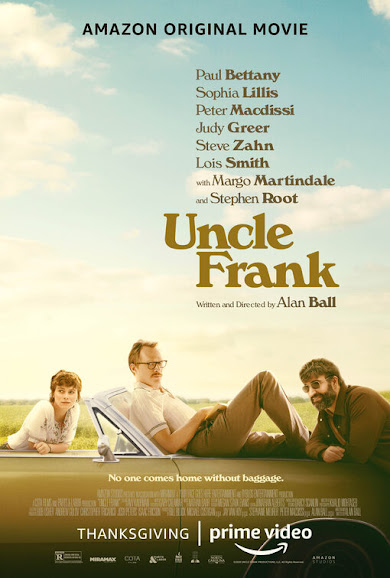 Uncle Frank begins with fourteen-year-old Beth Bledsoe (Sophia Lillies) wandering through her house, which is packed to the gills with family members. Among those family members is her uncle, Frank Bledsoe (Paul Bettany). Rather than showing us the kind of relationship the two share, Alan Ball's screenplay opts to have Beth tell the audience in voice-over surface-level character traits of Frank and that she's close with Frank. Subsequently, we see that Frank is the black sheep of the family thanks to her grandfather, Daddy Mac (Stephen Root), always treating him so cruelly. Frank just doesn't belong here.
Flashforward four years and Beth is now a college student living in New York City. She goes to the same university that Frank teaches at. While crashing a party at his apartment, Frank reveals to Beth that he's actually gay. In fact, he's been dating Walid “Wally” Nadeem (Peter Macdissi) for nearly a decade now. This revelation comes just as Beth receives news that Daddy Max has died. Though he initially wants nothing to do with the funeral, Frank is forced to drive Beth back home. Returning back to his Southern hometown, Frank struggles to cope both with his tortured past and his troubled present.
Alan Ball's screenplay for Uncle Frank confounds on numerous levels. For one thing, why is Beth the protagonist? Having a straight person be the audience point-of-view protagonist for a story about a queer person is already a tired idea on its own merits. But Ball's script can't even give the bare amount of justification for why Beth is the lead. She's already on good terms with Frank at the start of the film and quickly accepts his sexuality, so it's not like going on a road trip back home will set her down a character arc related to acceptance. Nor does she learn anything new about herself whilst going on a journey with Frank.
Amusingly, even Ball's direction in Uncle Frank seems to realize that Beth is so extraneous to the proceedings. During tense arguments between Frank and Wally, the camera will sometimes randomly cut to Beth just sitting in a chair in the back of the room. It's as if Ball wanted to remind viewers that, yes, Beth is still a part of the movie. As near as I can tell, Beth is only the lead character because she's the most prominent straight person in the story. When a character's screentime is being dictated by how hetero they are and not by how they contribute to the story, that's how you know you're watching a finely-tuned screenplay.
Making Beth the lead character of Uncle Frank is a microcosm of the tired storytelling details that plague the whole darn movie. Among the most frustrating of these elements are the details used to signify Frank as a tormented person. Midway through the movie, Frank is abruptly revealed to have a drinking problem, because he doesn't have enough agony to deal with. Frank also keeps having flashbacks to a traumatic teenage experience throughout the story. These are doled out throughout the movie in bits and pieces. Needless to say, all the build-up over what's been haunting Frank all these years is pointless. Viewers will know where these flashbacks are going long before the big reveal.

On and on the puzzling writing choices in Uncle Frank go, which include the decision to have the first-half of Uncle Frank center on sexually ribald dialogue. Numerous references to erections and oral sex abound. Now, I'm not at all opposed to sexually frank comedy. In this context, though, it proves awkward since Uncle Frank drops that kind of dialogue immediately once the halfway mark hits. Once the third act dovetails into being a Hallmark movie, one can't help but wonder what the hell was up with all the quasi-Kevin Smith dialogue. It's just another confusing element of a production that wouldn't know its own head from its tail.

Ball's generic direction only further compounds the problems of Uncle Frank. Ball can't let any big emotional moment go by without playing things in such a gratingly broad manner. The performances must be over-the-top; the camera must be inches away from people's faces; Nathan Barr's score must drown the audience's ear in treacly music that makes it obvious that we're watching something "important". It's all fine for making clips made exclusively for Oscar nomination reels. In any other respect, though, the filmmaking for Uncle Frank only exacerbates the problems found in its screenplay.

All of these shortcomings leave a stacked cast (Judy Greer, Margo Martindale and Steve Zahn all play supporting roles) with nothing to work with. Peter Macdissi fares best out of all the actors. Though he gets some of the worst hackneyed comedy lines, Macdissi lends a believable warmth to Wally that's extremely endearing. His best moments inject Uncle Frank with a kind of humanity it's otherwise totally missing. The ham-fisted narration of Uncle Frank's opening scene turned out to be a bad omen. It foretold a movie so clumsily written that its script would saddle its titular character with a generic tragic backstory and then shove him into the background of his own story. That kind of fatal flaw is just one of the many ways Uncle Frank goes so tragically awry.