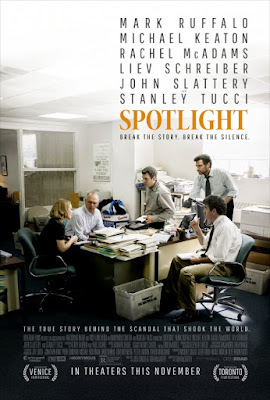 Man oh man, do I love it when a movie like Spotlight lives up to the hype, especially when it carries a cast of this caliber and a director like Tom McCarthy. This guys 2011 feature Win Win was a real treat, an emotionally gripping and surprisingly layered tale that, to me, indicated that a truly special direct had entered the land of American cinema. I may be on the minority on this, but his follow-up project, The Cobbler, did not resonate with me at all, but luckily, Spotlight seems to be as clear of a sign as any that that Adam Sandler feature was an enormous fluke.

Working with far darker story material than either of his past two directorial efforts, screenwriters McCarthy and Josh Singer manage that rare feat of tackling a real life tragedy and executing it as a narrative feature without making it feel like sensationalism or a tone-deaf endeavor. The perspectives of the victims aren't eschewed for humdrum contrived drama (Perfect example of this? The Blind Side, which aggravatingly took the tale of Michael Oher and made it all about Sandra Bullocks Leigh Tuohy), with instead no expense being spared in detailing the story of four journalists (who are part of a group called Spotlight that do in-depth investigations for The Boston Globe) who stumble upon how the Catholic Church had been covering up the fact that numerous priests had molested children.

This horrifying realization turns out to be far bigger in scale (stretching far beyond their town of Boston) than any of the individuals involved at the newspaper could ever imagine. Having journalists play the audience surrogate in this situation is a stroke of genius, as their very occupation involves interviewing people and getting their insight into various issues of varying degrees of severity. Here, that part of the job becomes crucial to some of the movies most intense scenes, as victims of molestation recount their encounters in horrifying detail, allowing the viewer to get a glimpse into the terrifying activities that have been occurring under everyone's noses for ages.

Another perk of having journalists be at the center of the plot is that their quest to uncover information about this scandal lends an absorbing tension laced rhythm to the film. Each new piece of information they uncover manages to shed light not only on the shocking scale of these atrocities, but also enhance the individual personalities of the journalists doing this investigative work. Much of the riveting tension in these scenes comes from the ensemble cast with a number of underrated talented actors (Rachel McAdams, Liev Schreiber, Stanley freaking Tucci) assembled and utilized to their fullest potential under McCarthys direction. The best amongst this excellent ensemble cast has to be Mark Ruffalo, playing Mike Rezendes, a guy who, when it comes to chasing a story, won't back down without a fight or two.

As the plot marches onward, Ruffalo does a remarkable job executing a growing sense of despair in Rezendes, whose understandably shocked that something like this has been buried and ignored for so long. Right alongside Ruffalo, in terms of turning in a layered performance, is Michael Keaton, playing the old pro in the Spotlight crew. Keatons always a pleasure in whatever movie he pops up in (remember his underrated supporting turn in The Other Guys?), and Spotlight helps show that Birdman was no fluke, that this guys still got dramatic chops to spare.

Taken just as a basic conceit, Spotlight offers up some great potential to create something really cinematically worthwhile, and I'm pleased to report that such potential has been realized in a most gripping fashion. Not to dabble too much in extraneous hyperbole, but Spotlight serves as a fantastic demonstration of how to properly create, pace and execute tension in a story in order to keep your audience as intensely absorbed into your plot as possible. Basically, this is just damn good filmmaking, the sort that's kind of like catnip for film aficionados like yours truly.
Posted by Douglas Laman (NerdInTheBasement) at 2:15 PM